From Anytime, Anywhere towards All the Time, Everywhere

Some of us might have noticed social changes through the intensive use of smartphones. The anytime and anywhere connection seems to make us overly ambitious when it comes to satisfying our social needs. Phone in the pocket, out the pocket, in the pocket, out the pocket, why not leave it on the table all the time? The consumer market of wearable technology (i.e. smartphones, laptops and so on), is recently getting complemented by various body worn devices. These devices are engineered or at least marketed for practical use, think:Google glasses, Memi bracelets, Hexoskin clothes and Apple watches.

New in the field of wearability is the MOTA Smart Ring, on 5 September 2014, the ring got unveiled at the major electronics consumer event ‘IFA’ in Berlin. It is a SmartRing that functions as an interface between persons wearing the ring and their smartphones: ‘[o]nce paired with an Android or iPhone, MOTA SmartRing users can receive notifications of incoming calls, text messages, calendar notifications and email’ Besides, the ring provides updates of social media platforms such as Facebook and Twitter. As such, the MOTA SmartRing is a body worn device, which predicted need is influenced by prior experiences based on the use of smartphones. The MOTA SmartRing allows access to information, all the time and everywhere, even during situations when smartphone interactions are impolite or impossible.

One Ring to rule them all, One Ring to find them, one Ring to bring them all and in the darkness bind them

A comparison between the artefact ring of Sauron (Lord of the Rings) and the MOTA SmartRing might be a bit far sought, yet, it could open doors towards a critical analysis of possible social effects. The impact and consequences of Sauron’s ring are related to western philosophical issues, pertaining to power relations existing outside the sphere of fantasy. Whether we analyse Plato’s ring of Gyges, Tolkien’s ring of Sauron or Wagner’s ring of Wotan, all of these mythical/fantasy stories demonstrate a certain double bind: on the one hand, the ring empowers its wearers as they are able to control. While, on the other hand, the wearers become – at different levels – dependent on the power of the ring.

Back to the inscription on the Sauron’s Ring; in what sense is the MOTA SmartRing wearer able to rule, find, bring together and bind, in other words, empower it’s wearer? Lets start with the last part of the inscription, the MOTA SmartRing brings all personalized social interactions – text messages, calls, and social media updates – together, displayed on a body worn interface. As Sauron’s Ring, the MOTA SmartRing is perfectly plain, only when a notification comes through, texts or icons appear. Furthermore, the wearer is able to rule, in terms of control, the displayed notifications:

Users decide for themselves exactly who they want to talk with and which events they wish to be updated about. […] The SmartRing provides maximum discretion over notifications, letting the wearer enable and disable audible and tactile alerts. 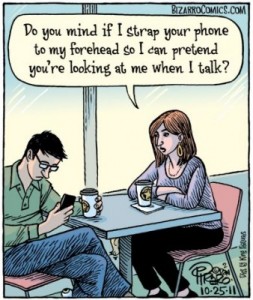 The MOTA SmartRing enables its wearer to stay connected, even when the smartphone itself is not visible. ‘Silicon Valley design outfit MOTA believes that in order to stop people checking their phone during conversations, notifications need to be buried somewhere even less obtrusive (and visible) than on a smart watch’. The need to constantly check your smartphone for social interaction is explained by Ting et al. as stemming from ‘concerns about being socially disconnected, uninformed and excluded from friends and their social activities’ (195). Although this casts a rather negative light on the dependency itself, from the perspective of Silicon Valley, the MOTA SmartRing could still have a positive impact on social behavior, because it is less obtrusive and does not disrupt traditional face to face interactions. Taking this into consideration, we find ourselves back at the double bind of the ring, does the ring give its wearers more benefits, or does it increase/enable dependency. If a smartphone user – in absence of the phone – does not have the fear of missing out, of losing social control, will he or she, then, be less distracted from engaging in traditional social behavior?