About Chaïm Wijnberg
If you would like to know more about me, you can always ask or Google me.

Researches have recently published an article where they have done an experiment with some kind of technological telepathy. A man in India wearing a BCI (Brain-Computer Interface), has successfully transmitted different kind of words through thoughts to a man’s mind in France, who was wearing a CBI (Computer-Brain Interface). The words were decoded using the 5-bit Bacon Cipher, and were transmitted via the internet. The picture below shows a schematic overview of how it works.

Cyborg in the making

Since the 50’s people talk about machines and/or computers and also if they will dominate human kind. Numerous examples can be found by academics and even a U.S. president addressing that humans should not lose control. In the article of Alan Turing Computer, Machinery and Intelligence he questions if machines can think and which is human and which is machine? In his article also ends with the question if machines will ever compete with humans (460)? In the case of this object that uses TMS (Transcronial Magnetism Simulation), the question is definitely not outdated. Because TMS stimulates the brain with magnetism, it can make you feel in a kind of way. So is the machine in control or the human…?

There is also another question that can be asked. If there is some kind of machine controlling the subject, does he still has some kind of human identity or is it lost? Hans Moravec addresses this question by saying that the human identity is made out of informational patterns. In fact this is kind of what the scientist did with the brain. They decoded thoughts into the 5-bit Bacon Cipher. Therefore knowing that a thought always goes through some kind of pattern. Interesting is the fact that Moravec also says that his proposition can be demonstrated by downloading human consciousness into a computer. In a way that is what also is happening in the experiment. In fact Moravec is trying to prove that the machine is a container where you put in the human consciousness (Hayles xii). In other words, the computer is turning in a way human, and the subject is turning into a machine… In fact can the subjects be seen as some kind of cyborgs? Donna Haraways says in her Cyborg Manifesto that ‘a cyborg is a cybernetic organism, a hybrid of machine and organism, a creature of social reality as well as a creature of fiction’ (149). The article where I read about the object had in fact a picture of Charles Xavier (a.k.a. Professor X) and known for his telepathy-force. So the subjects are being compared in the article as creatures of fiction. Also, the fact that the subjects can’t move and need to stay connected with the machines in order to transmit and receive (as you can see in the picture below), state that they are a hybrid of machine and organism, a cyborg in the making.

Does this mean that the subject are not human anymore? Katherine Hayles says in How We Became Posthuman: Virtual Bodies in Cybernetics, Literature and Informatics that there is perhaps a shift from human to posthuman. She associates a human with someone with a free will, rational, autonomy and consciousness. Posthumans are according to her ‘…constructed as an informational pattern that happens to be instantiated in a biological substrate’ (160). With the scientists decoding the brain in binary code, we become/became posthuman.

Could this device be the future? Will there be humans in the future with this object on their head and talk to each other only by thinking? Are there no risks involved? Now there is already according to Hayles a shift in boundaries between human and machine cognition. Machines play already a big role in finding informational patterns. According to James Bamford, the NSA computer takes in 2 million pieces of communication per hour. Only when an informational pattern reaches a certain level of threat it will be examined by a human (Hayles 161). Does this mean that in the future I described a computer will analyse our thoughts, or some kind of information patterns? Perhaps we will live in a world where computers will take control over our lives (if it did not already happened). Anyhow, I think that in this future the discussion will again be like in the 50’s, if the machines are not taking over control. 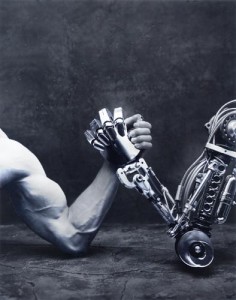