Amsterdam. Capitol of the Netherlands, known for cultural highlights as the Rijksmuseum, the Anne Frank House, the canals, fleamarket on Waterloosquare and an infinite number of bikes. The last twenty years the number of bikes has grown so much that this has increased with 40% so that the municipality of Amsterdam was eager to find solutions for the streets that were strewn with bikes. Additionally to the initiated policy to improve bike facilities, all transportation options were scrutinized so that it couldn’t take long before Uber perched in the city last year.

Uber is an on-demand taxi service which was originated in San Francisco four years ago as a solution to the crowded streets and overpriced taxi’s. Distinctive to regular cab companies is that Uber eliminates the barrier for drivers to possess a taxi-license which results in a wide range of Ubertaxi’s with short response time. Ordering cabs is easy due to an app which also locates Ubercabs and stimulates sharing, in addition to a lower price range compared to regular cab companies which includes a snack, drink and some reading material in the back of every Ubercab. Nowadays, Uber is launched in 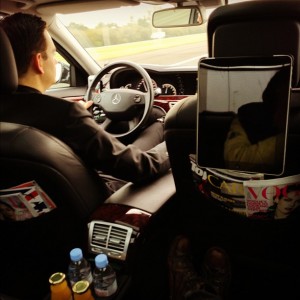 seventy cities worldwide and claims to create 50.000 jobs a month ‘connecting hundreds of thousands of partners to the system’. The sales tactics are aggressive but effective and customer-oriented, noticeable to their recently launched lunch-service, and aims at expansion in the Netherlands next year. By this, Uber can be seen as a platform pur sang, according to Gillespies description of platforms(Gillespie 2010). “Those companies…provide storage, navigation and delivery of the digital contents to others, are working to establish a long-term position in a fluctuating economic and cultural terrain”. Platforms present themselves as a service while a discursive rhetoric to commerce is detectable. But let’s be honest here. A cheap and reliable cab which offers you comfort and is easily accessible and traceable via your smartphone, who wouldn’t want that?

Image 1:First cab of @uber in the Netherlands! Never driven in such a luxurious cab

Taxi 2.0
The concept of Uber aligns with the main conclusion of the Mobile Convention 2014, so states Frankwatching, an online trend watch platform: the smartphone is much more than just a phone, it combines the offline and online world as a symbiosis. This development diminishes the binary conceptualization of the “offline”(real) and “online”(virtual) world which Jurgenson stated as a fallacy, and makes way for an intertwined “Augmented Reality”(Jurgenson 2011). By this, critiquing new media should begin with the idea of “Augmented Reality”, and by that, according to Jurgenson, can be argued whether reality that is augmented is good at all. 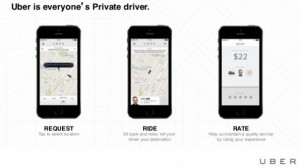 Uber and privacy
The good or the bad can be defined in legislation. Uber experiences difficulties in several countries and got prohibited in Germany two weeks ago which is based on the absence of the obliged taxi-license, unfair concurrency and privacy concerns. Oddly enough, the Dutch government shrugged of all this objections. “On the contrary, this kind of companies are required to shake up the established relationships” according to several coalition parties. “Innovation can’t and mustn’t be stopped” and the promises of Augmented Reality for instance has to get the chance to unfold. It’s unknown how long this conception will last, since Uber connects costumers to drivers which includes personal information like phone number and GPS tracking access, while it’s not certain what happens with that information and the costumer during registering doesn’t have to authorize Uber for execute such activities. This underlines a current debate concerning privacy. What information can be captured and thus processed and what cannot? Agre describes this as “Grammars of Action” which in short addresses the process of programming whereas the logic of programming isn’t just technical, but socio-technical due to a dominant overtone of market relations over personal information that can be captured(Agre 1994). The “front-end” in full compliance to Web 2.0 characteristics is enabling interactivity to get your taxi 2.0 included with safe, digital payment and GPS coordinates, but is the donating of all this data really necessary since the programming of such platforms are socio-technical(Stalder 2012)? Or will Uber, just like the cultural highlight as the Dutch marihuana tolerance policy, exist but get more and more restricted while it beautifully converges technology and the real world? Clearly the battle of Uber containing their limits or existence at all is not at an end. So let’s open the discussion addressing Uber, and let our infamous “poldermodel” run heyday.

Stalder, Felix. “Between democrazy and spectacle: the front-end and the back-end of the social web”. The social media reader. New York: New York university press, 2012. 242-256.