Panoptibook is a new media research project. [It] is not a real social platform: it is a website that just looks like a social network. The intention is to approach what a ‘social’ network would look like if a group of influential theorists were to use it.

The Panopticon
During the end of the 18th century, the philosopher Jeremy Bentham travelled to Russia, where his brother Samuel was constructing a circular textile mill. The circularity was intended to enable someone to watch workers at all time, without revealing himself. Jeremy took this idea and designed the “Panopticon”: a prison in which the jailer or a guard can view all the inmates in their cells without being seen. Consequently, inmates would be watched at all times.

Panoptibook – a new media concept
Panoptibook is a new media learning tool, introducing a new way of engaging media students with theories. By placing theorists in the environment of a social media platform, it is easier to present their different theories and perspectives in a less formal manner.

Currently, Panoptibook contains eight theorists whose works play a prominent role in new media studies: Philip Agre, Wendy Chun, Gilles Deleuze, Michel Foucault, Alexander Galloway, Marshall McLuhan, Lev Manovich and Richard Stallman. The selection of these authors is in close relation to why we decided to call the platform Panoptibook. As is written in the “Frequently Asked Questions” section:

What these authors all have in common is not only an interest in new media theory, but also in the topics of ‘control’, ‘power’, and ‘surveillance’ especially. While not all of their theoretical work is directed at these themes, there is still a substantial part of it that is relevant to the field of new media and the idea of surveillance that reigns on Panoptibook.

In order for this project to work, it needs to be grounded around a central theme. This is important, as the user will then recognise a certain order and logic on the platform. By choosing the central theme of ‘control’, which all theorists are linked to, we can have them discuss that theme among each other on the platform. So the central theme of the platform is ‘control’, which is closely related to issues of ‘power’ and ‘surveillance’. Platform-specific features were used to further centralise the main theme and the issues related to it, for instance the intrusive Terms and Services and Inbox messages, with a message reading “Yesterday, your profile was viewed 3019 times. And you’ll never know by who!”. In order to fully encapsulate the central topics of control, power and surveillance, the name “Panoptibook” was chosen: an obvious reference to both the Panopticon (which is used in multiple of the theorists’ works) and Facebook.

Characteristics of Panoptibook
A pivotal aspect of this project is that the platform should resemble a social network. Certain choices had to be made in order for this resemblance to come naturally. The most obvious result is the fact that, as a visitor, the user is logged in as Michel Foucault. This was done for multiple reasons: among them, is the fact that Foucault used the Panopticon as an object to analyse and critique surveillance within societies. For a full explanation on our motivations behind choosing Foucault, see question #5 of the FAQ. Adding to the social network appearance are the (mock) functions: like, report, share, search and post. On the about page can be found how the platform identifies itself. Further contributing to the lack of privacy on Panoptibook is the website’s notion of “be open, be transparent”, as well as its “Five Commandments”. The first commandment, “[a]s a registered user, all your activity is public for all other registered users” is another reference to both the Panopticon and social networks: you need to be ‘inside the prison’ or ‘registered’ in order to be able to observe.

Challenges
The major challenge for the group was to find the right balance between humour and theory. The aim of Panoptibook was not meant to merely present fun facts on the scholars that the students deal with in the New Media Theories course. What was most important that students recognise the connection between the posts made on Panoptibook and the course content. Selecting the right quotes and posting citations was another challenge as well. As it is now, the theorists all either directly quote from their work or have posts that include the gist of their theories, albeit formulated as a less formal sentence. All references on Panoptibook are either included in the form of a link or on the bibliography page.

Reflection and future prospects
As of right now, the platform is a functional tool. This does not mean that Panoptibook should stay centralised around one topic, nor that it should keep its name. It is more about the idea that lies at the basis of it: having a mockup social platform with a format that can always be extended and developed further. Lev Manovich himself reacted to the project, by tweeting “I like it but not sure about the title“ and that he “will watch it to see how it develops”. We agree with Manovich that the name of the project is not definitive: once another group of authors or another topic is added to the platform, it would change its tone and, more so, the centrality around our topic of ‘control’. If one of the authors who is being imitated will “see how it develops”, it is not totally presumptuous to deduce that this platform has enough potential to be developed further. 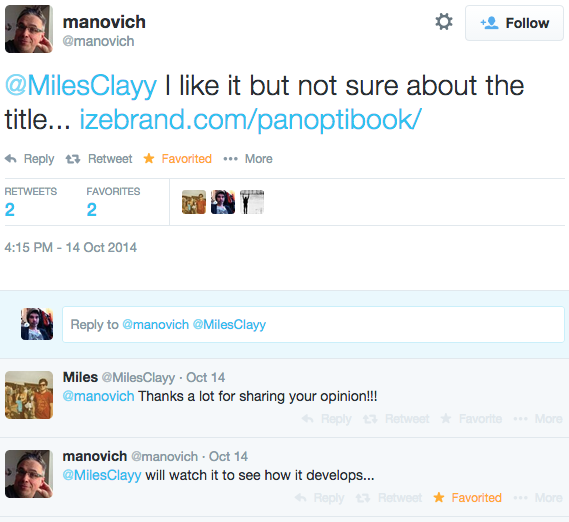