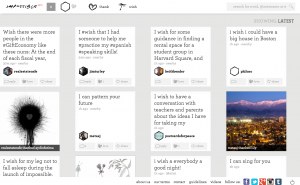 Impossible is a social network website launched in 2014. Impossible is trying to make the impossible possible by acting as a social networking hub for good deeds. In order to achieve this, Impossible provides a platform that connects people with wishes with others who can fulfill those wishes in order to encourage a culture of giving and receiving. Impossible received a lot of media covering and also support from established entrepreneurs like Tim Berners-Lee (the founder of the World Wide Web) and Jimmy Wales (the founder of Wikipedia). Its core principles are based on the concept of giving 2.0 and collaborative consumption and it is trying to develop as a self-regulatory community.

The working principle of the website is based on three main activities: “give”, “wish” and “thank”, with the reminder that the website is a money free community.

For the giving activity, users can post a message with what they can offer, ranging from objects to food, skills or just advice. The message has a limit of maximum 500 words. Users can select existing hash-tags to link to their message or create new ones. They can also enable or disable the ‘location’ button when posting the message. The location is a relevant aspect of the website, as many wishes can be fulfilled in the area of the posted message. Because the website was launched and first advertised in London, the most posts and users until now are located in London. The location is also important because it brings the interaction between people offline, as people from the same area can actually meet and exchange goods. When posting the message, users can also choose to share it on Facebook, Twitter or email.

The wishing activity acts the same as the giving activity, with users posting, hashtagging or sharing their messages on other established social network websites.

When engaging in the third activity, “thank”, users can search the person that they want to send a “thank you” in the networks Impossible, Facebook, or Twitter. Users can also send an email with a thank you card to someone outside Impossible and with this email they can invite them to join the network.

The layout of the website is made from the different posts made by users and displayed in order of their appearance. The fulfilled wishes are still appearing on the wall with a “wish fulfilled” kind of stamp above them. There is also the possibility to choose from the 10 categories or the hash-tags named ‘trending topics’, presented on the left side.

As stated above, the mission of the website is “to try and build a more collaborative economy, drive social cohesion and empower individuals“. The website also believes “in the social value offered by a stronger gift economy“.

The concept of gift economy is much older than the Internet, as it forms a foundational debate in anthropology studies. But the concept also plays an important role in discourses about the potential of the Internet. From the beginning, the Internet was seen as a platform that has the potential of global participation and grew through the free sharing of information (Barbrook, 1998, 2000, 2002). We can argue that nowadays the Internet is experiencing a stronger tendency to commercial consolidation, instead of a gift culture (Terranova, 2000).

Impossible is seeking to bring a change in the present landscape of the Internet. As an emerging social network, it is interesting to analyze Impossible from this perspective of gift economy and identify the changes that a website like this is bringing. As Barbrook argued, “at the beginning of the 21 st century, the net is now inspiring novel forms of expression which reflect its own social mores and technical protocols” (2003). The gift economy is contrasting the market economy, which is the norm for our current society. It is strongly believed that “the tribal gift economy proved that individuals could successfully live together without needing either the state or the market” and that “The ‘New Economy’ of cyberspace is an advanced form of social democracy” (Barbrook, 1998).

I argue that these claims are not yet fulfilled in the current digital culture. The everyday activity of the users such as writing emails, posting information on different platforms or creating open source software is seen as a form of gift. I argue that this free information exchange circulating on the Internet has not brought fundamental change in the ways that people are organizing their lives. In order to bring a strong alternative to the existent democratic system or the economic system based on monetary exchange and individual consumption, much more is needed than free information exchange.

As Barbrook argues, “We contribute our time and effort to the hi-tech gift economy because it is our self-interest” (2003). Giving for the sake of giving- which is a core principle of the concept of giftivism-, is a different perspective that giving for our self-interest. In a gift community, there will always be an expectation of some kind of reward, which can be tangible or intangible (Veale, 2003). The concept of giftivism– introduced by Nipun Mehta and defined as the practice of radically generous acts that change the world- is based on a ‘pay it forward’ principle, which brings ‘the other’ at the center and introduces a different way of experiencing generosity.

Impossible is trying to make a move towards this principle of giftivism and is willing to make the swift from scarcity to abundance. Although it is too early to decide to what extent this website will bring a fundamental change in the way that people interact online and offline, it is definitely bringing an attempt for a mentality swift.