“Day 1: Tim takes a dump” – taking live to the next level

In The Truman Show, Truman has no idea he is being watched 24/7, until the sun comes crushing down – literally, because the sun turned out to be a studio lamp. In Edtv, Ed knows and agrees to being watched, but underestimates the impact it has on his life. “Big brother is watching you,” are the famous words written by George Orwell in his dystopian novel 1984, setting off a fascination with watching, being watched and the medium that makes it happen. But what if not only Big Brother, but the whole world is watching you? 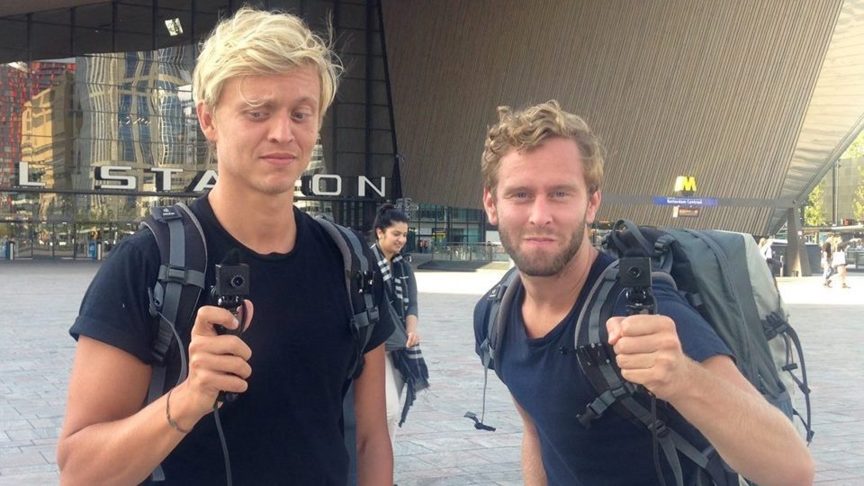 This is what Tim den Besten (28, right) en Nicolaas Veul (31, left) wanted to know as well: on August 26, their experiment Super Stream Me (SSM) started, streaming their lives 24/7 for a period of almost three weeks. Their experiment, the VPRO explains to The Volkskrant, is “a ‘psychological experiment’ in which Tim and Nicolaas investigate how social media and technological innovations influence our lives.” Their main focus of the experiment is the psychological aspect, the emotional effects it will have on them. However, I like to address the ‘social media and technological innovations’-aspect. Because: is live streaming the next big thing?

From live tv to live digi
So far all examples have been fiction. But live streaming has been around in reality as well, the word alone brings tv-associations to mind: live broadcasting of (media) events makes you feel you’re there without being there, tv shows such as Big Brother show social conflict of a carefully selected group of people, and in ‘breaking news’ coverage the liveness will add to the authenticity of the genre. More recently and moving on to the internet, there is a vast streaming culture of vlogs (video weblog), which usually aren’t live. Live streaming culture however does exist and is mainly emergent amongst gamers, successfully gathering crowds to watch them slay a dragon, and of course for sexcams. With (free) live streaming websites such as Streamify you too can start your own livestream. 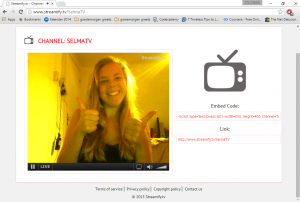 Within seconds I had set up my own live stream, called SelmaTV.

A new representation of ‘me’ – or a lack thereof?
If everyone can set up their own live stream, what distinguishes SSM from SelmaTV? Let’s illustrate by taking the highlight of day 1 as an example: Tim takes a dump.

Secondly, other live streaming services have some sort of purpose, as mentioned before. With SSM, it is the fact that it is a live stream (and – in time – the toll it takes) that makes the content interesting, not the other way. Therefore the medium outweighs the content (to quote McLuhan: “the medium is the message”): pooping is something we all do, has no real meaning and we’d usually never be keen to watch someone do; yet the medium allows over 600 people to tune in and watch Tim take a dump.

Thirdly it is the multimediality that makes this live stream particularly interesting: viewers can tweet to or about the boys, which in turn might be read by Tim and Nicolaas. Volkskrant’s Jean-Pierre Geelen: “thus arose a mirror palace of watching and being watched.” Linda Duits agrees: “fitting to our time are the ongoing meta-moments.” Take this tweet for example, where a fan tweets about watching Tim and Nicolaas, watching Jinek, which has in its turn been retweeted by Tim.

But multimediality is really taken to the next level by the inclusion of an interactive map of their whereabouts and the display of their heart rates. Besides not being able to select, direct or edit, their last bit of their representation of self is taken from them by not being able to act: nervosity or excitement cannot be hidden – giving Tim a 112 bpm heartrate while pooping. Paradoxically, it seems the more mediality is used, “the more the boundary between the online and offline world is blurred”. 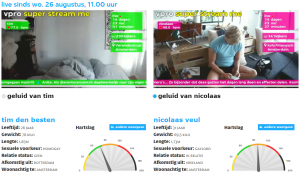 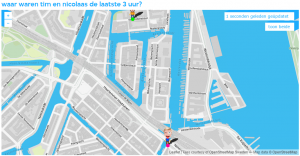 The stream also keeps track of their heartbeats and their current location.

Super Stream… You?
Past and current platforms, such as Twitter, Facebook, Instagram all show snapshots from your life, carefully selected by you. Duits mentions the same goes for vlogs: contrary to SSM, a vlog is “a careful posterior construction of everydayness. Vloggers call for interaction, but this is never realtime.” Even live streams (for both gaming or sexual purposes) have prepared their performance in one way or another, knowing how long the live stream will last and knowing what parts of their lives they will be showing and which parts they won’t. Therefore, to say we’ll soon all have a 24/7 live stream, is a far stretch – nobody wants to see you poop! But add the option to direct, edit and select your own representation, social media will be moving in this direction. And sure enough: Facebook now offers live streaming to verified celebrities and journalists.

Oh, and as far as privacy goes? As the premature discontinuation of SSM shows: yes, a lack of privacy will psychologically break you.

Nicolaas (left) and Tim, only minutes before the live stream ended.