After 20 years, The Pokémon Company announced the release of its latest project. A new mobile game called Pokémon Go, produced in collaboration with Nintendo and Niantic. The game will be available in 2016 for iOs and Android. 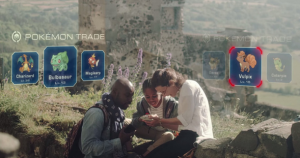 Pokémon trainers trading Pokémon with their smartphone in Pokémon Go.

For everyone who has lived under a rock for the last two decades, Pokémon is an extremely popular Japanese franchise that made its debut in the nineties. Created by Satoshi Tajiri in 1995 the game centers around fictional creatures that Pokémon trainers could catch, collect and use to battle others for sport. It started out as a game for the Nintendo Gameboy but the franchise also has a TV series and playing card game that dominated youth culture in the nineties. Now, after 20 years, Pokémon is ready to take it to the next level in digital media.

Pokémon Go is an augmented reality game in which users can physically be Pokémon trainers. In addition to the mobile application users can purchase a Bluetooth watch called the Pokémon Go Plus. The watch is linked to the app and its main function is providing a smoother gameplay by locating Pokémon that are near. The biggest hype started around the video they released with visuals of what the gameplay might look like. The video went viral within hours what shows how big the Pokémon fan base still is.

Users will be challenged to fulfill their childhood dreams to become Pokémon masters in the real world. Their smartphone or Pokémon Go Plus watch will signal them when a Pokémon is near. As a social element users can trade Pokémon with other trainers or compete in epic Pokémon battles. In short, Pokémon Go is an augmented reality version of the traditional game where users can physically be a Pokémon trainer by battling and collecting Pokémon in real life.

Looking at the world through a digital medium that makes live virtual adjustments is called augmented reality. Augmented reality is a subversion of virtual reality or virtual environments.

In context of the app the virtual additions are the Pokémon monsters that can only be seen through the digital layer of the presented media.

Virtual reality is on the rise and although augmented reality is not considered new, with new applications coming out Pokémon Go might be the most anticipating mobile game within its genre. Considering its large fanbase Pokémon Go could be the brightest example of what augmented reality could do for the game industries when it debuts in 2016.

Though the mobile application will cost potential users no money, everything comes with a price. Anna Serrano discusses the marketing aspect behind ‘free’ virtual reality environments in TEDx Talks.

Serrano portrays virtual reality as a manipulated synthetic display. It may seem as if the world around you looks the same, but when virtual reality is added something specific changes. She calls this the virtual ‘bubble’, defining it as a manufactured display of the world where users rely on its maker to send us an accurate image.
Users are not always aware that digital media collects data from their behavior. Especially in augmented reality where motion tracking and object recognition is used to collect a new kind of information is extracted from users. “What is relentlessly driving the Internet economically is the user as a consumer,” (Serrano 2014). With this judgment she seems to agree with Manuel Castells who argues that we live in an information based society (Castells 2003). Information is what shapes our world.

Serrano: “Firms that dominate the Internet today are built upon the successful manipulation of the moments of truth. They become more successful as they learn more and more about you. Sucking up data on a more gradual level,” (Serrano 2014).

More of what we do becomes part of a data transaction. Augmented reality, usually used with wearable computers like a smartwatch or the new Google Glass, produces a new kind of information. Indicators of emotional state can also be monitored and this leads to a new kind of data collection. Basically the real world becomes a trackable series of events, the analytics of the real world.

The highly anticipated mobile application Pokémon Go will set a big mark on augmented reality and the game industry. With is international appeal and large fanbase its one of the biggest augmented reality project to date. Virtual and augmented environments will soon be a definite genre in the entertainment. Presenting new ways of data collection it will manipulate users and monitor their every move.