The end of Secret, the end of anonymous social media apps?

About Laura Nusser
I'm Laura, a 21-year-old New Media and Digital Culture student at the University of Amsterdam. Earlier this year I finished my Bachelor's degree in Communication and Information sciences. I'm interested in the new media and social media scene, especially how they are used as a marketing tool.

How to stay anonymous on the web? It sounds like a trick question when the web constantly tracks your online behaviour and requires you to upload a user account on nearly every website you visit. However, the solution seems to be closer than you might think. In March 2012 the first anonymous social media app was launched, called Whisper. As the name might suggest this app is commonly used to share your deepest secrets and confessions whilst staying anonymous. 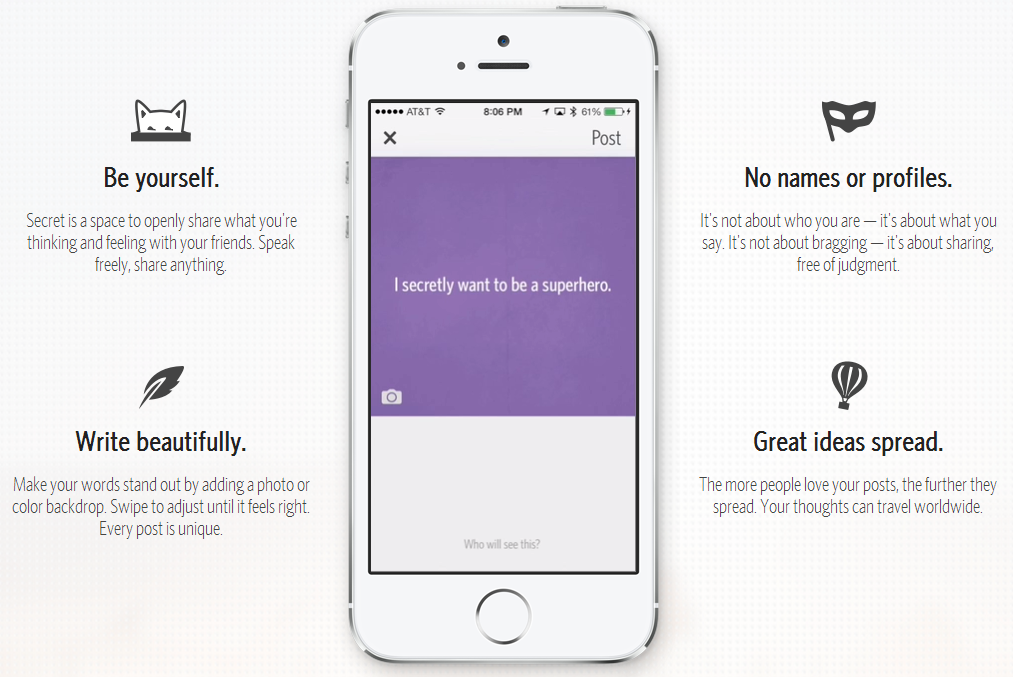 The end of Secret
Besides Whisper and Secret, Yik Yak is another leader in the anonymous social media app scene. Characteristic of anonymous social media apps is that they do not require users to upload a user account. Users can upload a post and comment on other posts while staying anonymous. The various anonymous social media apps are used for different purposes based on who their posts are shared with. Whisper and Yik Yak share users’ posts with other users based on their location. If you post a status on Yik Yak, also referred to as a ‘Yak’, it will be shared with everyone using the Yik Yak app in 1.5 km radius of you. As a result this app is commonly used among students on campus to share gossip and events (Parkinson 2015).

David Byttow, one of the founders of Secret, announced the end of the app on Twitter

Secret, however, shares the users’ posts with people from their phonebook who also have the app downloaded. This could be one of the reasons why this app was being abused. A study on anonymous social media apps has shown that if users read offensive comments directed at a member of the same social group they will experience it as more distasteful in comparison to an offensive comment directed towards a celebrity or a random person (Whittaker and Kowalski 2015, 20-21).

The future of anonymous social media apps
Nevertheless, studies have also shown that as new technology forms emerge, new forms of response to cyberbullying appear (Whittaker and Kowalksi 2015, 16). Increasingly users block and report cyberbullying which shows that there is a growing awareness of cyberbullying and how to react to it (Whittaker and Kowalksi 2015, 17; Wang, et al. 2014, 10). Therefore, I believe that with the right adjustments and policy settings anonymous apps will be here to stay. This has already been seen in the adjusted policy settings of Yik Yak, which now actively tracks down inappropriate and offensive ‘Yaks’ by filtering out certain offensive language terms (Brait 2015). Also, cyberbullying tools are actively being improved so that they can automatically track down cyberbullying based on the content, context and sentiment of the message (Whittaker and Kowalksi 2015, 21-22). Although ‘Secret’ has fallen by way side, I believe that there is still a market for people who want to anonymously share their secrets on the Internet.

Wang, Gang, et al. “Whispers in the dark: analysis of an anonymous social network.” Proceedings of the 2014 Conference on Internet Measurement Conference. ACM, 2014.