They tried to make me go to Talkspace I said, “no,no,no”.

Introducing Talkspace, the budding therapy app that claims to accommodate the ‘on demand’, ‘on the go’, ‘in the know’ culture. Therapy in the modern world. Ironically the need to be mindful has become an inevitable trend, digital therapy the oxymoron. Co-founder Roni Frank coins Talkspace, “WhatsApp with a therapist” MoneyCNN. The once start-up has built a fan base via its social networking groups on Twitter and Facebook .

To officially download the app Talkspace, is simple enough; Google Play for Android or App Store for Apple. The price tag (as a student) stopped me in my tracks.

Prior to any therapeutic discussions you meet with a Talkspace Matching Agent, in this example Dana. Dana is assigned to give a brief intro on Talkspace to potential subscribers, and then looks to directly match you with a “primary therapist”. Dana became somewhat of a confidant instantly, by texting immediately and querying on specific needs. A conversation in real time.

This is where Talkspace cuts out the middle man and becomes cost effective. Traditionally, someone seeking therapy would scour out doctors who may match needs, for hundreds of pounds, and yet not be the ideal match. Talkspace reduces costs, ($49 a week for a week, or $37 a week for a month).

Furthermore, to ensure that right match Talkspace now cognates data. Earlier in the year IBM stood side by side with start-up Talkspace to power up the text-based app, with its cognitive system IBM Watson TechCrunch. Sarah Buhr for Techcrunch revealed the joint venture with the Watson computer, to collect and produce data from texters on their “personality, thinking style and emotional stress”. Of course, there are consultation stages in between to make the final match, but ultimately cognitive computing technologies seem the way forward. Buhr goes on  to say, Watson’s Personality Insights API (the computer that paves your path) “breaks down and analyses text generated by users” TechCrunch. With these texting conversations, Watson correlates cognitive data to generate a match and potentially “offer insights into a course therapy” TechCrunch. For an app, no longer a start-up but with a $9.5m backing by Spark Capital, this could change the face (no pun intended) of therapy.

Most will find it strange, the idea of a computer deciding treatment for you. The inevitability  of a computer now determining our brain therapy is noted in Ray Kurzweil,”The Singularity is Near”. Kurzweil compares the rate of progress of the biological evolution of intelligence to that of technological evolution, “consider that the most advanced mammals have added about one cubic inch of brain matter every hundred thousand years, whereas we are roughly doubling the computational capacity of computers every year”(16). This rate of advancement can only foreshadow the likes  of Talkspace using cognitive analysis of texts, a successful future course of human development.

Watson is only the beginning.

If Watson can whittle down who, what and which therapy is best for a texter alone, for over 150,000 current Talkspace users it could  instantaneously bring comfort New Scientist. This leaves Freud alone, on his couch.

Is our conversation private?

Talkspace works in sync with your mobile or laptop. Convenience is of order, this being one of the Talkspaces’ main trading points, mentioned in the video above and on the Talkspace FAQ page. 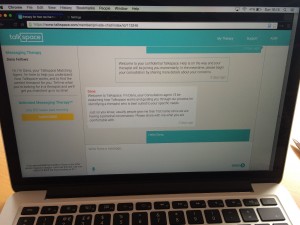 The Talkspace team denotes the necessity for  “access to professional advice whenever and wherever we need it”. Dana and I conversed mostly on the web  during the matching stage, but the app, well it goes wherever you go. At  numerous points she drummed in Talkspaces privacy stance, even when at ease. “Your safety is our #1 priority”; the no1 point on their privacy FAQ.

Conversations between Dana and I were stored  even at the initial stages of matching, the point where Watson correlates information.

Questions of privacy arise as where does all this big data really end up? Sure in the Terms & Conditions, team Talkspace reiterate privacy is guaranteed by the team abiding by the HIPAA compliance. Nevertheless, with the accumulation of thousands, potentially millions of personal information, Schönberger and Cukier preclude “a change of scale leads to a change of state”(151). Talkspace users provide stigma-free-hopeful-information, yet Watsons’ collection of discussions are filtered somewhere, but where? There are a range of internet-age threatened privacy issues, but there is always a possibility that Talkspaces’ conversations with its clients lead to “penalties based on propensities”(151). The latter point Roni Frank, co-founder, pertains against when striving to  “democratize psychotherapy,”Mashable.

Back to therapy, once you pass level one with Dana, you move on to the point of interaction with your data albeit licensed, therapist.

Face time is becoming less of a necessity. It seems audio notes such as Danas’ one to me, which felt like a  conversation with a friend, are the front runners.  Talkspace has questions in the extremely personal data correlated, but its growth in app users’  answers them.

Cognitive computing is  advancing daily, Talkspace has entered an ecology, where Watson is the future for digital therapy.

For Freud the couch can remain, if only for him to sleep on.

Kurzweil, Ray. The Singularity Is Near: When Humans Transcend Biology. New York: Penguin, 2005. 16.

Mayer-Schönberger, Viktor, and Kenneth Cukier. Big Data: A Revolution That Will Transform How We Live, Work, and Think. Houghton Mifflin Harcourt, 2013. 115.