Why Instagram finally lets us think outside of the box

About Milan van Vugt
Hi! I'm Milan, an exited New Media student who is still figuring out what she finds the most interesting in this new, lively and broad field of research and studies.

Ever since it’s rise to fame, Instagram has been known for its square pictures. But with a recent new update the platform finally lets its users break free from that restriction. To make “telling our visual story easier and more fun than ever” (Instagram HQ 2015), we can now all share – big drumroll – landscape and portrait sized pics on the photo sharing app; something almost 20% of their users already did via other apps (Instagram HQ 2015). Instagram made it very clear that they implemented this major change for the more than 300 million users of the app. They even stated that they know how difficult it was to always make the square-sized image work: “… friends get cut out from group shots, the subject of your video feels cramped, and you can’t capture the Golden Gate bridge from end to end” (Instagram HQ 2015). When reading the Instagram blog post about this update you almost feel like you have to drop down on your bare knees and thank Instagram for being so kind-hearted and good to us.

But do we really? Because everyone who takes the time to read what other media have to say about this update soon realizes that the users might not be the ones Instagram is trying to please. Even when thinking about it just now you can probably name a few stakeholders for whom the different sized pictures and videos are an advantage (or a clear disadvantage): Instagram has advertisers to convince, competition to defeat, other platforms to coincide with and it has to stay up-to-date with the latest trends in online sharing, which in this case means that it must support video content in the best way possible. 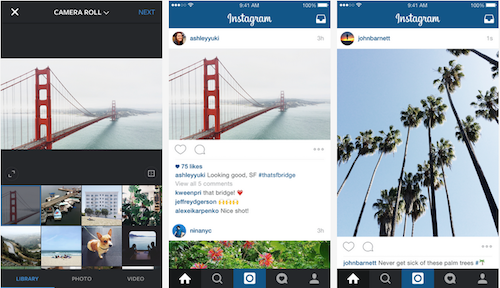 Before we explore al these different stakeholders Instagram has to please, let us take a closer look at the update itself. From now on, when uploading a photo on Instagram, you’ll find a format button above the camera roll (as seen in the above picture). Here you can select a setting: square, landscape or portrait, but the default modus will remain the iconic square. In your friends’ feeds your pictures will appear in the selected shape, but to keep your profile grid looking organized, there your odd sized photos will appear as centre-cropped squares.

For all the amateur photographers using the app this update sounds super fun and like it will make your life a whole lot better. From now on you don’t have to use apps like Instasize, Square Sized en Squaready to make your pic’s Instagram ready, as Setalvad from The Verge (2015), points out. Is this a courtesy to us or is it Instagrams declaration of war to all those third-party apps? The same question can be asked about why this update is more supportive of video content. In their update announcement Instagram writes: “We’re especially excited about what this update means for videos on Instagram, which in widescreen can be more cinematic than ever” (Instagram HQ 2015). Is this truly an update with their users in mind or is this a desperate way of stopping us to become heavy users of rivalling app Snapchat, on which landscape videos are increasingly popular (Lowry 2015, Kulp 2015)? In the video below Instagram very vividly shows us what this update can mean for video content on the platform:

With al these questions in mind, there is an even bigger one looming. As Kulp (2015) stresses, this new update hands advertisers basically a free pass to upload whatever content they want on the platform. Previously brands and other advertisers had to adapt to Instagrams unavoidable square format, but now all the promotional material created for campaigns via other media are usable on Instagram. And brands are already taking full advantage of that. Mountain Dew and Ortega Taco, among others, didn’t hesitate to use Instagrams new options to promote their products. So can we assume that the photo-sharing app parted with its recognizable square to earn money, via the new advertisement opportunities? Maybe it’s not the only reason for this Instagram update, but ignoring how much easier advertising on Instagram has become would be foolish. We can learn that from these words of Justin Renzani, the CEO of theAmplify, an ad-agency specialized in Instagram marketing: “It definitely increases flexibility, you get the full realization of what the image is providing – the full story the photographer wanted to tell.” (qtd. in Kulp 2015). 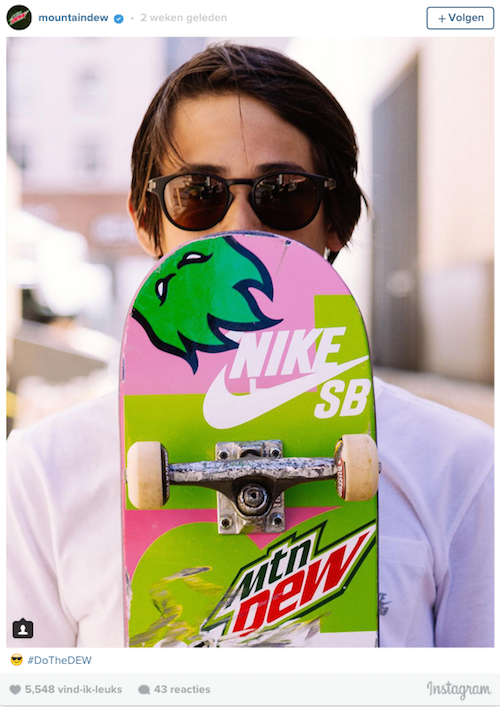 Although we may not like that Instagrams clean looking feed is now in the past, we can also not act surprised. For a few months now, the app has been making changes to make the platform more attractive and useful for advertisers: in June they introduced us to new types of ads and in August they launched a new API, attractive for both bigger and smaller brands to work with (Kulp 2015). Gillespie (2012) described balancing the needs and wishes of advertisers and users very accurately: “The business of being a cultural intermediary is a complex and fragile one, oriented as it is to at least three constituencies: end users, advertisers and professional content producers. (…) Intermediaries like YouTube must present themselves strategically to each of these audiences, carve out a role and a set of expectations that is acceptable to each and also serves their own financial interests, while resolving or at least eliding the contradictions between them.” (Gillespie 2012, 353). If Instagram knows how to give advertisers more freedom without provoking (and eventually losing) their users, they’re probably in for a good ride, since research firm eMarketer claims that with the new updates Instagram could surpass Twitter and Google as an ad platform by 2017 (qtd. in Kulp 2015). 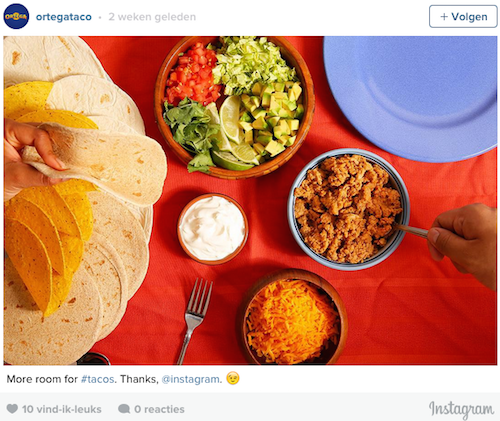