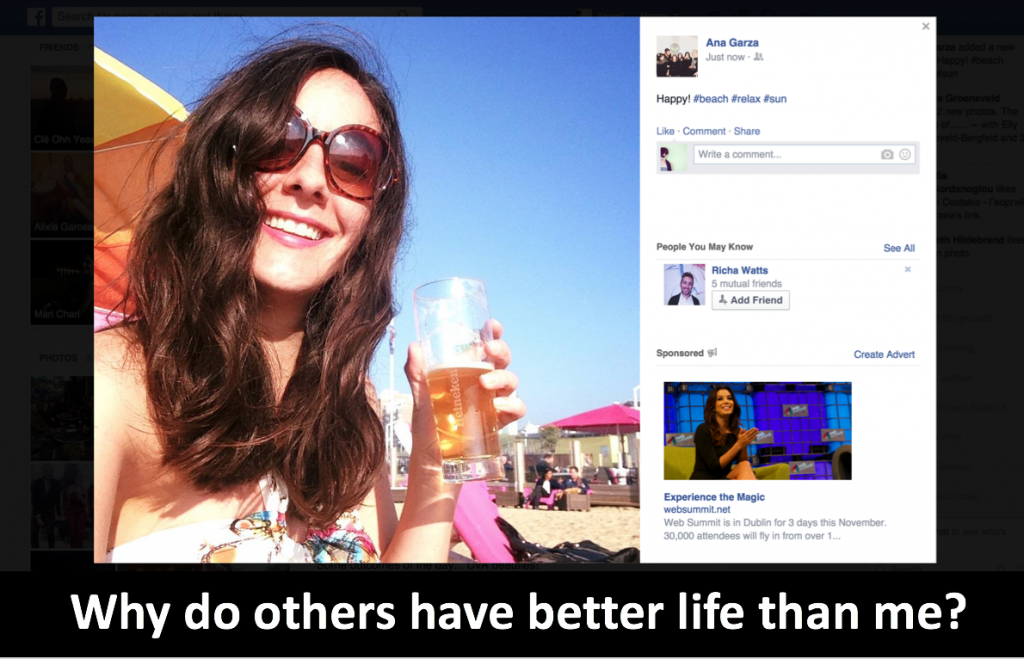 We might all have felt this way at some point– scrolling through endless posts and photographs of people who seem like they are living “The Life”: getting that promotion they have dreamed of, marrying the most perfect person in the world, eating a super special Nutella – Donut – Chocolate Fudge – Brownie Explosion – Sundae by the beach in sunny Phuket.

Why can’t I have all those nice things!? Why does my life suck so bad?

Surely there is a reason, we reasoned. So we looked up studies that would explain the link between mindlessly scrolling through your Facebook newsfeed and ending up feeling really low about where you are at in life. Researchers have found that feelings such as these arise when users compare their own life and accomplishments to those of their Facebook friends. This might occur, for example, when looking at photos of friends’ life accomplishments and making social comparisons (Steers, Wickham and Acitelli 2014, 703-6; Blease 2015, 2).  In particular, a recent study found that envy about “travel and leisure”, “social interactions” and “happiness” belong to the three most frequently mentioned causes of envy triggered by Facebook use. (Krasnova 2013, 6). 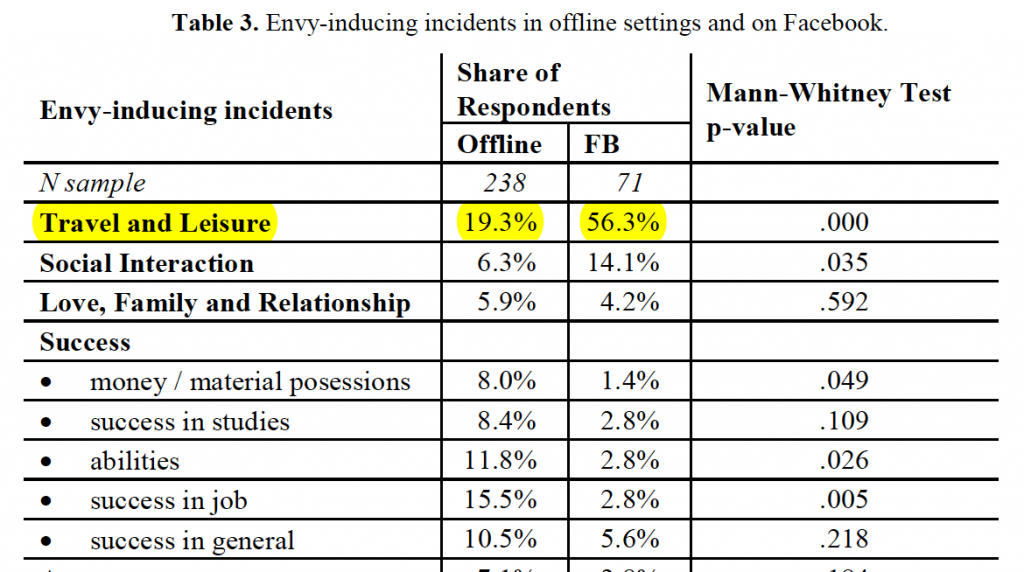 How have people tried to battle this big green monster then? Krasnova et al. (2013, 7-11) studied a group of college students on how they tackle envy (2013), and suggested ways in which the target student could deal with this: 1) avoid adding friends one feels particularly envious about or 2) unfriending these people. These strategies, however, are unlikely to be popular among users, since they contradict social norms present on SNS and can lead to social tension (Krasnova 2013, 23).Further, as part of their envy-coping plan, some users may engage in even greater self-promotion and impression management. After all, overstatement of personal accomplishment is a common reaction to envy feelings (Krasnova 2013, 44). The most straightforward way to cope with envy can be to hide posts from friends one feels particularly envious about or to partly or even fully refrain from passive following on Social Networking System (SNS). 5) The last options is to partly (or even fully) refrain following SNS. The last option we thought was the least nuclear and most healthy of them all, we reasoned. And thus was conceived The Logout Project.

Our project suggests users to take a break from browsing their newsfeed and taking up activities that give to users joy. Given the fact that “it is not the social medium itself that is to blame for depression but the feelings that it might trigger, particularly Facebook envy, something that cannot be sweepingly expected of all Facebook users.” (Edson, Ferrucci and Duffy 2015, 144), this project recommends not to deactivate or delete your Facebook account but rather that you logout temporarily. Our aim is to identify potential triggers for envy from a user’s exposure to their peer’s personal achievements on Facebook, make users aware of such incidents and instead suggest alternative actions to browsing Facebook.

We figured that we had first have to create awareness among users  about envy being the link between Facebook use and “depression”. And what better way to reach our target audience than to make a page on Facebook they could follow! 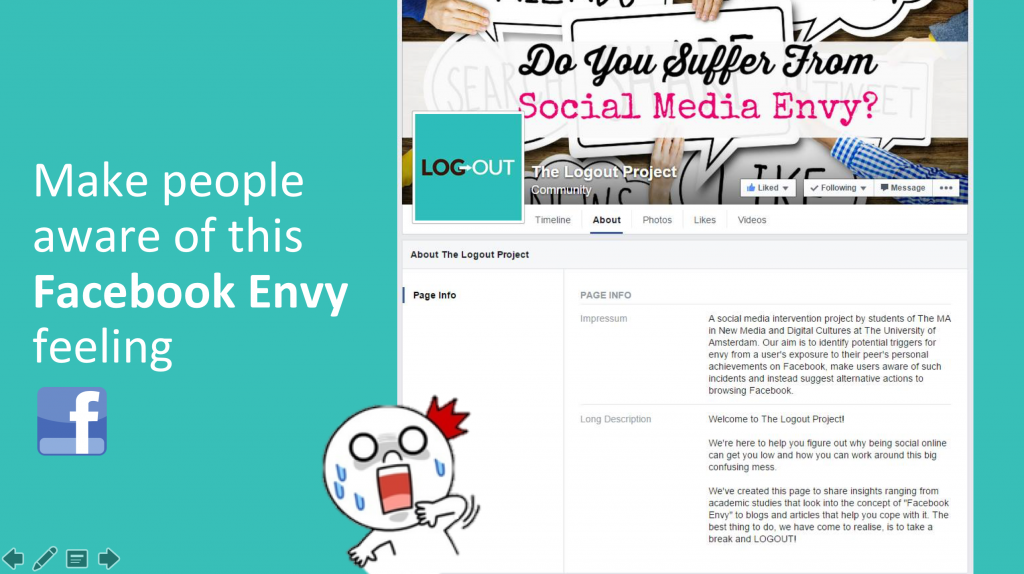 The next step was to intervene deeper into the user’s Facebook activity. To accomplish this, we thought of creating a browser plug-in for Google Chrome, and made mock-ups (with LINE Stickers as example) to show what it looks like. The objective of this plug-in would be to identify content that may trigger envious feelings and suggest alternative actions to browsing Facebook. Here’s how it would work: 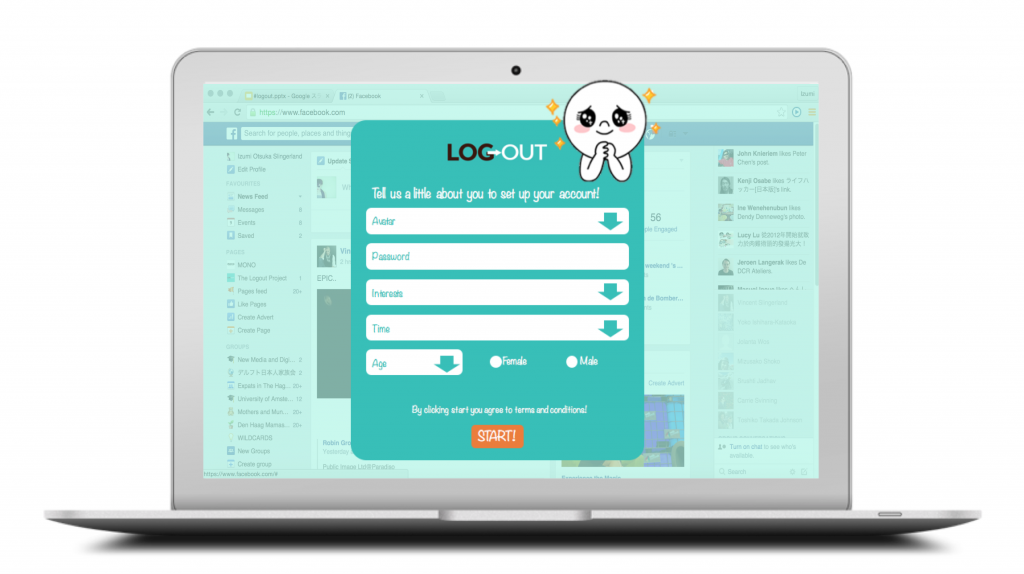 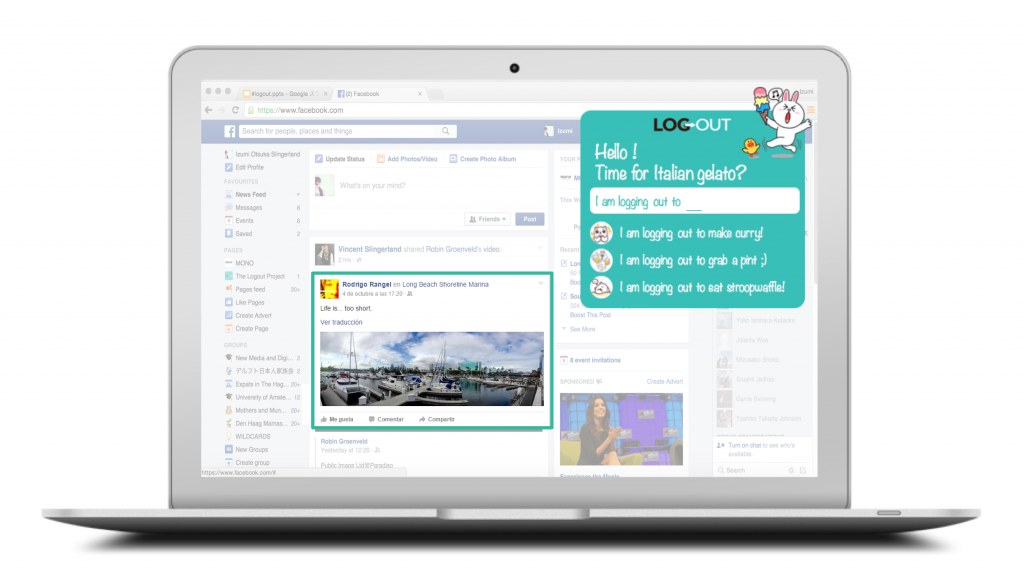 Any user can create his/her profile by choosing an avatar, age, gender and selecting activities he/she is  interested in from categories in a drop-down menu. The purpose of creating anonymous avatars is to reduce the pressure of doing what the user’s peers are doing. Once the user has logged in, the plug-in will activate while the user browses Facebook in two ways. Firstly, it will be activated after the user has been exposed to ten photographs belonging to the categories of leisure and travel. Secondly, based on the finding by  by Edson, Ferrucci and Duffy (2015, 141-2) that Heavy Facebook users tend to feel higher levels of Facebook envy, the user will have the option to set-up a time range she/he wants the plug-in to activate. The plug-in would function with a content based filtering algorithm and location based technology in order to show accurate and attractive suggestions to users.

The interface would also allow the user to post what she/he is “logging out to (do)” (a maximum of 30 characters- text or emoji). Giving the user the option to participate and see other user’s post would help motivate him/her to stop scrolling on Facebook and do the activity they have posted. The plug-in will show up to three posts from anonymous users, refreshing every 20 seconds that are related to the interest category in the suggestion box.

We made a parody video based on the story of KFC commercial, explaining how the plug-in would work and shared it online to gauge people’s reactions to such an intervention. We wanted to show how shared pictures on Facebook weren’t all that rosy, because people tend to share exclusively the fun stuff and this is usually just a part of their reality. The video reflected stereotypical envy-inducing images people posted on Facebook users and how our plug-in would help.

What we learnt and future of this project

A major question for this project would be to figure out how to make the suggestions attractive enough to intervene in a user’s Facebook experience. It would be important that the suggestions be easy and realistic enough to change a user’s mind and push him/her to take action immediately. We would need more in-depth research so as to create a suggestions-database and link its learning to the inputs from user’s “I am logging out to…” posts.

Although this project deals with Facebook envy at just the surface, we believe that it can be used to inspire further studies on the concept of envy on social networking sites and may help solve problems of social comparison and peer pressure.

The findings by Krasnova et al. (2013) signal that users frequently perceive Facebook as a stressful environment, which may, in the long-run, endanger platform sustainability. To make the world biggest social networking platform survive, and keep the users out of possible depression, our suggestion plug-in could act as an initiative to create awareness and point out the possibilities for Facebook to change their interface so as to not actively encourage social comparison.