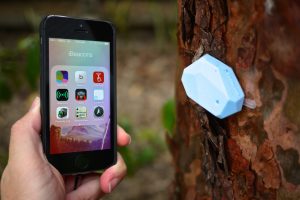 As European Capital of Innovation, Amsterdam is experimenting with a range of technologies which turn the city into a so-called “smart city”. With the beacon gadgets installed all over the city, more interaction with the public is made possible. Moreover, they also offer a collection of data open to everyone. But what does this really entail? What about the balance between privacy of the citizen and the social and economic ambitions of the city?

Amsterdam’s amount of population and visitors keeps growing every year. This confronts the city with a lot of challenges related to capacity, organisation and efficiency. “City governments need to rethink the ways in which they interact with large companies in offering services to their citizens as well as how they communicate with those citizens” argue Walravens and Ballon (72). In order to find an answer to an increasing demand to more and better infrastructure, Amsterdam Smart City (ASC) leads several projects that are experimenting with new technology that could on one hand provide more information on what’s going on out there, but on the other to provide guiding information to visitors and inhabitants, but also to help economic growth of the city’s companies.

The IoT Living Lab of Amsterdam is working on a new project with beacons, small devices enabling capturing of the exact localisation of people in the area of the equipment through Bluetooth signals, whereas smartphone localisation still remains vague and inaccurate. Today we can find around 300 beacons in Amsterdam. At the moment the beacons are mainly spread around museums and public transportation infrastructure, at bus, tram or metro stops and in the transports themselves. There are two types of beacons: iBeacons – provided by Apple – and Eddystones – provided by Google. The platform which collects and shares the data is administered by Google.

Beacons aren’t such a new technology but the concept of the Amsterdam Open Beacon Network developed by ASC and his Living Lab is a pioneering project. They are storing real time data related to movements of people in the city. This collection of data is available to anyone, but the city especially targets application developers to use them to create apps that improve the liveability of the city and value on the culture and experiencing of it. An example of an application that already has been developed for this, is inBeacon, a platform that manages beacons for bigger companies such as Coca-Cola or Event Planner. The company is also looking for solutions for problems like queuing for instance, by using the beacons to know how many people are localised around a certain selling spot.

The concept of “smart city” remains vague according to literature, it points at the new challenges cities are confronted with, but it also provides new means to tackle those challenges, where the technological aspect of this concept is part of the operationalization of it (Walravens & Ballon, 72). Within the discussions about the influence of smart cities on society, both technological deterministic voices and socio-constructivist ones constitute the debate. For the former, the network is seen as a sort of architecture that enables control over all activities in the cities and to interfere in, for the latter, it is seen as a way for citizens to play a role in the innovation process, which can be stimulated by the state (idem, 72).

The Amsterdam Open Beacon Network is part of an open-source data initiative meant to develop a partnership between companies, authorities, researchers and citizens, and to create a sensitive city. “Open data” is standardized electronic information that is free to use and available to anyone, which may lead to concerns about privacy and transparency because the European legislative framework still remains unclear (Jaatinen, 28). Another identified issue is that it reinforces digital divides within the population (Walravens & Ballon, 73).

Information on citizens (or consumers) nowadays has a lot of value and taking advantage of it can bring economic growth and effectiveness to the city, but governments shouldn’t underestimate the importance of protecting personal data against cyberattacks and consumers against aggressive marketing. How can we find a balance between enhancing privacy – a human right – and to develop citizen’s welfare (Floridi, 1)? Also, there is a lot of stakeholders involved within the Amsterdam Smart City project – companies, politicians, public institutions – and thus, it becomes important to find a balance between their concerns and to put citizen’s interests primary. The question remains how smart cities can stay citizen-centred and friendly.

Neighbor, Joseph. “The Internet of Things Is Making Our Cities Smarter and More Efficient” Motherboard, 25 April 2016. Accessed on 10 Sept. 2016 <http://motherboard.vice.com/blog/the-internet-of-things-is-making-our-cities-smarter-and-more-efficient>