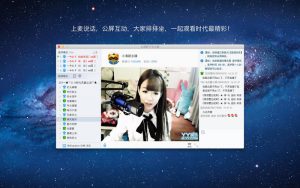 Live- streaming has been many tech- enthusiasts’ dreams, and it was once a struggle to make this peer-to-peer, one-to- many online interactions come true. However, YY, starting as a live- gaming application, has recently reached a billion registered users and has recently accommodated more than 200,000 online users to join the “STORM” music festival, Beijing stop.

What does YY do?

Similar to companies such as Meerkat, Periscope, Youtube Live, and Facebook Live, YY enables users to podcast live videos, while allows the rest to comment and interact with the video hosts. However, what makes YY and many Chinese live-streaming apps different than the Western apps is that YY allows the viewers to send “virtual gifts”, which have direct equivalent to RMB, to show their support of the live programs. In the fourth quarter of 2015, virtual gifts had contributed in about 1.5 billion RMB (approx. 200 million Euro) for YY (Xiang). Many popular YY users have taken live video podcasting as their full-time jobs, earning more than a million RBM a year.

When analysing the success of YY, I’d like to begin with quoting the Funder of Twitter in his speech at XOXO Festival, 2013:

“The internet makes human desires more easily attainable. In other words, it offers convenience. Convenience on the internet is basically achieved by two things: speed, and cognitive ease.” (Williams)

Evidently, YY has built an efficient platform that satisfies the first element: speed that allows real-time interaction between users. Furthermore, it invites both video hosts and viewers to experience the sense of cognitive ease. To be specific, video host will experience the feeling of certainty when receiving supports, such as virtual gifts and the increasing number of followers. While at the same time, viewers feel safe being in the chat room with like-minded people who share the same interests and opinions, enjoying the shows of the hosts they like.

Research has also found that comparing to previous communication mediums, real-time communication drives the liking of others and creates the sense of virtual co-presence. Eventually, live streaming video and social interaction combined will create and maintain the kind of ties between users with which traditional media cannot compare. (Weisz, et al)

Another interesting approach to analyse its success is the company’s use of on- demand economy. Similar concepts had been applied before- Uber who owns no car, Airbnb who owns no apartment, Deliveroo who owns no restaurant … etc. YY in this case, provides thousands of videos every day but produces and owns no content. In comparisons to traditional media like TV and newspapers, YY doesn’t need to spend its budget on creating content. In contrast, channel hosts will pay YY an amount of money with the videos they broadcast, depending on how much they earn from the virtual gifts.

CEO of YY, David Li had not only spotted the trend in new media, but has the technical team to make this vision happen. His platform has attracted people from various interest- based groups to fund and root their own society online, and to bond the strongest relationship internet ever allows them to. Eventually, whether the groups will stay to prosper in this application or move to the next new thing, is depending on this company’s ability to adapt and evolve with users’ increasing demands.

Fast growing as this live-streaming model, many issues have been developed, including inappropriate content and copyright disputes. Some similar apps have been taken down for the above reasons. Yet, in my opinion, the difficult debate here is whether live- streaming encourages vulgar content, and whether a third- party should be involved to regulate.

A recent Chinese report has shown that 80% of the live-streaming videos are entertainment oriented. Including videos broadcasting good-looking hosts and peeking into one’s everyday lives (eg. shopping, cooking… etc). Most followers have paid just to feel involved in the hosts’ lives. (叶) Moreover, the same report has shown that 77.1% of the internet users believe live-streaming video platforms consist of vulgar content. 74.8% of the users support the Ministry of Culture to reinforce content regulation.

It is not hard to understand why some people want to be involved with others’ lives. And this platform may be nudging this behavior with the provided functions. I agree on applying necessary protocols to regulate illegal content. Yet in terms of further regulation, it will be too difficult to define what “vulgar content” is, and to intentionally shift the online environment. Instead of being passive about this development, I’d like to invite readers to look at the development of this technology in a different way. It is true some users may stay interested and continue contributing incentives for others to create the mentioned “vulgar” content. But like with any other trendy apps in the past, most people’s interest will fade away. We have to concede that this technology has opened an entirely new chapter in new media, and its potential, to be developed for medical purposes for one, will contribute greatly to advancing our lives. And the function of sending “virtual gift”or other available incentives, if properly used, can take a crucial role to encourage optimized content/activities to be delivered. 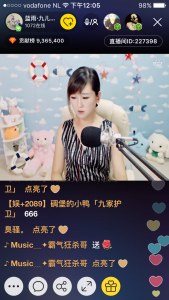