Yik Yak is a fairly recently launched social media app for both iOS and Android users, introduced in 2013. This app, developed by Tyler Droll and Brooks Buffington allows users to share their thoughts with people in the nearby area. According to PCAdvisor: “Yik Yak allows you to share your 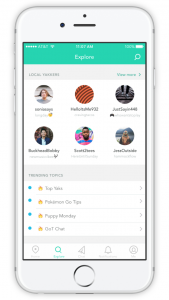 thoughts with people nearby, making it a hugely popular app among students and campuses. Posts can get upvoted if they’re interesting, so you’ll see the posts that others have considered to be good at the top of your feed.”(Allsop, PCAdvisor 2016) Which ultimately means that Yik Yak is a more local, essentially anonymous—if you choose, version of Twitter. This app allows you to share your thoughts with people in the area, while also remaining identity-less—you can choose whatever username you’d like and remain photo-less while “yak-ing” your thoughts with nearby yakkers.

In order to get involved, TechCrunch explains, “users can contribute to the content by writing, responding and up- or down-voting “yaks.” The app targets college campuses as their go-to source for news and gossip.” (Tech Crunch, 2013) Hence, this is where the controversy comes in for whether this app is emerging as a relevant new media object in a positive or negative sense.

Since the platform allows for complete anonymity, this rises the ability for gossip, free speech, controversial discussions and thought sharing, etc. According to the popular tech site, MakeUsOf, “college administrations across America have tried to ban the app without much success (though it is completely blocked at middle and high schools)” (Pot. Ten Things You Need To Know About Yik Yak, 2015) because it is looked down upon as a “meet and greet” social media platform to enhance thoughts and friendships within your perimeter.

Because Yik Yak has combined a ton of various elements of other popular and widely used social media platforms such as Facebook, Instragram, Twitter and Snapchat—there is no doubt that competition has quickly risen. An alternate app with similar purpose called “Spayce” has created a similar but different version of Yik Yak, lacking the anonymity factor. Spayce’s founder and CEO, Patrick Colangelo, a 22 year-old college student who created the app from his dorm room says that the app “is 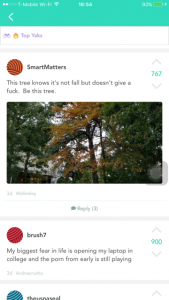 Example of an Amsterdam feed on my phone

about bringing people closer together, while also tapping into human’s innate curiosity about what’s happening in the world around them.” (Pickavet. Tech Crunch, 2014)

“It’s human nature to want to know what’s happening [in a given location], and what’s happened there in the past,” he claims. “And that will govern whether you stay, or if you choose to leave.”” The app’s sole difference from Yik Yak is that there is a an actual online presence and identity of the user, which strikes as a less dangerous and obviously more personal touch.

TechCrunch also points out a very relevant aspect of these types of up and coming geographical location-based apps: “If those sorts of concerns – finding tonight’s cool hotspot or hangout, that is –  strike you as something that seem a bit more relevant to the 20-something college student, that’s because they are. But over time, the app’s user base could grow to include real-time feeds that attract a wider audience.” (Constine. Tech Crunch, 2016) Everything we utilize lately, each app on our phone, each search we submit—usually all prompt us for our location for the most accuracy and clear results. So apps like Yik Yak and Spayce may just be the new relevant and emergent ways to communicate with others and also befriend locals in the next few years.

The general idea behind the emergent world of location-based apps and media objects is that it eliminates the factor of privacy, in a sense—while also allowing you to connect with people in your general perimeter, by your decision of course. Essentially, you are trading your privacy and 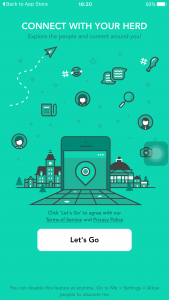 giving up your location for communication—when put bluntly. An article on TechCrunch addresses this concept in regards to Yik Yak by explaining that these apps are developed for “sharing moments not gossip”. Author Sarah Perez compares and contrasts Yik Yak and Spayce and concludes: “The idea that the world needs a “Twitter for locations,” so to speak, is one that’s been tried for years on end but had yet to take off, at least until Yik Yak came around. But even that app’s popularity is largely due to its salacious, gossipy content and users’ ability to hide their identities. The pull of anonymity has helped Yik Yak grow quickly, but possibly, unsustainably.” (Perez. Tech Crunch, 2015)

Although location-based everything is becoming our go-to method for communicating, forming friendships, as well as keep in touch with people, it also adds for many issues concerning these emerging apps. You are able to communicate by location, but without identity. Yik Yak has received much pushback in regards to this aspect due to many parents angrily blaming the app for online bullying, as well as CNET discussing death threats being intitiated due to the fact that people inherit a sense of power when remaining identity-less. Watch both segments here and here.

So ultimately, the question of whether or not the world of location based apps is

cal meet-ups,  shifting to a more emerging and communicative media sphere that encourages loinformation sharing, communication, business thriving, and more, rather than a world of local gossip and threats being made behind a glass screen. Which way will this new media unravel?