Super Apps – The Western World is Already Behind


In the Western part of the world we usually believe we are ahead of the times and that we have a “one up” on the rest of the world when it comes to the best new technologies and apps. But maybe we underestimate our fellow competitors far too much? For example, China has the ultimate social media platform, and the likes of Facebook Messenger, Whatsapp, and Twitter are just now trying to catch up. Not only catch up, but our apps look completely inferior next to the Chinese competitor, WeChat.

WeChat – What is it? 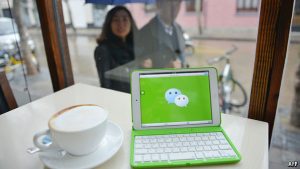 Many people may still live under a rock when it comes to talking about this app called WeChat, which is also known as Weixin. So lets break it down and give it some back-story. WeChat was an innovation created 5 years ago by a company called Tencent. Tencent is a Chinese online-gaming and social-media firm and with over 700 million people using it, it has become the largest communication app out there (Forbes and Economist 2016). A typical user will use it 10 times or more in a single day (Economist 2016). For example, when McLuhan talked about hot and cool culture in relation to media it was something to be noted. Hot media such as WeChat is being widely used already (remember, 700 million users) and it has been accepted by a high literacy world (McLuhan 31). If for example, this “hot” medium were used in a “cool” culture, then the users of WeChat would not have been as responsive to this type of app.

WeChat is the ultimate super app at this moment because it is a mobile messaging board, which offers free video calls, group chat, and many fun features such as a shake function to link other users, as well as almost creating a “cashless economy.” The other surprising fact is that over half of its users have linked their bank account information to the mobile payment system and now virtually do everything from this one app alone. Users can shop, book a hotel, pay a bill and order a meal, all while talking to their friends. In the West, we are striving for a “cashless economy,” but the Chinese are already living it.

WeChat and Silicon Valley: You Have Their Attention

The success of WeChat has grown so much that it has grabbed the attention of those at Silicon Valley. Although, WeChat is not necessarily emerging at this point anymore, we on the Western end of the world have yet to catch up. Facebook has been monitoring WeChat closely, and even inspired the billion-dollar acquisition of Whatsapp back in 2014 (Forbes 2016). WeChat offers such a large variety of features that their users do not have to look to other apps to fulfill their online needs. WeChat has advertising, digital content, e-commerce and finance; while Facebook Messenger offers none of these and Whatsapp has only just started using finance. In the first quarter of 2016, WeChat generated $1.8 billion in mobile revenue, compared to a $49 million from Whatsapp and even more embarrassingly, almost nothing at all for Facebook Messenger (Forbes 2016). So as you can imagine, Facebook wants their piece of the pie. David Marcus, VP of Facebook Messenger, has openly called WeChat “inspiring” and has plans of transforming the app into a platform where people can buy things as well as communicate. Western consumers are used to using many different apps to take care of the same kind of business that WeChat, essentially does in a single central hub (Economist 2016). But the thing is, WeChat is so huge because as we all know the Chinese government has blocked foreign social media platforms such as Facebook and Twitter. Whatsapp is WeChat’s closest rival because it is free to operate on Mainland China. This super app has thrived because it solves problems for its users and offers them new and exciting things. Simply put, WeChat is changing the mobile Internet for everyone – especially those outside of China, because the Western firms are doing everything they can to contend with their success (Economist 2016).

Have you heard of “Rooms” yet? Probably not. It could be Facebook Messengers emerging new group chat feature that gives users the ability to create a “room” about any topic or event that the user is interested in (Venture Beat 2016). Rooms will be for public conversations and anyone on Messenger can join in.   If Facebook is rolling out this new chat feature, then it could be one step closer to the likes of WeChat. The evolution of Messenger has already begun, with the feature of making payments using bots being added just this past week (Looper & Shah 2016.) Messenger is starting to sound like WeChat doesn’t it? This is only the beginning since there is still a lot more movement in consumer mobile messaging to come. Chatbots and bots are receiving a lot of focus at the moment, but that is just a part of the significantly larger picture. Eventually we will have chatbots (inflowanalysis.com, 2016) that will be able to communicate within a mobile messaging platform that will be providing useful services to their users. It is the way of the future, and it seems the Western part of the world is slightly behind, but not for long it seems!