The Rise of the Emoji’s. Final goal: World Domination. 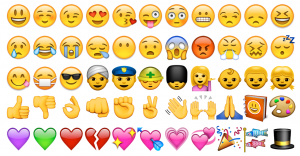 It seems almost impossible, a life without these creative, colourful and sometimes confusing characters. There is no easier way of texting – even for those who aren’t used to modern smartphones – and it seems like there is an appropriate emoji for every possible situation. We not only think in emoji’s, but we act and even flirt in terms of them. Now a days, we don’t have time for complete sentences or complicated thinking; we just want to communicate easily with whomever we want. Emoji’s are easy, international and fast, so they fit the modern world. But, is this extension good news?

Emoji’s: now and then

To be completely honest, there is nothing new about the use of emoji’s. It all started in the 19th century when Scott Fahlman, a computer scientist at Carnegie Mellon University, wrote the first emoji with a certain purpose. This was just the beginning of something what has become bigger and bigger. Christina Bonnington wrote about what she called the ‘emoji fever’ already in 2013. They popped up in Japan in the ’90 because of their efficiency. When they reached the Western culture short after that, the so called ‘emoji fever’ exploded (Wired). In that case, why writing this article while it is supposed to be about a new media object? Well, new about emoji’s is the fact that they are going to reach their highest goal this year: to become the universal world-language.

as its ‘word’ of the year. Casper Grathwohl, President of Oxford Dictionaries, states about this increasing impact of emoji’s:

“You can see how traditional alphabet scripts have been struggling to meet the rapid-fire, visually focused demands of 21st Century communication.  It’s not surprising that a pictographic script like emoji has stepped in to fill those gaps—it’s flexible, immediate, and infuses tone beautifully. As a result emoji are becoming an increasingly rich form of communication, one that transcends linguistic borders” (Oxford Dictionaries).

Satoe Haile, an emoji designer at Google adds: “emoji’s communicate beyond language, transcending tongues and borders” (Parkin). Even politicians use emoji’s in their speeches or interviews. And as icing on the cake, there is also the possibility to create your own emoji (for example via the free app Makemoji) or use the ones of the many celebrities who came up with their own emoji-app (for example Kimoji from Kim Kardashian). With more than 1800 emoji’s, which are estimated to be used by more than 90% of the world’s online population, emoji’s are taking over the alphabet (Parkin). It seems like emoji’s are the ultimate extension of the man, and we can’t without them.

Emoji’s: the dark side

Although it seems like there is nothing but praise for these funny and useful characters, there is also another side of the whole story. Last year, Jonathan Jones of The Guardian described them as “brainless little icons” and stated that we are evolving backwards (Jones). Vyv Evans, a linguistics professor at Bangor University, insists emoji’s will never replace the traditional alphabet, but she also thinks it’s believable that emoji’s will increasingly be used to complement digital versions of written words (Caddy). There are a lot of people who argue that this means deterioration of our language and that it needs to stop before we are getting addicted to these characters. Well, it seems like it’s already too late and we have reached the final phase of the extensions of the man.

In 1964, Marshall McLuhan wrote about the importance of media as the focus of study. According to him, media is ‘any extension’ of ourselves or by any new technology (McLuhan 9). He stated that the medium itself also affected society and not only because of its content (5). The content of any medium is always another medium. In this light, we can look at emoji’s as an extension of ourselves. They help us communicate and express ourselves. But, it also raises the question if it’s any good. As McLuhan describes, the final phase of the extensions of man means: “technological simulation of consciousness, when the creative process of knowing will be collectively and corporately extended to the whole human society, much as we have already extended our senses and our nerves by the various media” (5).

If emoji’s are reaching their highest goal, world domination, this year, it means that they also reached the final phase of the extensions of man. And personally, when I think about this scenario, I get a