Remediate The Clock: The Shift from Time to Space

Despite its name, the Eta Clock isn’t really a clock. Well, it is shaped like a traditional clock- a rectangular piece of wood that nowadays we can probably just see in old movies- and uses clock hands as pointers, exactly how a traditional analogic device would do. But instead of pointing time, it points locations. Specifically, every color-coded hand represents a different person and the twelve segments of the clock are carved with places, instead of hours. 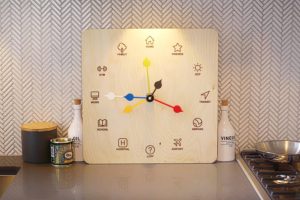 The idea came out two years ago from the mind of Kristie and Eric D’Ambrosio-Correll: “For my parent’s 35th wedding anniversary we decided the perfect gift would be a device that gives them peace-of-mind; something that keeps them connected to their adult children without requiring invasive tracking”. A device built for the use and consumption of family and friends, a constant reassurance that our thoughts about other members activities are well placed.

The way in which the device works is pretty simple to understand, and at the same time innovative. Different smartphones, each of them representing a different clock hand, transmit their geolocation to Eta’s server. The server will then relays the information to the Eta Clock. When the abovementioned receives new coordinates, it immediately changes the position of clock hands in order to show the new geolocation of the friend/partner/relative. Of course, the “humans” representing the clock hands will need to download an app and then add specific locations in order to allow the app to recognize where they are. Adding a new location will help Eta’s server to send a faster input to the clock.

The main idea underneath the project is that, in order to create a “human-centric device”-that’s how the two creators define their creation on Kickstarter.com- the emphasis should be focused on location instead of time. In order to do so, it is recommended to make use of a metaphor, that is, in this case, the clock. Indeed new technologies need to confront themselves with the uses and habits of everyday life, meaning also the objects that people are used to see and to recognize. All that is necessary for new media in order to weave “into the warp and weft of everyday urban life, so that they become increasingly normalized, taken-for-granted, and thus culturally less visible” (Crange, 2410). The clock isn’t a genuine precondition in order to make this technology works – the smartphone Eta app would have done the same job in a less expensive and bulky way – but it is a good way to nudge social groups to internalize this new social practice. Well, it also has nice aesthetics.

Well, someone actually did. I don’t know if you are a Harry Potter’s fan. I’m not. If you are, there are many chances you’ve already noticed some similarities between the “Eta Clock” and the “Weasley clock”, a nine-hands old-fashioned clock owned by the Wesley family that points the whereabouts of the nine Wesleys. The main difference is that the J.K.Rowling’s one doesn’t work by geolocation and Bluetooth. Instead, it is fueled by magic. Of course.

Several years passed before someone actually tried to build its true and earthly device. Specifically, 7 years from the publishing of “Harry Potter and the Goblet of Fire”, a team of researchers composed by Barry Brown, Alex Taylor, Shahram Izadi, Abigail Sellen and Joseph “Jofish” Kaye made a simpler version of the same kind of device. The “Whereabouts Clock”, better known as “WAC”, is a device:

“intended to be situated in the home in the form of a clock that allows family members to see where other members of the family are in four broad categories (“home”, “work”, “school” and “elsewhere”). Family members are tracked using cell phones”. (Brown, 2)

Does that ring a bell? If it wasn’t for the number of places and for more basic technologies, the “WAC” and the “Eta Clock” would be almost the same thing. The “WAC” was built for the main purpose of a research trial. The research team aimed to know how five different families would have reacted to the introduction of this new technology. Mainly the aim was to find out if it is possible for a small group of people, on average five, to internalize those new practices of incessant location-sharing over a period of six months. The answer to this question was, overall, positive. That’s good news for Kristie and her husband and project co-founder Eric D’Ambrosio-Correll. But there are other variables to consider for this project to be successful.

The launch of the Eta Clock, announced to be next July, will definitely raise many curiosities. But it’ll raise a lot of doubts as well.

The first issue deriving from this type of device is strictly linked with concernings about surveillance and privacy. Will the Eta Clock be the next frontier of location-related retrieving of data? Will Kristie and Eric D’Ambrosio-Correll and their company use those data in order to gain money by exploiting family members’ movements? The answer to both questions is, fortunately, no. As it is explained in the Kickstarter’s page of the project, the only possessor of the generated data will be the Eta clock’s owner. In fact “each Eta Clock has its own data storage, which means as soon as we pass along each user’s geolocation updates, we remove it from our system, making you the only owner of that data” (Dormehl, “Digitaltrends”). That’s good news for everyone concerned about the registration of their movements. But the Eta’s device presents other problems.

It was established that, in the intentions of the two co-founders, the Eta Clock is intended for familiar use. But looking more closely to the new features imported by this device, someone could claim that Eta clock is going to represent a natural overcoming of the “Active Badge system”. Implemented for the first time in 1992, the Active Badge was a “black plastic rectangle…that uses infrared light to indicate its location to devices mounted on walls and ceilings, which in turn are connected to a database” (Agre, 740). Its use was limited to the workplace, where employees movements were constantly under control. 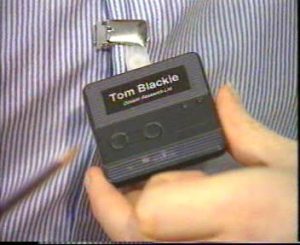 Not to say that every office boss will spend its working hours looking at the wall until a clock-hand shifts in the wrong direction, but obviously a technology like Eta’s one will not go unnoticed by who is in charge of optimizing how the time is spent in a workplace. It is no surprise that the D’Ambrosio-Correll duo “have had requests from large and small companies alike asking for a version that displays where their key employees are located by time zone or office”. If you think that’s a problem or not, it’s political.

What D’Ambrosio-Correll partners seem to not have considered enough is the enjoyment of personal independence. It’s something intrinsic to human nature and every tech-gadget whatsoever needs to get to grips with it.

Actually, their smartphone app gives everyone the chance to switch their privacy setting to a less intrusive mode. As they declared: “If your friend prefers not to be tracked everywhere, they can simply make certain locations off-limits”. And you are free again…just like that. Or not?

We’ve talked before about the similarities between this device and the “WAC”. Yes, the latter was projected ten years ago, but many families seemed to be satisfied with the 6 months trial setting. One of them was so delighted by the device that revealed: “We are going to miss it” (Brown, 7). The Whereabouts clock allowed “a virtual sense of everybody together”, a boosted feeling of closeness. But what the research team didn’t consider was the chance to turn off their phones or, better, to switch the privacy mode to a lesser trackable modality. That is- and not just the number of locations or the precision of geolocation due to improving technologies- the main difference between the WAC and the Eta Clock. That’s one of the reasons why we can’t really say if the Eta clock is going to be a success. D’Ambrosio-Correll have tried to allow everyone to enjoy his or her independence from time to time. But the truth is that the Eta Clock, and more specifically the technology which it carries, is designed to be completely ubiquitous. The privacy mode would be considered by the other members as an exception, not as a rule.

The Eta Clock is neither a tech-savvies gadget nor a dystopic idea. The Eta Clock is the predictable last step -for now- of a system of ideas that underlines the development of technology-linked devices and see the connection between humans and technology as ubiquitous and constant. If it’s going to be a success or not, it’s hard to tell. We will need to wait until July 2018. Let’s just say that the Eta’s campaign just reached its goal of 30’000 on Kickstarter.com, and probably the number will grow in the next months.

If it really will be a success, it’s likely that the private independence of family members and friends which make use of this technology will be questioned. The simple act of switching the smartphone app’s mode from observable to private is, in fact, meaningful. And the independence cannot be re-acquired with a snap of fingers.