“What’s mine is yours”; sharing a wardrobe with strangers online with The Nu Wardrobe

Subletting a living space on Airbnb, sharing a car as mode of transportation with Blablacar or borrowing a stranger’s power drill for a couple of hours using Peerby has become a well-established and often used practice in 2017. Enter websites and apps allowing you to rent out dress for an evening or a coat for a season and even your wardrobe turns into a playground for sharing and swapping belongings with strangers via online platforms.

After its initial offline launch in 2015 by two Irish graduate students, The Nu Wardrobe launched its online platform on September 18th, inviting its members to “Look good. Save money. Reduce waste” (The Nu Wardrobe 2017). Through the borrowing of fellow members’ clothes, shoes and accessories for only a couple of euros per item, Nu encourages eco-friendliness on the base of reducing demand for new goods (Frenken and Schor 7) by sharing previously owned items, as well as inviting its users to save money by not paying full price for a new piece of clothing. Now that Nu’s online presence is fortified through the new platform, members can partake in the borrowing process from the comfort of their home, browsing through a collective online wardrobe without having to physically attend “swap shops.”

Even though Böcker and Meelen state that sharing products with others rather than privately owning them has been a growing trend recently (29), the idea of sharing commodities as novelty is a common misconception. However, whereas sharing has been historically practiced in the past within communities for the most part (Frenken and Schor 4), new media platforms allow for so called “stranger sharing” (Frenken and Schor 4) as websites and smartphone applications facilitate communication and accessibility to a temporary access to a stranger’s commodities. With the emerging practices of “sharing, exchanging or rental of goods and services to others through IT” (Taeihagh 192) the term “sharing economy” was introduced. According to Martin, the sharing economy is first and foremost driven by digital technologies as they enable more efficient utilisation of resources (152), as well as allowing the skipping of formation or maintenance of social relationships, something borrowing practices are typically dependent on otherwise (Jenkins, Molesworth and Scullion 134).

So how does the launch of their online platform play into Nu’s previously established offline presence?

To co-founder Aisling Byrne (Byrne 2017), the new online platform of Nu represents an essential step in growing a small community and making a greater impact despite the Nu team’s small size. By launching an online platform allowing people to sign up and start borrowing or lending clothing online, the element of having to physically attend previously organised “swap shops” is replaced with the ability to scroll through a feed of clothes on offer on a computer or smartphone, narrowing down the search based on style, size or colour. On top of that, the website’s scalability (Byrne 2017) facilitates the changing or adding of elements, such as adding new locations people can sign up from to take part in the borrowing or lending process.

While borrowing clothes online as a concept in itself is not necessarily new, with platforms like StyleLend offering its members to borrow expensive designer pieces from others for a small amount of the piece’s original price, Nu’s approach to monetary reward is entirely different. Be that as it may, sites like StyleLend, dubbed “Airbnb for clothes” (Hartmans 2017), advertise their services as making “glamorous fashion accessible to all” whilst also encouraging its members to “make extra cash” (StyleLend 2017), ultimately using economic motivations (Böcker and Meelen 29) as a selling point.

Nu, on the other hand, steps away from the idea of creating “micro entrepreneurs,” by encouraging the sharing of commodities with strangers online on a basis of economic profit (Martin 153), instead inviting its members to “look good and feel good with a positive impact” (The Nu Wardrobe 2017), drawing on the rewarding feeling resulting from saving money whilst reducing over consumption.

Even though the cost of borrowing an item varies from two to five euros, depending on whether or not members decide to purchase discount vouchers in advance (twenty euros for ten transactions), the money spent by the borrower does not go to the lender. Instead, the money spent by members is invested in the upkeep of the platform. The site’s FAQ underlines this, claiming that

“This service charge goes directly to Nu. Users do not make money off the platform, instead, we are fostering a sharing community where everyone can pay a small flat fee and thus access to fashion becomes cheaper for all” (The Nu Wardrobe 2017).

With new collections coming out up to 15 times a year at popular high street brands like Zara, Gap or Adidas (Tan 2016), fast fashion has long been established as an important driver of environmental impacts (Roos et. al in Zamani, Sandin and Peters 1368). Due to increasingly more fashion collections dropping over the course of each year, a common concern with fast fashion is that of consumers discarding garments before the end of their technical lifespan (Zamani, Sandin and Peters 1374). The premature discarding of clothing in turn produces more waste, a problem Nu tries to counteract by inviting its users to reuse already purchased clothes in an attempt to extend the clothes’ life-cycle (The Nu Wardrobe 2017).

In an attempt to further raise awareness about the dark sides of fast fashion and to share tips and tricks on how to change one’s consumption practices for the better, Nu provides its members with content on their blog with article titles ranging from “Why share, not shop?” to “How asking ‘why’ before you buy can change everything” (The Nu Blog 2017).

The sharing economy is often regarded as an “innovation with sustainability benefits” as it encourages “increased efficiency in the use of goods (Böcker and Meelen 29). Hence, online sharing platforms frequently advertise themselves as “green” and particularly as carbon-footprint reducing on the basis that it is assumed to reduce the demand for new goods (Frenken and Schor 7) by reusing previously owned ones.

However, most studies done on sustainability as a trait of the sharing economy focus is mainly on car sharing platforms like Uber or Blablacar, leaving clothes sharing as a field with the opportunity to be analysed and studied further. Previous studies may have looked at sustainability impacts of so called “clothing libraries” (Zamani, Sandin and Peters) but not so much at clothes sharing through online platforms. How big of an impact Nu will have on shopping habits is still to be found out… 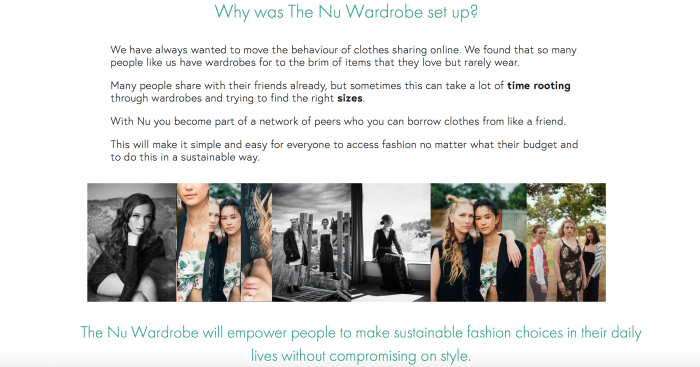 Would you trust a stranger with your clothes?

The sharing economy allows you to save money and potentially lead a more environmentally friendly lifestyle but how likely are we to trust a stranger online with our belongings?

Even though electronic market platforms “create mechanisms for trust and reputation in anonymous markets,” particularly through the use of rating and review options (Puschman and Alt 93), Nu has been building a strong “offline” community since its first events in 2015 by organising so-called “swap shops,” with Byrne (2017) commenting on community being “the very basis of Nu.”

New media thus becomes a tool to facilitate information circulation and the reaching of a wider audience for Nu, moving from a smaller, previously established offline community to a bigger online presence. Still in its beta trial at the moment, the online platform will be introducing rating and feedback options in the near future (Byrne 2017), as the goal is to create a review system that will “further build trust among the Nu community” (The Nu Wardrobe 2017).

Nonetheless, no matter how trustworthy someone on the internet may seem, lending a coat or a pair of shoes to a stranger online can still be a very intimate experience (Frenken and Schor 4), with fears about damage or loss of the lent item arising. In an attempt to purvey a sense of security, Nu members offering temporary access to their belonging to other are insured to a degree that the borrowing user has to agree to the platform’s terms and conditions, asking users to treat other’s pieces respectfully and clean each piece before returning it. In the event of damage or loss of an item, the lender is entitled to a (by them) prefixed amount of money from the borrower (The Nu Wardrobe 2017).

Whether or not someone decides to use platforms like Nu to share clothes with strangers with the benefit of being able to borrow pieces from others in return is still a very personal decision, but may be more enticing with set rules and conditions put in place by the platform.

What’s next for Nu?

Even if the new Nu platform allows for better communication and an easier, potentially safer borrowing process, spreading the word online about how the platform works and what it tries to accomplish, the project’s success is not entirely reliant on its online presence. With plans to expand outside of Ireland, starting with Oxford and Bristol before Christmas 2017 (Byrne 2017), Nu offers unpaid positions as brand ambassadors who will essentially be trained to spread the word about Nu online as well as offline by organising events.

By making this an unpaid position (The Nu Wardrobe 2017), Nu once again creates a strong narrative around the idea of building a community which then functions as a safe space within which its members can share one big collective wardrobe. Being a somewhat non-profit online platform in regard to members potentially saving, but not earning money, Nu introduces a new way of thinking about sharing commodities. Compared to already existing platforms like Airbnb or StyleLend, Nu promote social and environmental motivations rather than monetary ones (Böcker and Meleen 29).

Hartmans, Avery. I tried a startup that lets you borrow clothes from someone else’s closet. Here’s what I found. Business Insider, 11 July 2016. http://www.businessinsider.com/review-of-clothing-rental-site-style-lend-2016-7?international=true&r=US&IR=T#the-first-thing-i-noticed-about-style-lend-is-that-the-selection-is-different-from-similar-clothing-rental-sites-1). Accessed 24 September 2017.