Before going on holiday you probably ask a friend or family member for advice on the best cafe’s, museums or hikes to visit on your trip. Lonely Planet, as the number one guidebook publisher in the world, are also a primary source for many travelers (Ingraham). Whether reading a physical copy or perusing their website, the company has provided travelers with globetrotting knowledge for over forty years. With their newest app Trips, Lonely Planet hopes to “unite a community of travelers” through shared user-generated travel experience (Swant).

Released at the start of August, Trips is similar to Instagram in its interface and interactivity, undoubtedly to allow users immediate navigation ease for those familiar with the latter app. Once signed in, Trips provides users with the ability to add content about their travels, ‘Discover’ other trips that users have undertaken, as well as accessing their own profile; displaying their ‘Followers’, their own trips and previously ‘Liked posts’, along with access to their Notifications page that shows them who has followed them:

“We don’t expect people to abandon other photo-sharing apps (…) We even built functionality in Trips so you can link back to your Instagram and show those photos. But this is a more in-depth product from a travel point of view.” CEO Daniel Houghton

Yet, Trips is more than an online image-sharing application. Trips chaperones users into creating their very own travel guide, where photos accompanied by text and maps, allow for intricate detail of one’s adventures to help others to follow (literally) in the user’s footsteps. The app wants to be a collaborative space, specific to those who travel, inspired by their pre-existing forum (Thorn Tree) of “crowdsourced” content (Ingraham). However, there is another side to user-generated content apps, that moves away from the utopian idea of a free, open, sharing space. Before exploring Trip’s in regard to the potential exploitation of the users of the app, a look into the concept of Web 2.0 and its “participatory web cultures”, needs to be understood as Trips is a move by the company into the dynamic and interactive world of apps (Beer & Burrows 10).

Trips is part of the Web 2.0, a term that describes the way in which web pages are created and used. These websites (and apps) incorporate “smooth interfaces” that allow for “instant information”, due to their internet connection as well as being a technology that caters to high-speed, open-source format, and the ability to share and interact with other users (Gehl 2). In Richard Barbrook’s definition of the “gift economy” he explores how these modern webpages allow for collaboration without restriction by distance and without monetary gains:

“Unrestricted by physical distance, they collaborate with each other without the direct mediation of money and politics. Unconcerned about copyright, they give and receive information without thought of payment. In the absence of states or markets to mediate social bonds, network communities are instead formed through the mutual obligations created by gifts of time and ideas.” (Terranova 36)

Similarly, George Ritzer and Nathan Jurgenson believe that Web 2.0 is “defined by the ability of users to produce content collaboratively”, and Lonely Planet has created an online space where this is possible with the sharing of tips, locations and images (19). Although “collectively […] and user-generated content” was offered during the more static Web 1.0, shown by the Lonely Planet’s 1996 forum Thorn Tree, the structure of Web 2.0 focuses on creating “social connections” between users through easy participation and collaboration (Coté & Pybus 89; Leung 1328).

Work for us… for free

As idyllic as Web 2.0 sounds it is still part of an economy, a digital economy where there are profits from user-generated content and engagement. Terranova sees a crucial aspect of this economy, whereby there is a “role of continuous, creative, innovative labour as the ground of market value” (47). Lonely Planet’s second app is the company’s official foray into user collaboration on smartphones. In his own words Houghton describes that: “Guides is more of a tool, whereas Trips is geared for sharing content.” (Buhr). Where their first app (Guides) was more of a digitization of their popular guidebooks, that did not allow for interactivity and sharing between users. Trips on the other hand relies solely on user contributions, instead of hired writers. Rather than paying professionals to create content it is passed to the consumer to also become the producer, for free.  As Ritzer and Junrgenson state: “consumers do these formerly paid tasks for no recompense”, yet without the unpaid production of content by users, the app is inoperable (26).

A way of looking at the idea of the free labour of the consumer as producer, can be seen in Putting Consumers to Work. Zwick et al. explored Ritzer’s 1993 concept of McDonaldization,  where there is an “appropriation of customer work” (166). The rationale of the term for example sees turning the customer – in a fast food restaurant – into the waiter who waits, picks up and then takes their food to their table. This can be applied to Trips as the user, who goes traveling, takes the photos, writes up their experience and even maps out their journey, takes the place of the professional employee previously hired by Lonely Planet. 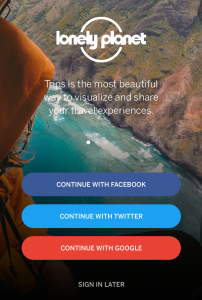 So how does an app like Trips create revenue for Lonely Planet? Houghton describes the app as a platform with travelers and community in mind, as if the app was created just for the users benefit: “If you do share your creations publicly, it all gets exposed to the rest of the community and hopefully encourages you to share more […] There’s a lot to be said for being in a community of people specific to travel” (Ingraham 2017). However, this utopian sense of community is not accurate, there is also the exchange of money, but not between the user who creates the content, but through Lonely Planet and third-party platforms. This is revealed as soon as the app is purchased and an attempt is made to sign-up, where one must register by using their  Google, Twitter or Facebook account, and once selected, the next page for registering shows how the user’s private information can be accessed by Lonely Planet. 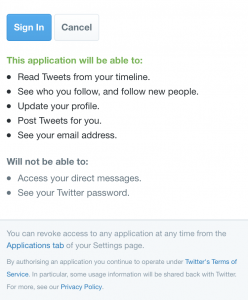 The in-app page that appears after signing up with Twitter on Trips.

It could be argued that the so-called exploitation of user’s labour is more abstruse in Web 2.0: “On the one hand, organizations […] ‘own’ the major resources on Web 2.0 […]. Users are the producers, but the profit, or at least the potential for profit, still belongs to corporations “(Ritzer and Jurgenson 2010:26). For example, Lonely Planet do not own the right to the content created by users, however under ‘Your Content’ in their End User Licence Agreement they state, they have the right to “use Your Content for promotional and marketing purpose.” Highlighting one benefit that Lonely Planet gains from providing a free app to share content. Although Terranova notes that free labour “is not necessarily exploited labour”, it is clear to see that not only are users fully producing the content used on the app, but the product created can be used by the company for gains, as well as third-party platform data retrieval shown above in their signing-up methods (47).

One question for Trips, that relies completely on user-generated content, is if the app will thrive and keep being relevant for user engagement? If Lonely Planet’s pre-existing Thorn Tree forum has kept active then potentially the answer is yes, people want to produce and consume their own creations.

So, what keeps users motivated in continuously producing content, when they are not being directly paid back for their time and effort? This question is explored in both Ritzer and Jurgenson’s and Leung’s articles, where both studies believe “gaining recognition” through the number of followers and likes a user can gain indulges them, along with the empowerment of creating one’s own content that is acknowledged by others (Ritzer & Jurgenson 25). In addition, the app allows for users to include their professional websites and Instagram accounts, producing potential job opportunities or further collaborations in the future. Yet, there seems to be a simple answer to the question above, gratification: “it is probably more likely that prosumers really do like doing these things and they are not simply being manipulated into such feelings by the capitalist”, individuals simply enjoy creating and posting what they have produced (Ritzer & Jurgenson 2010: 25).

Besides, although Terranova’s ‘free labour’ is an interesting concept of relevance, the problem with the term labour, when understood through the work of Arividsson and Colleoni, is that labour “can be understood as manifestations of exploitation” which connotes to domination, a type of forcing of users to “undertake the activity” (137).  Perhaps too strong of a word for users posting pictures, blogging and including maps on Trips? They are not forced into the task, maybe manipulated by the company with words of ‘community’ (which the app has the potential to create) and ‘sharing’, yet there are many apps like Trips and it is up to the user to decide which one they contribute (work) for.

A not so lonely planet, if you use our app

Not all activity done on social media sites are acts of labour, messages between friends on Facebook, sending a Tweet out to your followers, and leaving a comment on a YouTube video may all be activities captured by the website. However, on a site like Trips, the whole premise of the app relies on users to produce textual and visual content, keeping the app “alive through labour”, which were previously done by professionals hired by Lonely Planet to create their guidebooks (Terranova 48). Yet, it can also be seen that Lonely Planet’s early forum already catered to a community and users interacting and sharing their travelling advice. Thus, it could be argued that Lonely Planet has extended the service from forum to app, while including a smooth interface, easy to use tutorial step by steps on creating one’s own guide, and a platform that allows for it to be all in one place at the touch of a button. As mentioned earlier, it seems users like to produce and consume, creating your own content to be shared has it benefits, especially when this can be shared with a community of like-minded individuals. Nevertheless, this does not mean to say that an aspect of exploitation through signing up and handing over personal data, to content being used for marketing, is not undertaken. Just like so many other sites and apps who rely solely on user-generated, for businesses digital content needs to produce profit.

Leung, Louis. “User-generated content on the internet: an examination of gratifications, civic engagement and psychological empowerment”. New media and society. 11.8 (2009): 1327–1347

Ritzer, George, and Nathan Jurgenson. “Production, Consumption, Prosumption The Nature of Capitalism in the Age of the Digital ‘prosumer.’” Journal of Consumer Culture 10.1 (2010): 13–36.