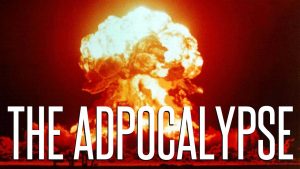 The ‘Adpocalypse’, as it has been declared by worlds most popular YouTuber, Pewdiepie, is without any doubt the biggest struggle YouTube itself and all of its creators had tot deal with in 2017. It started of with a boycott by advertisers and was followed up by YouTube having to quickly reshape their algorithm, trying to add the ability to recognize ‘advertisement unfriendly videos’. The (maybe too) quick surfacing of this reinvented algorithm, resulted in a situation that was accompanied with many hick-ups that caused an enormous amount unfairly demonetized videos, leaving many creators in anger and confusion for months and often causing their income to drop drastically in comparison to the pre-adpocalypse period (Sloane). The fact that Google lacked in informing their creators, who are the beating heart that is keeping the platform alive, about the monetization algorithm, is almost just as interesting as it’s always changing recommendation algorithm that nowadays pushes commercial and quick video content, possibly leaving artsy and more intellectual content behind. Is the algorithm slowly taking over by preferring filling Google’s pockets over spreading quality content?

It all started with an advertising boycott by multiple huge brands including Pepsico and Wal-Mart. This boycott was caused by the fact that they figured that their advertisements where beings shown on YouTube content that was far from suitable for this. This content included hate speech, racism and even jihad related content (Nicas). After the Wall Street Journal posted an article on the topic, many other brands followed and YouTube was forced to do something about it, and started with reinventing their algorithm and applying it to all the content before even finishing it, scanning not only the 300 hours of content that are being uploaded a day, but as well all existing content that already was being monitised.

(image showing the drop in a creator’s revenue)

What about the creators?

This resulted in many videos being de-monetized, without clear explanation towards the creators who posted theses and to which the the revenue out of this monetization is their income. On the surface the green dollar sign, shown within video manager, was still bright green, meaning everything should be fine regarding to the monetization of a video, but in fact none to only a little bit of revenue was being made, targeting not only advertisement unfriendly videos, but as well advertisement friendly videos that were being flagged unfairly.

The updated algorithm was not ready yet, it was way to strict and still had to learn, but the pressure of the media forced Google to put it out there, leaving many YouTubers in anger. This resulted in a rage of videos about the topic by many of the largest YouTubers, including Casey Neistat and Pewdiepie. Their anger was not only caused by the fact that they made less money of their videos, but it was mostly the vague- to non communication from YouTube’s side.

September 2017, about four months after the boycott and adpocalypse had been started, YouTube finally came with an update regarding the demonetization of so many videos. They cleared things up by posting an article and a video explaining the situation (YouTube). They finally found a transparent solution, allowing creators to see if their video had been monetized by turning the green dollar sign yellow and enabling them to get a real person at YouTube to manually check it when the system got it wrong. No statement was made by YouTube regarding all the income that creators had missed over the past months, leaving many creators still frustrated and some even with the intention of starting a lawsuit.

The rise of the algorithm as a commercial beast

These series of events could raise the discussion on the individual vs a giant multinational like Google. Even though the ‘You’ in YouTube stands for the individuals who keep the website alive, Google was clearly putting its energy in keeping the advertisers happy, leaving the creators deserted in confusion and anger. One could state that the fast changing recommendation algorithm that pushes commercial content filled with advertisements, often leaving the more artsy and meaningful content behind, underlines this notion of prioritising commercial succes, although the future of the platform could have been uncertain without the moves YouTube made over the past six months.