The New Media art partnership between Cary Peppermint and Leila Christine Nadir entitled ecoarttech aims to repurpose the use of common technologies (e.g. smartphones) with the intent of bringing global communities closer together, as well as local communities closer to, and more aware of, their natural surroundings. Through this objective, notions concerning network collectivity, the collective’s (possible) role in the authorship of media-based artworks, environmental awareness, and our current understandings of the spatial and temporal, are all brought to the forefront, asking to be re-assessed and re-examined.

Leonardo On-Line: Art, Science and the Environment describes the collaboration ecoarttech as one that, “explores environmental issues and convergent media and technologies from an interdisciplinary perspective, including art, digital studies, philosophy, literature, and eco-criticism.” Throughout the years, this dynamic duo of technological-artists has often shown the tendency to weave several of their artworks together, on a long-term basis. One prime example of this is the ‘web’ is of the three artworks entitled Indeterminate Hikes+ (2012), Wilderness Collider (2012), and Basecamp.exe (2013/4). The conceptual basis of these three works is grounded in the contemporary, human tendency to forget the ecological connections with our own local environments.

Indeterminate Hikes+, or IH+, is a mobile media app intended to “re-appropriate smartphones, which are generally used for rapid communication and consumerism,” and turn them into “tools of alternative mappings, environmental imagination, and meditative wonder.” (Nadir + Peppermint). Through the use of Google Maps technology, IH+ sends the app user on a guided, local hike, as well as tracks it. This wild expedition can be experienced in one of two ways: as a self-guided tour by the smartphone-equipped hiker or, instead, as a “participatory public event led by the artists, potentially alongside [the] Basecamp.exe installation.” (Nadir + Peppermint) In either case, hikers are encouraged to share their inner thoughts and reactions with regards to their immediate surroundings via tweet, text, or through the sharing of photographs.

The Basecamp.exe installation begins with a set of re-purposed, wooden chairs constructed out of recycled shipping palettes, “which reference natural and industrial histories.” The installation is then further “comprised of digital, natural, and industrial materials,” such as “campfires, computers, tents, rocks, salvaged wood, urban debris, [and] a #wilderness twitter feed,” (Nadir + Peppermint) collected by the hikers who choose to experience IH+ as an artist-led event. During the participatory event, activities take place at the ‘campsite’ installation presented in the gallery, such activities include trading stories around a computer-campfire (see Figure 1), “tweeting posts that enter a global archive of #wilderness consciousness inside an expedition-quality tent, documenting wild happenings in the outdoors, and collecting found unnatural objects made of natural materials for display on log displays made of recycled LCD screens.” (Nadir + Peppermint) Possibilities of the Collective

With regards to the collection of all three interconnected artworks, ecoarttech states that they are intended to “create a network of new media, participatory eco-artworks, all of which seek to foster study and observation of the diverse ecological landscape of twenty-first-century-life.” This explanation of the artists’ intent parallels to Sher Doruff’s ideal approach to the practice of new media and live arts, discussed in the V2 publication ‘Making Art of Databases’ (2003). Doruff argues that the dialogue concerning collaborative practice in new media and live arts engenders a focus that “extends well beyond the conventions of working relationships in inter-disciplinary arts projects and moves towards a synergy that marginalizes individual contribution over the relational dynamics and emergent possibilities of the collective.” (Doruff, 73). Yet, reciprocally, this collective is only able to “flourish from diversity and difference among its group,” thus looking “towards the inter-authorship process as viable artistic expression.” (Doruff, 73) 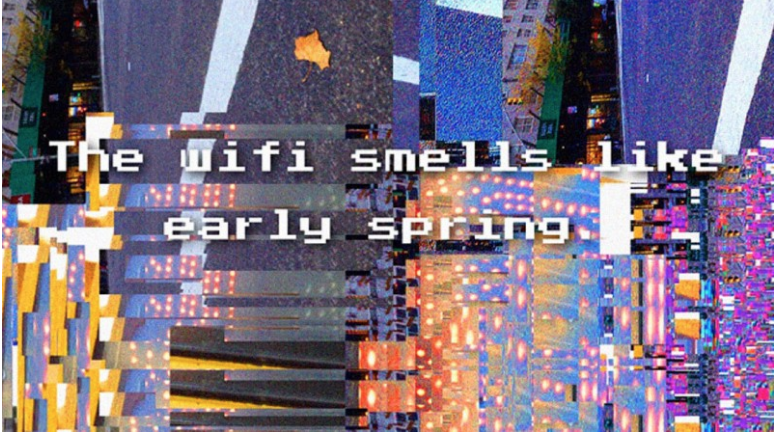 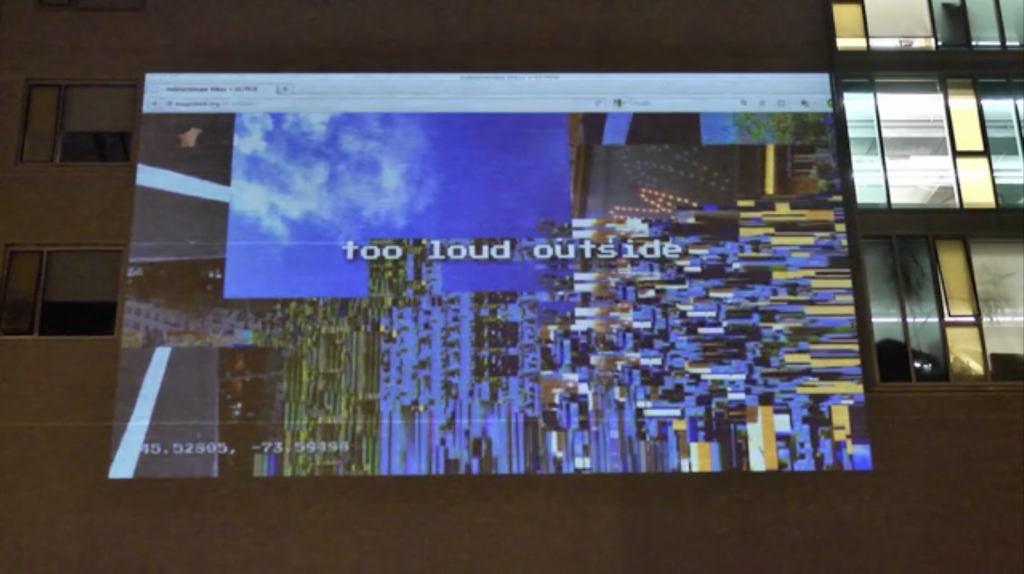 Wilderness Collider only functions as a completed artwork through the combination of both the selective look at an individual’s unique written thought (e.g. “too loud outside”; see Figure 4) as well as through the collective sum of varying images.  Thus, Wilderness Collider exemplifies the technical need for the inclusion of both the selective and the collective for the collective’s recognition of inter-authorship as being valid artistic expression. Yet, moreover, the work exemplifies how through this particular use of media technologies described by Doruff, media technologies are able to engender “new types of social interaction and critical discourse.” (Doruff, 73) In this case, the critical discourse revolves around current understandings of an ‘environment,’ be it the wilderness, the urban environment, the gallery environment, or a digital environment. Considering Paul Virilio’s argument in Speed and Information: Cyberspace Alarm! (1995) that, “together with the build-up of information superhighways we are facing a new phenomenon: loss of orientation,” this critical environment-based dialogue finds supreme relevance and necessity amidst our contemporary network society.

A Generative, ‘Kaleidoscopic,’ and Real-time Nature

Wilderness Collider is a “live, generative, data-driven installation,” and thus “will never manifest the same way twice.” (Nadir + Peppermint) This installation’s ‘‘kaleidoscopic,’ real-time nature provokes the notion of “how we perceive the passing of time in modern societies,” as being “closely linked and mediated to our daily experiences and social interactions through digital networks and mobile devices.” (Sora, 2017) It asks its participants to readdress the questions that arose in the 1990s when the “large-scale consolidation of the internet and information and communication technologies…completely changed our notion of time, bringing into question the temporal and spatial relationships we have with the media, its content and in consequence, our life experiences.” (Sora, 2017) Wilderness Collider leads us towards asking questions such as: To what extent does this ever-changing video-feed challenge our views on the preservation of art, of digital/video art, or even of our digitally expressed thoughts? How does the spatial experience of the outdoors compare to that of the installation in the gallery? How does the length of time spent on the hike influence a meditative experience on the environment, compared to discussions in a lecture hall or in our own dining rooms? Furthermore, how does the generative, live video-feed correlate to our current definition of “timeless”?

In ‘The Rise of the Network Society: The Information Age: Economy, Society, and Culture’ (2011), Castells re-assesses his previously published thoughts (1996), which discussed the influence of a network society upon the global perception of space and time. With regards to his past notions on time, he states that “[t]he clock time of the industrial age is being gradually replaced by what I conceptualized a timeless time: the kind of time that occurs when in a given context, such as the network society, there is systematic perturbation in the sequential order of the social practices performed in this context.” In other words, a contemporary desire to “annihilate time” being present everywhere, all the time, through the use of technology. Through ecoarttech’s aim to re-purpose the use of our smartphones, this contemporary desire that Castells alludes to is also re-purposed. Instead of the individual trying to “annihilate time,” through the use of their smartphone, the artists offer to take this task upon themselves through the generative nature of the video installation. With the burden of this task removed from the participant, they are given the opportunity to slow down and give themselves generously to time, to look at their environment, and/or meditate upon their surroundings.