Knockout or next round? All eyes towards the battle between the online platform Uber and London’s transport regulation system ‘TfL’. Employee conditions and security affairs triggered the next round in the public discussion about how Uber treats its driver workforce. Is there a bright new future for digital labor in the digital economy or is it the latest update of exploitive capitalism?

Twitter User’s view about the behaviour of societies towards private transportation: 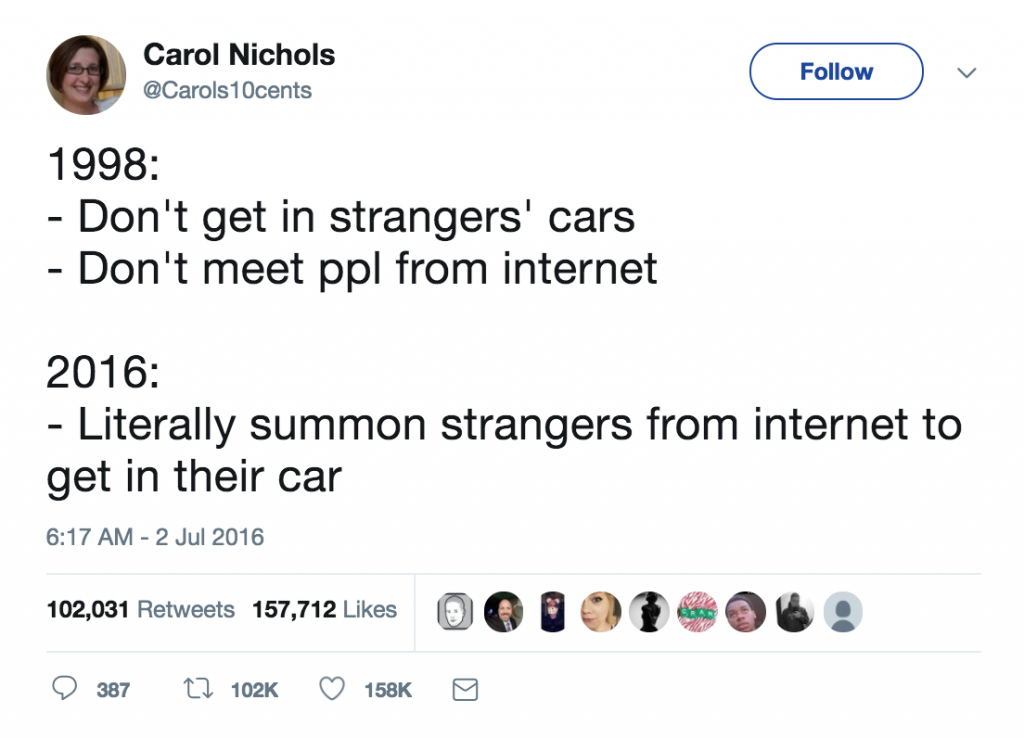 This tweets points out what kind of labor is offered by Uber and how much general trust the users have towards the drivers of this online platform.

First things first. In September 2017, London’s official transportation regulator ’Transport for London’  (TfL) announced an official statement saying they declined Uber’s request of proceeding their transport licence in London (Lomas, 2017). TfL declared that Uber’s shortage of corporate responsibility for public security is one of the main reasons for the decline. So far, Uber is granted to operate until the licence runs out at September 30th (Davies, 2017).

Uber’s General Manager Tom Elvidge announced via Twitter that this decision affects more than 3.5 million people in London who use the Uber application and furthermore 40,000 licensed drivers would lose their job (Mezzofiore, 2017). He attacked the decision by claiming that London shows adverse reactions towards innovation by declining the request. To defend its biggest market, Uber intend to appeal to a court in order to take legal action (Mezzofiore, 2017).

Londons mayor Sadiq Khan reacted to this statement with a Twitter post pointing out that innovation and new technology are an important part of London; Nevertheless, every part needs to fulfil its duty and follow the laws. Safety and security have first priority and thats why he supports the TfL’s decision (Khan, 2017)

Uber already faced several regulation approaches in the past. Cities like Austin or Philadelphia tried to prohibit Uber from operating in their area, in the end, the regulation was temporary (Vock, 2013). Still, Londons regulators seem to be more serious about this topic and the result could be a regulation towards the online platform Uber and hence the working conditions.

Uber is by far one of the best examples when it comes to the phenomena of the ’shared economy’. The online platform allows its user to offer and purchase items and services among each other (Cannon & Lawrence 2014). In this Economy, platforms support the sharing of items and services among people. Individuals are separated into two groups: consumers and (micro)entrepreneurs. (Micro)entrepreneurs provide or sell these services or assets and consumers buy or share them. In this particular case, Uber connects drivers and customers trough their application (Dillahunt & Malone, 2015). The idea behind the ‘sharing economy’ is that people share spare time or space with others who want those (Malhotra & Van Alstyne, 2014).  Sadly, the capitalist firms act like gatekeeper between supply and demand in order to monetise this process and therefore turn the sharing approach into a selling mechanism (Srnicek, 2016). This notional situation helps neither the public or the Uber drivers. The new trial of regulation could end in a disaster out of Uber’s perspective. London is on of the lucrative markets and consequently important to the Uber community (Hughes, 2017).

The commercial company Uber is currently valued at $ 60 billion and provides work for 1000s of people (Dickey, 2017). Besides the revenue, Uber affects modern business models in the digital economy and transports its system by challenging regulators. Uber’s responsibility is to continue the political and public debate. Uber provides an efficient and affordable service which threatens established transportation systems and it’s operators. The fact that Uber offered its platform since 2012 in London makes Tfl’s decision a big deal (Lomas, 2017). The drivers of Uber were able to undercut the fares of its competitors, in this case the black cap drivers of London. Furthermore, the online platform offered its service to the existing taxis but they rejected. In addition, several protests were organised by the black cabs during the recent years with no success of stopping Uber’s growth. The ongoing discussion between Uber and political regulators does not seem do have an end. Uber obviously asks for forgiveness instead of permission. The cooperation obtained the ‘status as a market disruptive innovator’ because of its huge rise and the debate about ’shared economy’ and ‘platform capitalism’ (Dudley,Banister, and Schwanen, 2017), (Christensen, 2010). It seems like that the working conditions are not the primary focus of Uber even though it’s financial situation could provide a fair labor environment.

The Term ‘Uberisation’ has derived from the name of the company, Uber. It is “associated with platform intermediation for services in the transportation and hospitality industry based on dynamic pricing models.” (Radu & Psaila 2017). More corporation examples in the field of ’shared economy’ are Airbnb, GameFly, and Fashionhire. These business models shape the governance of work, especially work regulations and the relationship between employer and employee. The digital age takes a huge part in disrupting the labor market by reducing the negation power of labor unions in the digital economy. The fact that it is difficult to connect drivers to a certified union is another coefficient of the business model. The impact on global economy is past dispute. In addition affirmative side effects contain demand overage and efficient use of resources. Besides this positive effects the digital labor still hunger for more security and stability like every other employee. Uber sees itself as a platform and its users  rather as independent drivers and contractors than employees. Which implies that the drivers do not gain the usual employee benefits. It depends on the regulators and their authority. In Tokyo, Uber operates as a travel agent. To consider another part in this debate, in between the years 2013 and 2015 Uber spent about $ 1 million on lobbyists; that is two times the amount which Facebook and Apple spent (Radu & Psaila, 2017). The conflict between Uber and regulators exhausts a lot of resources and manpower on both sides. Uber critics claim that the background checks are one of the mayor issues. Currently the method of selection the drivers does not require fingerprints which could give criminals access to the job position. Several situations appeared where passengers experienced physical attacks and harms. Uber offers minimal protection to their riders which opens up room for regulation and discussion (Radu & Psaila, 2017). The critiques show that Uber fails in both providing fair working conditions and offering a safe ride for it’s users.

In the debate around the capitalistic nature of online platforms, Pasquale argues that global platforms rather reduce the stability of employment instead of supporting fair labor (Pasquale, 2017). Uber may offer a good service to the consumer of its service but it shows lacks in supporting the people behind this service. It dramatically changed the urban transportation system while avoiding labor law and other typical market regulation factors.

In his book ‘platform capitalism’, Nick Srnicek shows a critical view towards the leading capitalist firms like Uber and AirBnB. He points out that data is the most crucial factor for the digital business models. This data management allows them to rule over their competitors. Furthermore, these platforms rely on the ’network effect’ which automatically ends up in monopolistic structures. The bright new future of ’shared economy’ is questioned by this book by arguing that society lives in the latest form of exploitive capitalism. A minor number of monopolistic platforms held responsibility for the economies environment and claiming the benefits for their own (Srnicek, 2016). The author calls these platforms the new ‘intermediaries’ between its users such as the people who provide the service, its consumers and the advertisers. In 2016, advertising platforms such as Facebook, Alibaba, and Google alone earned over fifty percent of the digital advertisement revenue. These established platforms, including Uber, have the monopolistic ability to benefit through user generated content and services with no or little input on their part (Srnicek, 2016). Especially Uber’s business model includes minimal support towards their community while providing the platform as connection and communication requirements for users to operate on.

Uber has faced a lot of regulation issues on a global scale. In most of these cases Uber has got away with only a black eye because the bans were temporary instead of being strictly enforced. London’s TfL attempt to regulate the online platform Uber shows how powerful the market position of this private intermediary is. Nick Srnicek’s contribution towards this academic debate about the capitalistic nature of the digital economy points out that competition in the markets is almost not existing but rather dominant monopolistic platforms emerged. There seem to be a tendency that regulation attempts end up in a temporary penalty which indicates what powerful positions  platforms hold in the world economy. This situation has huge impact on the labor market which highly depends on the outcome of this public debate. Considering the work conditions and under average wages, Uber’s driver are still the slaves of the neo-liberalism capitalist system we live in but there are governmental approaches to regulate the online platform and hence provide a fair labor market in the digital century.

Dickey, Megan Rose. “Benchmark Says Uber Could Be ‘Comfortably’ Worth over $100 Billion in next Couple of Years.” TechCrunch, http://social.techcrunch.com/2017/08/07/benchmark-uber-valuation/. Accessed 5 Nov. 2017.

Hughes, Matthew. “Before You Celebrate Uber Losing Its London License, Think of the Drivers.” The Next Web, 22 Sept. 2017, https://thenextweb.com/insider/2017/09/22/think-of-the-drivers-before-celebrating-uber-losing-its-license/.

Mezzofiore, Gianluca. “Uber Is Losing Its Licence to Operate in London, but Don’t Panic Just yet.” Mashable, http://mashable.com/2017/09/22/uber-loses-licence-operate-london/. Accessed 5 Nov. 2017.