This visualization is intended to give an overview of the concept of “Rentism” as it is discussed in the writings of 5 scholars: Joseph Stiglitz, Christian Marazzi, David Harvey, Thomas Piketty and Peter Frase. The visualization is a product of a discussion we had in the “Platform Capitalism” class about the future of rentism. 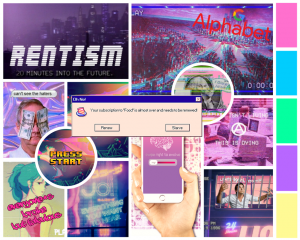 The notion of rentism or rent-seeking is explained by Stiglitz as “those at the top… getting income not as a reward to creating wealth but by grabbing a larger share of the wealth that would otherwise have been produced without their effort.” (p. 92).

At the top right corner, there are images that represent the concept of the “Google model”, presented by Marazzi (p. 57). It can be identified as a new mode of producing goods and services in our age, in which corporations save costs on labor by making the consumers the testers of their products’ beta versions.

Another principle we discussed is “Gamification” (Frase, 151), in which companies make processes that harvest information entertaining in order to encourage users to complete tasks willingly and for free. This is represented by the “press start” video game button over a mundane activity: driving.

Rentism of intellectual property is represented by Two images:

The concept of “Artifical scarcity”, brought forth by Frase (p. 142) is seen in four groups of images: 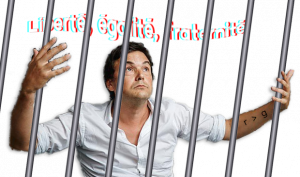 An image of the economist Thomas Piketty behind bars

The image of Piketty behind bars represents how his ideas – of growing inequality due to a financial system that favors profit from accumulated wealth rather than from labor wage – will become no longer acceptable in a neo-feudalist society of gamification and artificial scarcity.

Stiglitz, J. E. (2012). “Rent Seeking and The Making of an Unequal Society” in The Price of Inequality: How Today’s Divided Society Endangers Our Future. New York: W. W. Norton & Company.