In relation to the theme of neoliberalism, we chose to explore the creation of the homo-economicus and the factors that play into it: 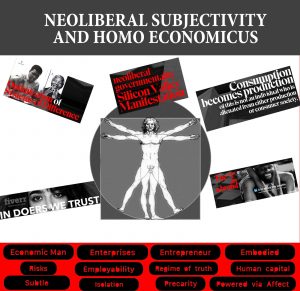 Both classical and neo-liberalism place importance on man as an economic subject. They both have a conception of the individual as “homo economicus”, a particular anthropology of man. There is a shift in “homo economicus” as an exchanging creature to a competitive creature. Foucault says that while exchange was initially considered to be natural, competition is understood as an artificial relation that must be protected. Competition necessitates a constant intervention on the part of the state, not on the market, but on the conditions of the market. So what does this mean for economics?

In response, Foucault cites American economist Gary Becker: “Economics is the science which studies human behavior as relationship between ends and scarce means which have alternate uses.” (Foucault, 2008: 235).

This means that everything for we human do attempt to realize an end, from marriage, to crime, to expenditures on children, can be understood “economically” according to a particular calculation of cost for benefit. Secondly, this entails a massive redefinition of “labor” and the “worker.” The worker has become “human capital”.

Salary or wages become the revenue that is earned on an initial investment, an investment in one’s skills or abilities. Anything that provides an increase of one’s the capacity to earn income, feel satisfied with themselves is an investment in human capital. Of course a large portion of “human capital,” is simply given and cannot be improved – such as the our genetic material, as well as our race or class. Foucault says that natural limit can be conquered through technologies; from plastic surgery to possible genetic engineering that make it possible to transform our one man shows, saying “Homo economicus is an entrepreneur, an entrepreneur of himself”, as echoed by Foucault and Becker himself (who literally wrote the book on Human Capital). So neoliberalism presents us with an image of society made up of self- interested individuals.

So in that regard, what is lost in neoliberalism is the critical distance between the citizen and the economic subject, as in classical liberalism.