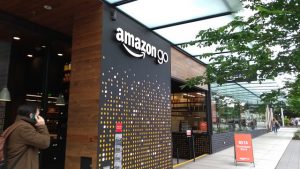 Recently, Amazon opened its second cashier-free Go store in the United States and announced the planning  3000 new ones by the year of 2021. Other companies, such as Tesco and Ikea are planning on testing such cashless systems as well, and with the ever growing debate of data privacy, it is time to re-evaluate this new concept of digital consumption and what it could mean for our data privacy. Although the store was already introduced in 2016, Amazon opened its doors to the public just beginning of this year. The concept is easy: Customers enter the store by logging into their Amazon App and scanning their phones at the entry, and whilst they shop through the store, AI, cameras and sensors keep track of the purchasing behavior, add or delete items that costumers put in or takes out of his/her shopping chart. All purchased items are then logged onto the customer´s Amazon account and paid automatically through there. Whilst this new store concept dismisses the need for human cashiers, it still demands employers physically being in the store, in order to stack up and keeping an eye on it´s customers (Morris, 2018).

What´s all the fuss about it?
What are the benefits for such a new way of product purchasing? The most obvious one would be the fact that one does not have to think about forgetting their wallets at home. As customers pay through their smartphones, they can purchase goods whenever, whether they left their cards or wallets at home or did not have enough paper money on them. From this viewpoint, this new way of purchasing goods is a step into making consumer life´s easier and more convenient. On the other hand, recent debates about the privacy issue concerning Big Data begs the question as to how personal data is stored and used through this new form of digital purchasing (Tene and Polonetsky, 2011). 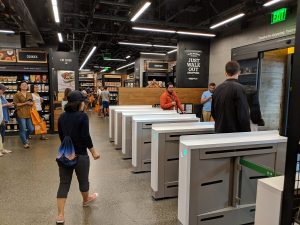 Amazon Go and Big Data
Where does Big Data fit into this debate? First of, one needs to remind of the fact that it every purchase made digitally is stored and can be traced back to the customer, whether it be through the use of credit and debit cards, or through Apps and online platforms like Amazon Go. The only way one can avoid this constant surveillance would be by purchasing goods with paper money (Akinola, 2012). While banks track purchase behavior of their customers, Amazon, as most online companies, makes use of the data for future customer improvement (Boyd and Crawford, 2012). Through the use of cameras, AIs, and sensors in the stores, Amazon not only is able put a face on the customer´s account, but also know exactly what food and drinks they buy, when they bought it and how long it took them to buy them (Kelly, 2018). Because the purchase is paid through one´s Amazon account, one can assume that the purchase data is linked to one´s private Amazon account, and through this, Amazon has an easier time to better detect patterns of consumption behavior, which is what the company has been doing since its beginning (Markmann, 2017). Through this, algorithms and AI are better able to analyze and personalize one´s consumption behavior, which can ease to target specific products and advertisements for their customers (Linden, Smith and York, 2003). It is a known fact that online companies, such as Facebook and Google exchange and share user´s metadata for the purpose of customized marketing for free access of the website or the app (Van Dijck, 2014, p.1). One can only assume that this will not be different with data obtained through purchases on Amazon Go. While many agree that this way of data usage facilitates customer experiences, others might see this as a new threat for personal data and freedom. 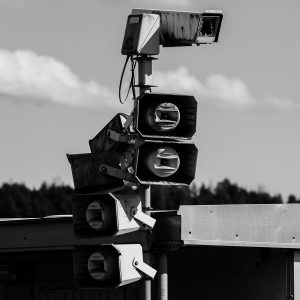 Image- Big Brother is watching you

Big Brother, is it you?
This idea that new technologies (such as AI, sensors and cameras) track and registers all of our every move and observes if one is doing anything illegal, strongly reminds of an digital adaptation of the idea of the panopticon, which was originally introduced as a new way of constant control and surveillance of prisoners, or even of the dystopian fictional idea of “Big Brother is watching you”, in the book 1984 (Gill, 1995). It is legitimate for Amazon to implement these technologies to prevent people from stealing goods from their store, but on the other hand it also enables them to analyze what type of person you are, simply by looking at one´s pattern of consumption. Through constant control over the behavior of customers, Amazon gains a position of power, with which have the ability to control and nudge consumers in consuming different/preferred products. For example, when people buy goods on Amazon.com, the webpage gives customers suggestions of what to buy next, the so called “Customers who bought this also bought” feature (Tene and Polonetsky, 2011, p. 65). While this is a feature used for the online purchase on Amazon.com, one can assume that this functions the same with Amazon Go stores. This strategic tactic of nudging customers in a certain direction though is not per se a negative thing, as nudging does not oblige anyone to buy anything, but rather leads one to the right direction, for example by advertising certain health products in order for one to lead a healthier life (Thaler and Sunstein, 2008).

What are we to make of this?
Of course one mustn’t deny that the concept of cashless stores, such as Amazon Go, has its perks in making costumers experience easier, faster and even to a certain extent more personalized. And in an ever-evolving digitalized world, it is inevitable that this customer experience will be implemented into the future of consumerism. It needs to be clear though that stores like these are a step further into a world in which governments and organizations have full control over our every move. If all convenience stores would work like the Amazon Go model, then not only would anonymous online purchasing be impossible, but even the most mundane acts of buying food and drinks will not be able without being monitored and analyzed in our daily basis. We have to ask the question, do we really want to live in a world, in which every move we do is being traced and analyzed, even when moving in an seemingly offline space, such as a normal supermarket?