CareAI: A Solution for African Healthcare?

The concept of artificial intelligence as we know it today first appeared in 1956, however, it was Leonardo Da Vinci who initially set the stage for the development of this field with his sketches of Robots (Hamet and Tremblay). Since then, the field has evolved and spread across many disciplines, including healthcare where, especially recently, it offers great promises. One of such promises is helping Africa improve state of their healthcare system.

In June 2018, European Commission presented a number of projects and inventions that use AI, and that are based on a blockchain technology. One such project is called CareAI which is designed for both refugee camps across Europe, but also for the use in African countries. Especially there the possibilities it offers are appealing as the ratio of doctors to patients is extremely low. Consider only, that in 2017 it was reported that 25 percent of global diseases had their source in Africa, but at the same time, the continent has only 2 – 3 percent of the doctors that are in the world (Adebayo).

Africa has already experienced the possibilities that technological advancement can offer. Doctors in bigger cities and workers of NGOs already use apps to detect illnesses and diseases connected to problems with vision for instance (Adebayo; Alistair). However, these are still available mostly to people who have access to medical centres and medical staff. In this regard, CareAI would be ground-breaking as it promises to offer basic health condition analysis to citizens of remote areas, illegal immigrants, and disadvantages minorities (Ndubuisi, “How New Technologies Could Transform Africa’s Healthcare System”) while offering them anonymity.

However, there are still questions connected to the use of CareAI which include issues of data collection, ownership of data, and whether it could actually work in Africa.

CareAI is based on a blockchain technology, and uses “an anonymous distributed healthcare architecture” (Ndubuisi, “How New Technologies Could Transform Africa’s Healthcare System”) to diagnose people with infectious diseases such as malaria, tuberculosis, etc. It works by using the machine, a finger prick and a lab-on-a-chip where a person comes, uses a prick to get a blood sample from their finger, puts it onto a chip and inserts into the machine. The machine can within seconds tell them whether they are infectious, whether they should seek further medical assistance, or gives them prescription to visit a pharmacy (Ndubuisi, “How New Technologies Could Transform Africa’s Healthcare System”). Blockchain, a basis for the functioning of CareAI, is a software protocol which operates with ordered sequences, called blocks which contain information. These blocks are distributed across a set of nodes, which are individual computers in a peer-to-peer network. The information stored on a blockchain can be accessed by anyone but cannot be altered (Vishal). 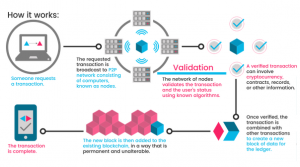 Image Source: “How Does Blockchain Technology Change The Security Landscape In The Finance Sector”

In connection to CareAI, the principle lays in the machine having access to vast amounts of medical data stored on a blockchain. These data come from libraries, research centres, medical journals, etc., so when the machine analyses the blood sample, it connects the components that are found in it with the information that is found on a blockchain (Ndubuisi, “How New Technologies Could Transform Africa’s Health Care System”). To give an example, if the information on a blockchain say that components “A” and “B” in blood mean tuberculosis, and “A” and “B” is found in your blood, it means that you have tuberculosis. Because the data that it uses for the diagnosis are accessed from many sources, it offers high levels of reliability of the diagnoses (Koshechkin et. al).

Since the information on a blockchain are distributed across a wide network, it offers a safe solution for storage of information as it cannot be easily attacked. It also does not require any third-party interventions in order to maintain the blockchain functionable.

Due to its distributed nature and immutability, blockchain has been considered a safe option to centralized systems. However, a group of researchers conducted an investigation in 2017 pointing out that there has not been any study that would systematically examine the risks of blockchain (Xiaoqi et al.). One of the major concerns raised when used in healthcare is privacy as, due to the nature of its functioning, the data, even though anonymized, is openly accessible to the users of blockchain. The danger, than, lays in the potential possibility to link the data to a particular user (Vishal). Despite this it has been increasingly used in medicine in recent years.

Also, the distributed and anonymized data can be accessible to governments and private institutions which raises questions of the rights to access those data. Blockchain technologies address this by using smart contracts (to put it simply, electronic contracts used in blockchain) but the real question is, how are those contracts going to be created in Africa, where most of the governments are not ready to adopt complex legislations connected to the high level of digitization, and protection of patients’ rights and online data.

The possibility to collect and analyse big data through blockchain is appealing to most governments because their analysis could help them, and private institutions create future plans for the prevention of various diseases, risk forecasting and improve healthcare performance. In turn, as Moon-Koo and Park emphasize that would mean reduced expenditures for the curation of diseases. In African terms, it would mean more money for the governments that could be invested into the education of healthcare professionals who now are fleeing from Africa to Europe to get better education as well as better paid jobs (Adebayo).

The concept of CareAI as planned by European Commission – offering anonymous diagnosis of health conditions to disadvantaged groups – sounds appealing. However, apart from privacy concerns, and data management concerns, there are also questions of access to CareAI. Even though the machines are planned to be installed in the pubic places such as mosques, churches or markets, the question is how the information about their use could be conveyed to people. NGOs certainly offer partial response to this question, but what is the probability that people who are illegally living in a country, or who are from a prosecuted minority be willing to access those machines, especially if placed in public areas? Will such person be willing to visit a pharmacy or seek further medical help if they were diagnosed with a disease? Since the data of those who will use CareAI will be stored on a blockchain, how likely it is that those people will have access to their own data?

“How Does Blockchain Technology Change The Security Landscape In The Finance Sector.” Cygnet Infotech, 14 Dec. 2017, www.cygnet-infotech.com/blog/how-does-blockchain-technology-change-the-security-landscape-in-the-finance-sector.