Any person who has seen the critically acclaimed Netflix show ‘Black Mirror’ will think the following is straight out of a dystopian futurology thriller. Unfortunately, the idea of every member in society being attributed a ‘social credit score’ based on their actions will soon become reality for close to 1.4 billion people in China. The Social Credit System or 社会信用体系 in Chinese is designed by the Chinese government to create a standardized and uniform trust score for every individual and business in the country. According to the Chinese Communist Party, the system will “allow the trustworthy to roam freely under heaven while making it hard for the discredited to take a single step” (Carney) source. Essentially, the system works very simply. If a person is registered or seen doing a good act, such as engage in charity work, recycle garbage or donate blood, their credit or ‘trust’ score will go up (Jing Zeng) source. Consequently, when an individual engages in ‘bad’ behaviour such as smoking in a non-smoking area, jaywalking, or not turning up to a restaurant despite reservations, will have their score reduced. The consequence of this score? A person who has a good credit score might have their wait times at a hospital reduced, have access to cheaper public transport or receive free gym memberships (Dockrill) source. Those who get a score below a certain level will be blacklisted and will face a number of consequences such as restricted mobility, blocking of social media presence, or arrest. Individuals who get blacklisted by failing to gather a certain social credit score are deemed ‘untrustworthy and are publicly shamed via large billboards or local websites (Jing Zeng) source. The score is managed and calculated by an infrastructure that includes a network of an estimated 200 million cctv cameras, as well as an automated algorithms comprised of billions of lines of code, designed to keep track of and process your every move (Mozur) source. The goal is governance by algorithm, where the threat of having your credit score reduced by the all seeing eye is enough to force citizens into compliant behavior. 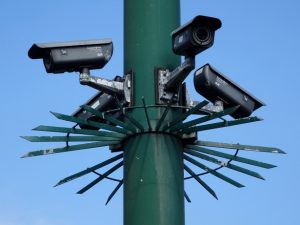 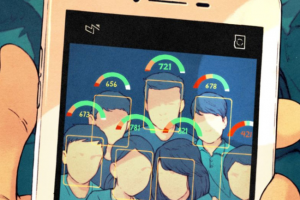 These developments fall in line with different developments that are happening globally aimed   at employing big data solutions in commerce, gamification and the continued growth of toward a digital, automated society. Furthermore, concerns with privacy are equally prominent when discussing the topic of ‘New Media’. I would argue that the Chinese Social Credit System should be viewed as new media not only because it is in early stages of development, but also because it fits into several of the eight ways of thinking about new media as described by Lev Manovich in his 2001 article ‘New Media from Borges to HTML’. For example, he argues that we can see new media as “using computer technology as a distribution platform” or as “digital data controlled by software” (Manovich, 10-11) source. Another way of understanding this type of ‘new media’ is through the words of Gitelman & Pingree as “a cultural process that involves not only the actual transmission of information but also the ritualized collocation of senders and recipients” (Gitelman, and Pingree). In my example, the sender and receiver might seem slightly ambiguous but the traditional relationship still exists, also in the case of China’s social credit system. The receivers of the information are clear, but due to the nature of the way the data about an individual is being sent or collected, it may not always be clear to someone that they are engaging in a mediated exchange between themselves and another actor. This becomes especially worrying if that actor has the power to restrict access and mobility, rendering someone virtually paralyzed.

China’s plans to implement the social credit score can viewed from a wider lens, one which concerns itself with the discussion surrounding privacy and concerns that companies and governments are using ‘our’ big data for purposes that are being questioned by the public on moral and ethical grounds. Concerns of power and the ownership of big data are furthermore important to consider. China’s example shows that the future of our data is unsure, and the question of what large multinational corporations are using our data for, and what kind of consequences it allows them to have, remain unclear. Optimists in the field see a variety of uses and applications for Big Data in both commercial as well as non-commercial fields. Pessimists are less positive about its potential and warn for a cautious approach. They see these potentials are harmful, and much like George Orwell’s 1984, want to avoid having Big Brother watching. The idea of the panopticon (a prison in which all inmates are able to be watched from a central point without the inmates knowing they are being watched) as popularized by Michel Foucault is incredibly appropriate here (Foucault). In his seminal 1975 work ‘Discipline and Punish’, Foucault argues that the panopticon can be seen as a tool for disciplinary power, and if we examine the Chinese system, resemblances can be identified.

Recently, scholars have been using the metaphor of the panopticon regularly in relation to social media and its surveilling powers. However as Jake Goldenfein researcher at Melbourne University argues “the relevance of the panopticon as a metaphor begins to wither when we start thinking about whether contemporary types of visuality (effectively digital and data-driven) are analogous to the central tower concept. For example, whether this type of visuality is as asymmetrical, and – I think more importantly – being co-opted for the same political exercise. Does the fact that we don’t know we’re being watched mean we are being normalized in the way the panopticon was intended to correct behaviour?” (McMullan, para. 18). However, I would argue that where this quote serves to dismiss its use in relation to social media, it only reinforces its application to our case of China’s Social Credit System. 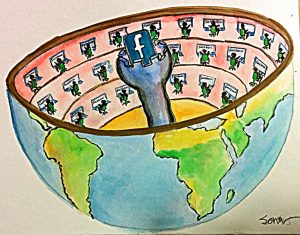