Natural Cycles is a digital method of birth control cleared by regulators both in the US and Europe. It claims to be a hormone-free alternative that brings a new level of accuracy to fertility tracking. But is it made for everyone?

“Happy measuring, with Natural Cycles” a female voice wishes you while three beautiful women smile at the camera. This is the ending of the instructional video of Natural Cycles (NC), a self-proclaimed revolutionary app designed as a “natural method of birth control” that promises to “empower” users with knowledge about their “unique cycles” (Natural Cycles).

The fertility app has been the focus of media attention due to its claims of being as effective as the pill and its approval by the FDA as “digital birth control” (Natural Cycles; Lieber). The app relies on a proprietary algorithm and the use of a basal thermometer to track body temperature in order to determine when users can have unprotected sex without getting pregnant. While the technology is new, the concept is not:  the app is a 2.0 version of an old contraceptive method, the Fertility Awareness Method (FAM), where individuals trying to prevent (or plan) a pregnancy count their cycles’ days. Thus, fertility apps like NC fit in women’s long-established self-monitoring routines, but promise precision and a “detailed and scientific approach that is able to produce data on a range of bodily functions that, when aggregated, can provide greater accuracy than more traditional forms of self-tracking” (Lupton, “Quantified Sex” 6).

The use of fertility apps is part of the bigger trend of health digitalization and participatory surveillance practices that has resulted in our reliance on apps for everything from counting our daily steps to drinking more water (Lupton, “Apps as Artefacts”; “Quantified Sex”). As these technologies become ubiquitous and are embraced by government agencies it is imperative to understand how they reflect and produce the world we live in.

In this context, this seemingly inoffensive app demands further scrutiny, as it is symptomatic of greater social and cultural forces in play. To fully grasp the relevance of these new technologies it is necessary to shift the focus from the apps’ contraceptive efficacy to questions regarding its power to shape our bodies and identities and to create new practices (Walker; Light et. al). Accordingly, apps must be approached as sociocultural artefacts produced by humans which embody cultural values while producing and defining them (Lupton, “Apps as Artefacts”; Pfaffenberger; Stanfill). In particular, so-called contraceptive apps like NC are interesting because their interfaces make certain identities intelligible (MacLeod & McArthur), re-produce gender norms and influence our everyday routines.

Fertility apps tend to be targeted to women and NC is not the exception (Lupton, “Quantified Sex”). Its introductory video and instructions show feminine women in their late twenties happily waking up to measure their temperature and don’t bring male sexual partners -or any sexual partners- into the equation. More importantly, the app’s registration form does not allow users to select a gender identity. Thus, not only does the app construct reproduction as women’s responsibility, it also (re)produces binary and heteronormative perceptions that conflate sex and gender (MacLeod & McArthur). 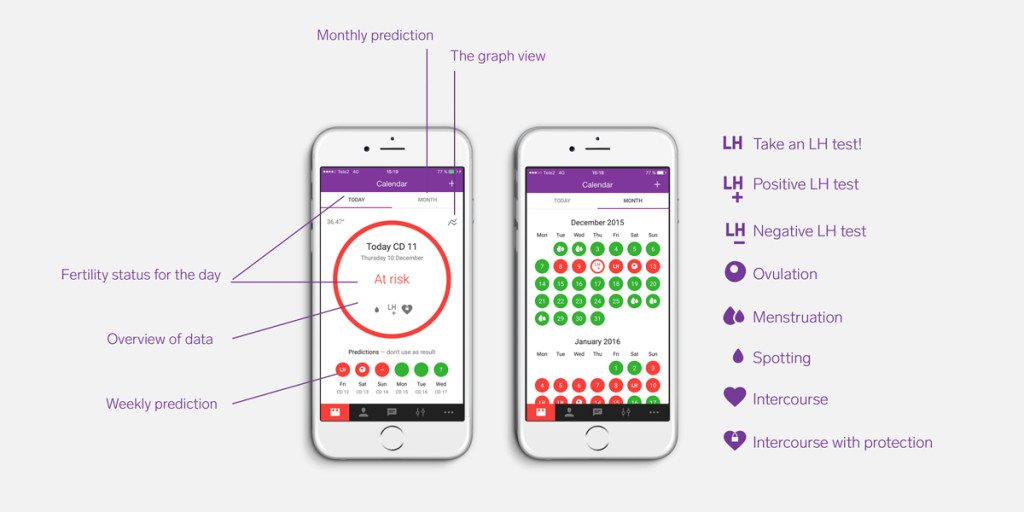 Moreover, by requesting users to upload several indicators and constantly expecting new data, NC contributes to discourses on the complexity of female bodies and portrays quantitative data as the only way to make female bodies comprehensible. Hence, the perceived perks of neutrality provided by quantitative data is endorsed over people’s own bodily experiences (Lupton, “Quantified Sex”).

At first sight, the app’s requirements seem easy to comply with: users need to be more than eighteen years old, buy a subscription and a thermometer and measure their temperature daily. A closer look at the app and user manual, however, reveals that its efficacy depends on a series of behaviors that, in turn, give rise to a certain (ideal) user. To work properly, the app expects users to upload their temperature at least five times a week (and even considers doing so for the first time an “achievement”). However, there are circumstances that affect basal temperature and require users to mark that day’s temperature as “deviant”. These circumstances include irregular sleep, use of medications or drugs, feeling hungover, extensive smoking, feeling sick or stressed, traveling and even snoozing. Thus, NC’s users should be disciplined and their routine must be tightly controlled –at least five times a week. The app therefore demands that users’ everyday practices revolve around their reproductive choices and (re)produces a notion of normality – as opposed to “deviant”- where women avoid risk in order to be in control of their reproductive life.

The app’s interface and textual content give rise to practices and identities that fit into what some authors call the “wellness ideology” where the body becomes the only ‘truth system’ and self-optimization is promoted (Poole; Lieberman). Like the self-care movement, the app’s ideal subject is an affluent straight woman who wants to know and care for her body (Kisner). It is revealing that the official website’s testimonials come from “Cyclers” Maya, an entrepreneur and yoga teacher, and Sofie, a SEO consultant.

Moreover, NC shares with the broader wellness movement an emphasis on a “natural” approach through the aid of technical devices. Thus, even though this turn into bodily control isn’t new (Blei), digital devices, especially smartphones, have both expanded our ability to self-monitor and allowed tech savvy entrepreneurs to profit from it. Somewhat paradoxically, then, this call to “go natural” demands the use of (proprietary) algorithms and to surrender to data collection by private companies. Beyond issues of privacy (Privacy Rights Clearinghouse), this is telling of how our bodies have become technologized and how the female reproductive system has been reduced to a collection of numbers. Learning about our bodies, then, is just a matter of “happy measuring”.

Apps like NC may be useful tools, but in a society where bodies are being commodified and technological solutions are seen as the golden ticket of self-improvement, it is key to remember that technology and design are not neutral. New media objects have the power to reinforce certain values, shape bodies and minds and create new practices (Lupton “Apps as Artefacts”; Light et al.). Particularly, NC’s interface structures users’ identities as conforming to heteronormative and binary structures: because they have periods and can get pregnant users are assumed to be cis-women who have sex with men. Moreover, the app re-produce gender norms by constructing reproduction as women’s responsibility and not bringing (male) partners into the equation. Finally, the apps affordances influence users’ everyday routines and give rise to an ideal user who is constantly in control (Stanfill).

MacLeod, Caitlin, and Victoria McArthur. “The construction of gender in dating apps: an interface analysis of Tinder and Bumble.” Feminist Media Studies (2018): 1-19.