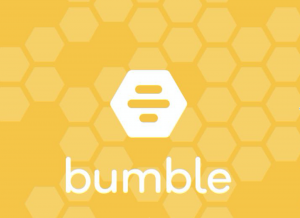 ABSTRACT – For all the single Juliets who are looking for a Romeo or for another Juliet, look no further. After dating apps like Tinder and Happn now a relatively new dating app has emerged: Bumble. Why Juliets name first? Because women call the shots on feminist dating app Bumble (Techcrunch.com). Which makes it the first dating app to provide this opportunity (Wired.uk.com). In that sense, how is feminism reflected in Bumble through their features on their app and on their website?

Swipe for Your Rights

The emphasis is very much on empowerment in the app

WhitneyWolf’s intention with Bumble is to change the dating status quo and framing female empowerment through the app (Guardian.com). Cheering for female empowerment is not something new: around 30 years ago, terms like ‘gender equality’ and ‘women’s empowerment’ were mobilized by feminists to draw attention on putting female rights on the international agenda (Cornwall and Rivas 396). By feminism is not only meant to focus on the individual being but also on the rooted structures of gender division in Western society (Lorber 8, 22).  The concept of empowerment can be described as the competency to make your own decisions. Before one can speak of empowerment there first must be disempowerment: empowerment is the process to change this disempowerment (Kabeer 13 – 14).

In today society gender discrimination, sexism and harassment is still a big issue. A recent example of this is the #MeToo movement.  And, unfortunately, with the arrival of social media, these issues also adapted to the online environment. The rise of social media platforms not only made it possible to interact with each other online but also gave an opening to some users to harass other users. There are a lot of harassment stories about the dating app Tinder where women were sent so-called dick pics or received rude sexual requests (Boyd & Ellison 211: Thompson 70).

To fight sexism, Wolf made it only possible for women to start or proceed with a conversation on her app because Wolf herself has experienced (online) harassment (Techcrunch.com). This is why Bumble introduces a zero tolerance policy to sexist comments made by users. When misogyny or sexism does occur, the user immediately gets banned (Guardian.com). Because of this battle on sexism Bumble is considered as a feminist app (nytimes.com).  Another reason why Wolf wanted to let women be the only one to initiate the first move is that “it is against nature, women don’t make the first move, it’s counter intuitive to everything” (Guardian.com).  On their website they amplify this, with this slogan: “when members of the opposite sex match on Bumble, women are required to make the first move, shifting old-fashioned power dynamics and encouraging equality from the start” (bumble.com)[1].

Standing up for woman rights is also visible on their webpage, where Bumble is described as a movement: where kindness, respect, and equality are encouraged (bumble.com). Bumble is considered as a feminist platform because of trying to put sexism down and to let women take the lead (nytimes.com).  Such digital platforms can create awareness for new debates about inequality, female empowerment or sexism. Both users or developers can influence, alter and shape the modes of communication through feminism (Bear 18). 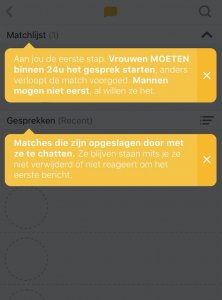 The rules of the app are explained, before starting a conversation.

The app Bumble radiates female empowerment: literally because a woman runs this business. The idea behind the app is not merely a new way to provide interaction between users, where women take the lead. But, Wolf also wants to change the perception of women being seen as desperate when being the first one to send a message to a guy (nypost.com). By wanting to change society’s view of the dating rules, where usually men are the first one to initiate the conversation (Perper & Weis 464), this idea can be considered as feministic.

After a connection between two users is made, only the female user will get the option to start a conversation within 24 hours. To have given the opportunity to be the one in control of the conversation – which in other dating applications is not possible – can create a sense of empowerment.  Not only do women take the lead, but if she does not initiate the conversation, the connection will disappear. However, this connection can be retrieved again with the paid version of the app.

With Bumble, users not only get the opportunity to explore the dating field but also to create new friendships.  As a user, you can choose whether to date, to make friends or the network for business. By using the friendship variant of the app, you are only allowed to connect with the same gender. By excluding the perception of man-woman friendships, this feature seems contrary to women empowerment and equality. Empowerment gives the possibility to make your own choices (Kabeer 13) which with this gender exclusion is rejected by Bumble. You either get to make a connection with the same gender or not.

Wolf only gives women the possibility to initiate a conversation on Bumble, to combat sexism among other reasons. By only giving women the virtue to initiate a conversation, suggests that only men are rude in the online dating field. This assumption of only men misbehaving in the dating field to me seems to strengthen the idea of inequality. Because women too can behave badly and rude. However, the app does provide room for discussion about the need for female empowerment and sexism in the digital (dating) landscape.

Although Bumble is not the first dating app on the digital market, it can still be seen as emergent because of the feminist aspects of the app: only women can initiate a conversation after a match between two, not same-sex users. With this feature, Wolf wants to evoke equality and empowerment, but battle sexism and harassment. However, this choice is excluded when interested in making new friendships, as users are only allowed to connect with the same gender.

For an app promoting equality and empowerment, another question comes to mind: where is the possibility for transgenders to relate in the app? Bumble aims for equality but lacks a choice for our transgender friends.  Maybe a next step could be to search for equality for all? Female, male and transgender.

Bennett, Jessica. “With Her Dating App, Women Are in Control.” The New York Times, The

Cornwall, Andrea, and Althea-Maria Rivas. “From ‘gender equality and ‘women’s

empowerment’ to global justice: reclaiming a transformative agenda for gender and

Crook, Jordan. “Bumble is Exactly Like Tinder Except Girls Are In Charge.” TechCrunch,

Kabeer, Naila. “Gender equality and women’s empowerment: A critical analysis of the third

Lober, J. “The Variety of Feminisms and their Contribution to Gender Equality.” Retrieved

Perper, Timothy, and David L. Weis. “Proceptive and rejective strategies of US and

Thompson, Laura. ““I can be your Tinder nightmare”: Harassment and misogyny in the online