How Can Art Be Subversive in a Platform System? The Case of Benjamin Grosser

What would happen if one morning, a morning like many others, after you got up, you discovered that your Facebook home page is completely empty, without any type of content?
I’m not talking about a crash or a bad internet connection, I’m referring to the possibility that all of your Facebook posts were free of words, images, videos, memes.Only blue and white shapes. The very shapes that until yesterday were only frameworks have now become the only discernible content. In short, an endless scrollable Facebook layout. Everything else is usable, interactive as before, limited only by the absence of meaning. You can comment but without seeing about what, about who and what. You can post a photo but no one will see it, you can even write a help message to your entire friends’ list but it will not help a great deal.
Against all odds this is not the beginning of a sci-fi story but the description of Safebook , the newest work of the USA based net-artist Benjamin Grosser, released on September 11th.
Safebook is nothing more than a browser extension that cuts out any kind of content from your facebook, whilst still allowing you to “use” it.

“Is it possible to defuse Facebook’s amplification of anxiety, division, and disinformation while still allowing users to post a status, leave a comment, or confirm a friend? With Safebook, the answer is yes!” (Grosser, about)

As we can read, from the author’s quote, the whole idea behind this project is to criticize the information surplus of our facebook home pages. This provocative work of art of Grosser, artist and professor at the University of Illinois at Urbana-Champaign, is the latest in a long line of software aimed at tackling several new media issues. His work is focused on the cultural, social, and political effects of software.

“What does it mean for human creativity when a computational system can paint its own artworks? How is an interface that foregrounds our friend count changing our conceptions of friendship? Who benefits when a software system can intuit how we feel?” (Grosser, about)

These are the key questions behind all of Benjamin Grosser’s work, characterised by a strong theoretical element, partly due to his academic research. His works are always in between provocation and hacktivism action. As the media theorist Daphne Dragona well said, Grosser’s research is based on a soft subversive art methodology (186), or rather he aims to create interactive objects to set-up a collective action against a given issue.
Dragona aims, in turn, to define what is meant by soft subversive and what is the role of art in a collective critical process, and used Thacker and Galloway’s concept of Exploit, raised in the namesake book from 2007.
It is from hacker language the term Exploit was derived, it refer to the process of discovering leaks in the technologies and use them to spread a specific message. The two American authors used it to explain how, in their view, is necessary to resist and reshape the network form, because “asymmetrical and hierarchical”. (Galloway et al, 81)

The above-mentioned thought is widely recognized as belonging to whole Grosser’s work, both in artistic and academic research. Lest’s consider one of his most famous software: ScaredMail. This project from 2013 is another web browser extension that adds to your email a signature contains “scared” words in order to disturb NSA surveillance. This software adds to every new e-mail’s signature a collection of probable NSA search terms associated to terrorism, algorithmically generated from an original source text: Ray Bradbury’s Fahrenheit 451.
Taking, again, into account Dragona’s text, this is a suitable example of soft subversive art. Strategy that aim to “obfuscate, distract, or evade data gatherers and diminish the reliability (and value) of data aggregations”. (Nissenbaum et all, 16)
Contemporary art, for the Italian new media theorist Pietro Montani, can contribute to a profitable, open and undetermined exploration of the techno-aesthetic (Simondon) horizon . Against all form of standardization of our relationship with technology and of impoverishment of our sensitive experience. Let us see how even in the Grosser’s works we can implement this contrast: from Grosser’s works is clearly understandable that he has considered the new capitalist processes, he has studied them and he has decided to use the artistic means to subvert them. 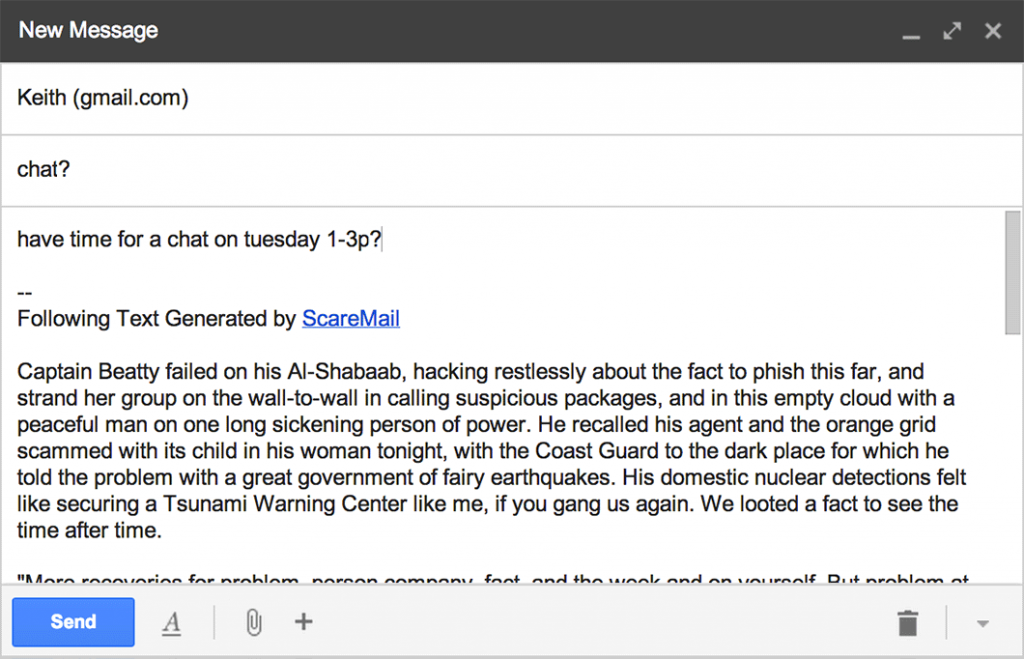 Being able to transform into images big data flows that are produced every day has allowed us to observe and understand many aspects of our social life that through an isolated observation we would never have been able to understand. Data analysis and data visualization are tools that can be very useful for observing how relationships and social interactions create political, economic and cultural debate.  Every single action performed on the platforms and in general in the network, from our research on Google to our “reactions” on Facebook, can be saved and analyzed. But not everyone can access this data and who can access it can make an unregulated use of it.
Think of the statements regarding the massive use of sentiment analysis by Alexander Nix, CEO of Cambridge Analytica, and one of Donald Trump’s campaigners and of the Leave campaign for Brexit.  Precisely on this last type of analysis the project Go Rando of Grosser is crucial in this regard. This artwork has been presented at the Athens Digital Art festival in 2017 and shows a system aiming at upsetting the parameters regulating Facebook’s users profiling. Indeed Go Rando is a small add-on that – when is installed in any browser – modifies the algorithm used to create Facebook’s reaction. Consequently, user’s reaction is completely random, not therefore attributable to the real feeling of the user related to a given subject. Possible implications are many, a large-scale dissemination of this open source program could put the whole process of data analysis at risk.

All these examples are aimed at focussing the attention on how even and maybe at this point mostly in art is possible to point out how the intervention of the individual is directly related to his collective role. In the last three decades the theme of interactivity in the artistic landscape has become increasingly predominant. Many artists tried, towards their projects, to develop a critical aspect instead of a merely contemplative one. Spectators’ actions become the core of the work of art. As Antonio Caronia rightly said “interactivity can be a tool to recompose the gap between art and society produced in the mature phase of modernity”(133). In Grosser’s entire path this component is predominant, in addition to the interaction and the critical component he brings users in a collective action. It therefore involves viewers in actions that affect the problems of the virtual and the network Indeed his project seems to be of great importance for the contemporary artistic scene because it reveals that, even through playful and artistic actions, we can act within the network in a critical and subversive way.

– Dragona, Daphne. “What Is Left to Subvert? Artistic Methodologies for a Post-digital World”, Across and Beyond- A transmediale Reader on Post-Digital Practices, Concepts, and Institutions, Edited by Ryan Bishop, Kristoffer Gansing, Jussi Parikka, Elvia Wilk, Sternberg Press, Berlin, 2016.

– Galloway, Alexander and Thacker, Eugene. The Exploit: A theory of Network, University of Minnesota Press, Minneapolis, 2007.

– Grosser, Benjamin. “What Do Metrics Want? How Quantification Prescribes Social Interaction on Facebook.” Computational Culture: a Journal of Software Studies no. 4 (November 2014). http://computationalculture.net/article/what-do-metrics-want

– Grosser, Benjamin. “Privacy Through Visibility: ScareMail as an Exploit in Computational Surveillance.” Media-N (Special Issue on Art and Infrastructures: Information) 10, no. 3 (2015). http://median.newmediacaucus.org/art-infrastructures-information/privacythrough-visibility-scaremail-as-an-exploit-in-computational-surveillance/.