The case of Landr: will AI affect music production creativity? 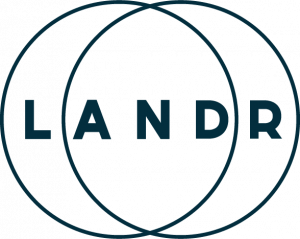 As AI-based technology has already slowly entered in many sectors of our digitally reshaped world, correspondingly it is increasingly being employed also in different fields of music production. (Fiebrink and Caramiaux, 2) The most popular of its applications is the one concerning the audio mastering process, namely the online platform Landr. Landr is the first automated audio mastering service (founded in 2014) developed by the startup company MixGenius in Montreal. It is an online tool based on machine learning by means of which audio tracks in various formats can be uploaded and then be instantaneously digitally mastered by using artificial intelligence algorithms.

Despite its still evident constraints in its performances, Landr has already attracted the attention of the music industry: since its foundation the service has already mastered more than 1.5 million tracks and in 2016 it has announced its partnership with the well known music streaming platform SoundCloud. Soundcloud users can have their audio tracks processed and optimised by Landr for free. Moreover, Warner Music Group has invested $6,2 million in Landr in the same year. (Castaldo, Canadian Business)

Audio mastering represents the final stage of audio post production and it has been always carried out by skilled mastering engineers in specialised mastering studios. The purpose of Landr is to replace those professionals by offering the same service for cheaper prices, in order to democratise the once-expensive process and to allow also non professional artists to make their tracks sound professional. As mentioned above, the possibility to save time and costs by using Landr is not only of interest to the original target market (do-it-yourself artists and small independent labels, especially in the hip hop scene), but also to major record labels (Warner Music Group), video game industry and Hollywood studios. A game or movie contains thousands of audio files which need to be quickly and efficiently mastered, for this reason those are fields where Landr could in a few years potentially replace the work of specialists. ( Stern, 2017 Symposium)

Audio mastering is as much science as it is art and Landr seems to cover more the former than the latter. And in fact, the results achieved by Landr are still not even comparable to the ones obtained by a professional mastering engineer. As many have already argued, Landr misses the “human touch“, it’s not capable of thinking out of the box and of making creative decisions. (Machkovech, Ars Technica)
But are we sure that AI cannot be creative? And if so, to what extent? Why shouldn’t Landr be able of replicating the creativity of a professional human engineer in the long term? Considering the fact that digital platforms have already radically changed the music distribution business, how are AI gonna affect the creative process of music production? How should human beings interact with them during the creative process, so they won’t be completely replaced? 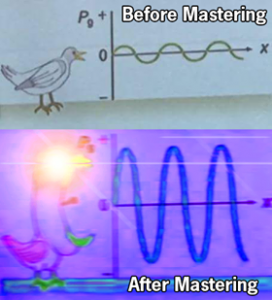 What is audio mastering?

For those who are not “audio-nerds“, audio mastering is what is meant by the last step of the audio post production process before pressing or digital distribution. The sonic source material is processed through the application of common tools such as equalisation, compression, limiting and other enhancement operations, in order to make the track sound louder, clearer, wider and more coherent. Once a song is mastered, it is ready to be released and it will meet the standards of quality and loudness of commercially released music.

How does Landr work?

After the registration, the user is immediately directed to the upload page where he has just to drag-and-drop his file. The entire process lasts a few minute and a progress bar keeps the user updated on upload status. Through wave analysis, the algorithm defines the genre or production style of the track, and applies a series of post-production operations to it based on that. Subsequently, it can be still made a comparison between the pre-master track and the mastered one before deciding whether or not to download the final product. What distinguishes Landr from other previously released software plug-ins such as Ozone (audio mastering software suite developed by the american company Izotope for untrained and unexperienced producers) is its ever-evolving nature. Indeed, thanks to its machine learning engine Landr continuously improves by collecting data from users upload and by analysing them (whether a user is satisfied enough with the mastering process to download the final track or not, for instance), so that the service is always optimised. (Lapien, XLR8R)

The lack of critical thinking is usually indicated as the main reason to explain Ai-based technology’s inability of being creative. (Mills, Dazed) For the same reason, Landr is not considered to be able to replicate the work and the decisions taken by a professional human engineer. However, mastering engineers would be not able to be creative or to think out of the box without the experience gathered through the thousands of past works: at the end of the day, it’s possible to go off the grid only when the boundaries are clear. (Boden, 22) By the same logic, why shouldn’t Landr, after the collection of millions of data, be able to go off the grid and be creative, just like the human engineer? (Boden, 349)
What Landr is still actually missing is a greater user interaction by which is possible to communicate feedbacks, as is the case in the ordinary interactions between artists and professional human engineers. Landr doesn’t give to the musician the possibility to make any specific request in order to achieve the desired result: once the track is mastered, there’s no chance to ask for any adjustment.This is a significant shortcoming within Landr, especially considering that the future of AI- based technologies in the creative process has to be found in their partnership with human beings: artists have to push the limits of those technologies, in a constant pursuit of new aesthetics and unexpected outcomes. (Jacobs, 137)

Landr seems to be only one of the first signs of the ever increasing use of AI in the music production process.  In view of this scenario, this use of AI raises several further questions concerning issues such as aesthetic evaluation and authorship ( Miranda and Wiliams, 78): how could we determine them? This new artistic partnership between human beings and artificial intelligence will not only change the way people produce music but also a lot of the thinking built up over the centuries about it.

Finally, it’s now time to see Landr in action: the electronic producer “Robots Against Children” has provided an audio mastering comparision of a short audio excerpt to show the differences between a first unmastered version, a second version mastered by Landr and then the result obtained by a professional mastering engineer.

The result is quite clear, also to the most inexperienced and untrained listeners: the “human” version sounds definitely better than that of Landr, but will the result soon change?

– Boden, Margaret A. The creative mind. Myths and mechanisms. Routlegde, 2004.