Can we deter tech monopolies and combat income inequality through a reformed open source software development? 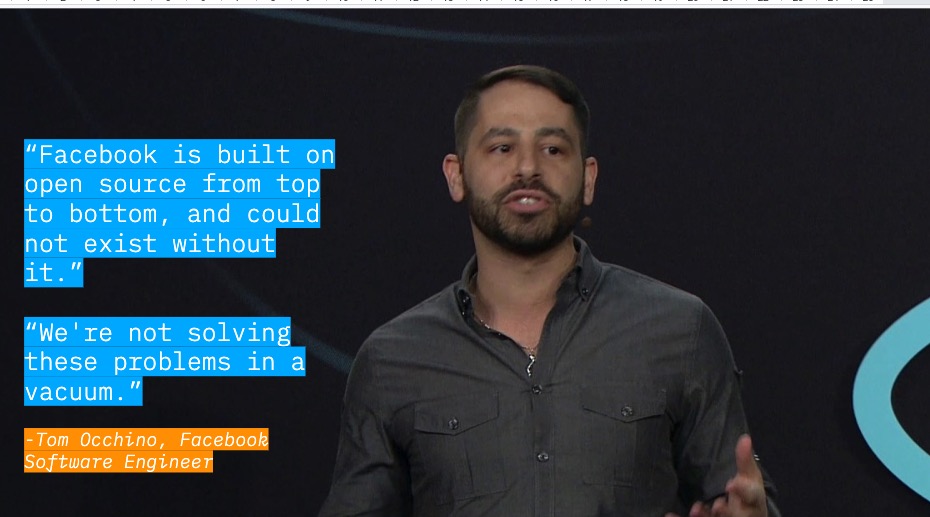 The imbalance world of software development

The foundation of the modern internet is built upon open source software. According to Nadia Eghbal’s report about the unseen labour of open source software development, more than 95% of the internet software today relies on free, public source code. This is also known as “open source” code. Viewed in this regard, the open source code is not too different from public infrastructures such as roads and bridges.

However, unlike public goods, there is currently no existing framework as to how open source software projects should be maintained. Since most open source projects rely on free labour, we argue that there is a considerable gap between the extraction of value from open source community and the support such as fundings and labour protection the community receives in return.

Major technology company such as Facebook, Amazon, and Microsoft utilise open source software for most, if not all of their technology stack. This may include source codes for programming library such as Ruby on Rails and Django, a programming language like C++, Javascript, and a web server such as Apache, Nginx, and MySQL. Through permissive licenses, tech companies are not at all obligated to pay for this code but are free to profit from it. 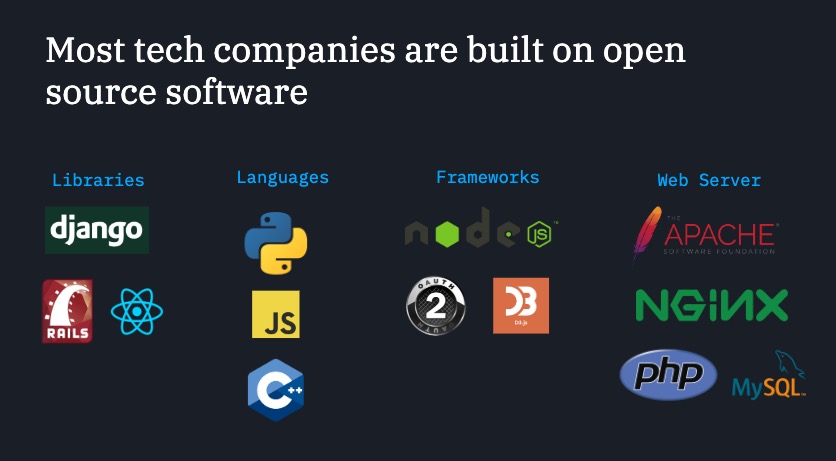 For example, Arash Payan, the creator of Appirater – a library that helps developers quickly create a notification prompt where the app user can quickly rate the quality of the app, is used by Instagram. Arash created the library in 2009 and has been maintaining the code and fixing bug requests since. He reported that he never receive any income from the project.

In this way, it could be argued that major tech monopolies extract an unproportionate amount of value from the open source community. They have built businesses that generate a vast amount of profit. The money never leaves the company or the shareholders despite the fact that much of the value they created stem from the work of free labour in the open source software community.

Open source software, contrary to its original purpose of fostering free and fair technology economy, is now being used as a mean to redistribute the wealth internally. Prior to the proliferation of open source software movement made possible by the advancement of the internet, all codes that were written to create a piece of software had to be paid for just like any other work. This means the income in the technology sector was at least distributed through various parts of the economy, resulting in less concentration of wealth.

“We have helped built the open source revolution.”

In their defence, tech monopolies pushed back against the notion that they rarely contribute to the open source community. Todd Moore, the vice president of IBM Open Technology that IBM has been contributing to open source projects since the early 1990s. In addition, he said that IBM funded every major open source foundation for the last 10 years. Likewise, Chris DiBona, director of open source at Google highlighted that Google is participating in over 2,000 projects on GitHub and has more than 1,000 programmers working on these open source projects concurrently. 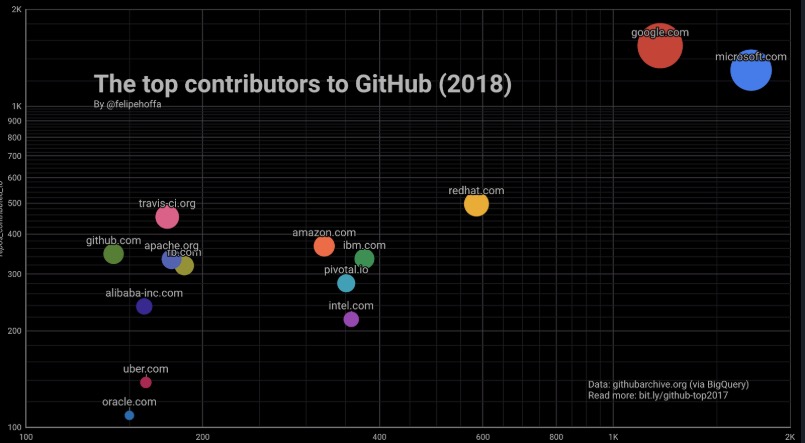 According to the data from GitHubarchive.org in 2017, Google and Microsoft are the two largest contributors in GitHub in both number of projects and the number of contributors.

Such rebut follows the line of argument in The New Spirit of Capitalism, where Chiapello and Boltanski argued that one method of capitalism to survive is to “absorbs aspects of anti-capitalists critiques into itself”, thus find new ways of legitimating itself in the eyes of the society. Indeed, through the championing of open source development narrative, tech monopolies have reshaped the public perception of open source software development in such a way that working for free is not seen negatively. Instead, it makes it desirable through the fact that those with open source development background is considered a high-value asset to the technology sector.

It is true that tech monopolies contribute to the open source community. The question is if it is enough? Jacob Kaplan-Moss, the creator of Django framework asked that if GitHub, which was sold to Microsoft for $7.5 billion last year, truly cared about the community, it should relinquish as much as half of the buyout to those ‘free labourers’ that have built and maintained GitHub in the first place.

According to the research by the Wall Street Journal, the rise of income inequality in America originates from the difference in wages between top performing firms and the rest.

And now we have some idea what's driving unequal growth in productivity of top-performing firms — it's how they build and use *their own, proprietary software and other IT/technology* 2/https://t.co/WKjcTG5JuJ pic.twitter.com/JrRstV0A6R

Notably, the top performing firms distinguished themselves through the utilisation of their own proprietary software. What was not mentioned is the fact that this proprietary software is indeed built upon the open source foundation just like how Facebook and Amazon built their technology stack. The more investment in this software, the higher the income disparity between the top performing firms and the rest. While major tech firms collected fortunes through IPO and venture capitals’ investment, less and less open source software developers are paid for their work.

A number of suggestions have been made as to how we should combat platform monopolies. This includes the use of Antitrust laws to break up monopolies, tighter tax regulations to prevent tax avoidance. Postcapitalist writers such as Nick Srincek and Paul Mason have pushed for even more drastic measures such as public ownership of technology platforms. In principle, the public platforms might be easier to monitor and to account for. Nevertheless, it is not a realistic approach in the existing capitalist economic environment. Furthermore, laws such as Antitrust show how technological advancement has far outpaced government regulation on business. The Antitrust laws hinge on the fact that the act of monopoly must severely affect the wellbeing of the consumers. On the contrary, it is apparent that most platform users love these platforms. This is reflected through Amazon, Facebook, Google’ millions of daily active users. 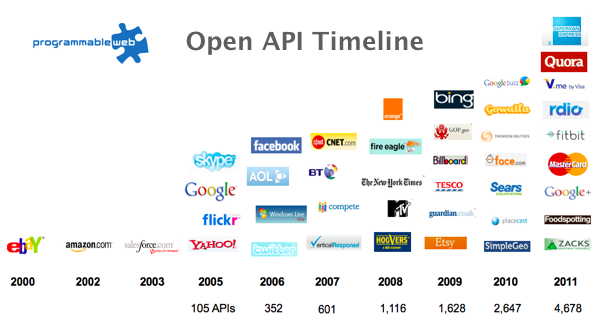 We propose a government-led approach to reduce the unfairness in open source software development. We argue that by changing how the technology stack is being created, it could help deter the creation of tech monopoly and the income inequality in the existing economy from within. We pose the question:

“Open source software provides the tools to both build tech monopolies as well as level the playing field. What are some measures that could prove helpful in fighting back against tech giants, using the same open source principles they were built upon?”

Unlike antitrust laws which seek to breakup a large monopoly, these alternative solutions offer ways in which a monopoly could be deterred from within. Enforcing these suggestions would limit the monopolisation of resources, producing a fair and equitable technology world. It would increase investment in open source community that could benefit everyone.

Oberhaus, D. (2019). “The Internet was built on the free labour of open source developers. Is it sustainable?” https://www.vice.com/en_in/article/43zak3/the-internet-was-built-on-the-free-labor-of-open-source-developers-is-that-sustainable