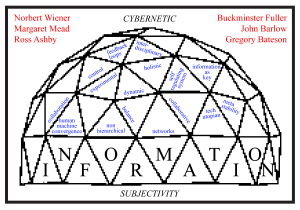 The image above attempts to illustrate some of the core elements of what we could call ‘cybernetic subjectivity,’ that is, how the process of ‘subjectification’ might occur within a cybernetic framework. Here, we refer to Michel Foucault’s idea of subjectification as a situated and contingent form of subjectivity produced by discourses and the power relations attached to them. The image features a schematic of a geodesic dome with the key concepts of cybernetics imagined as individual components in the dome. The geodesic dome was designed by architect and systems theorist Buckminster Fuller, who was associated with cybernetics. The names seen in red in the image are those of other prominent cyberneticians, including Norbert Wiener, Ross Ashby, and Margaret Mead. The dome is the architectural manifestation of a non-hierarchical system in which each individual component cannot stand on its own, but is functional and stable as a part of the whole dome structure.

Cybernetics emerged out of the interdisciplinary research environments in the United States during World War II, which brought together the productive forces and research capacities of both the university and the military to create new technologies to be used in the war. Cybernetics imagined humans, animals, and machines, as belonging to intricate systems that regulated themselves through feedback loops. These feedback loops were based on the exchange of information between the parts of the system, making information the key to the functioning of any system. The importance of information within a cybernetic subjectivity is emphasized in the visualization through the way that information helps provide a kind of “structure” for the rest of the dome.  From this point, the dome is made up of other key themes within cybernetic discourse that could be seen to be constitutive of a ‘cybernetic subjectivity’ in equal measure, just like the components of Fuller’s geodesic dome contribute equally to the whole. While cybernetics as a discipline might not have a direct corollary in the present, the collaborative and networked exchanges of the cyberneticians and the emphasis on non-hierarchical information exchange have clear resonances with the logic of social media platforms today.