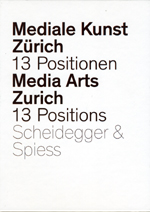 “Hi! This is the autonomous Opera Telephone of the City of Zurich. For your pleasure and entertainment, we have placed a bug in the Zurich Opera House. In a few seconds you will be connected live to the Opera House. You can lay back and listen to today’s performance of «Der Rosenkavalier» by Richard Strauss from the comfort of your living room.”1 Between March and May 2007, thousands of Zurich’s residents were randomly selected and called as part of the Opera Calling (2007) project realised by !Mediengruppe Bitnik and Sven König which, by experimentally using the telephone as its medium, shows the artistic potential of “hacking” a complex system to generate surprising new situations.

Opera Calling forms position number 10 of a total of 13 experimental contemporary art projects compiled in the book Media Arts Zurich: 13 Positions from the New Media Program by Chrisitian Hübler, Nils Röller, Felix Stalder and Yvonne Wilhelm, which offers an interesting insight into the international Swiss media art scene from the past decade. Media Arts Zurich, the third yearbook published by the Department of Art & Media at the newly founded Zurich University of the Arts, examines the varying approaches, techniques and strategies of the latest generation of media artists, which by using the expansion of media art in ubiquitous everyday life ways, offer references to the so-called post medium condition of the contemporary media art. As Inke Arns in her Media Arts Zurich’s introduction ‘On Contemporaneity: The media arts in the age of their post-medium condition’ puts in: ‘Media have become, in short, a constitutive part of the world surrounding us, and are therefore constitutive for our behaviour in this world’.2 The 13 positions of Media Arts Zurich illustrate, in this context, the way in which both new and classical media (like the telephone in Opera Calling) collide within the cultural Swiss environment to motivate in the audiences an awareness of the impact of the post-medium condition by making visible the ubiquitous presence of new technologies on society at large.

Marc Lee’s Breaking the News (2006-2007), holding position 03, in which an interface enables us to use current news from global news channels as raw material for a personal video and sound mix, forms an example of art employed by its users to manipulate and personalize mass media. In the same line of using technologies in order to develop a sense of media awareness in society Andalus Liniger’s Limbo Life (2007), position 05, experiments with a travel agency which provides tours exploring the daily lives of illegal residents illustrating the experience of unstable and unclear participatory situations that these people encounter and which is usually mediated as a fixed reality in the media. Markus von Glasenapp’s Fuelbrush (2007), position 06, criticizes in the same way energy consumption and its relation to the advertising scene by exaggerating the energy use of a toothbrush running on gasoline. Position 08, eRiceCooker (2007) of Annina Rüst creates an “awareness tool” as well for issues relating to the electronic aspects of our lives by tracking Internet news about genetically modified rice in order to feed small portions of genetically modified dry rice into a rice cooker. In short, it is the amplified understanding of the media through the awareness of the technological process of the media itself, which forms the premise of the 13 positions exposed by Media Arts Zurich. In this sense, the projects compiled in this book resemble Julian Bleecker’s insights about ‘The Internet of Things’ and views on blogjects that provide networked social discourses by tracing its locative status in both physical and virtual spaces (as Mark Tuters and Kazys Varnelis in Locative Media propose). As argued by Bleecker this can induce critical conversations in media (as in Internet forums) around topics that have relevance, for instance, in the ecological scene (see for example Beatriz da Costa’s project ‘Pigeon that Blogs’ or Ieva Auzine and Esther Polak’s MILK project). Media Arts Zurich illustrates that this relevance of our awareness about our position in relation to the media that we use can be pushed to extreme ironic situations escaping from real usages of technologies, but at the same time showing the real possibilities of technologies. In this way, beyond reflecting on diverse contemporary issues in relation to media and society, Media Arts Zurich’s positions can be seen as an artistic calling aimed, like opera, to have ‘a pleasant evening […] and a flawless listening [and viewing] experience’.3