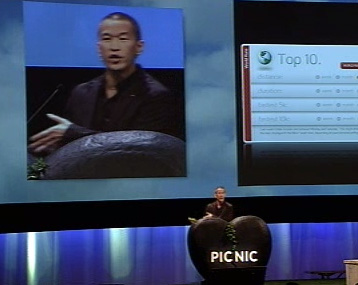 Michael Tchao is the General Manager of Nike Techlab, a sports technology innovation group within Nike. Today at Picnic he presented Nike+ to show a few examples of how social and commercial networks interact. You may have heard of Nike+ in the past, they began the line in 2006 with the Nike+iPod campaign and now have expanded it to include Nike+Sportsband (“for those who don’t run with music”).

What can you do with Nike+? Basically Nike+ started to help the runner track distance, elapsed time and calories burnt during the run. A fancy pedometer you say? Well, Tchao explains how over the past two years Nike customers have been using this data to create a community of runners online. Nike hopes to use this product to “motivate” a new generation of runners (and of course to sell shoes).

Tchao shows a brief history of Nike’s efforts over the years that combine running with digital technology, admitting that his team really needed to “rethink running”. He has an example of the “classic advertisement” for how we traditionally think of running: one man running on the long open road. But Nike+ (much like everything 2.0) wants to make running more social: “to give runners the feeling that they are part of something bigger, a group”.

Nike+ runners take their running data from the shoe to the web where they can also set goals, track progress and create an online history or runs. I’m not a runner myself, but I have to admit that Tchao’s demonstration of the interactive site – shiny graphs and bubbly displays – does kind of make running look fun (if such a thing is possible). And this is exactly what Tchao is hoping for: people like me who need extra motivation to run.

The social aspect of this comes in through “online challenges”. Tchao gives the example of a group of friends setting up a race: “First to hit 100 miles gets get free lunch”. The biggest “online challenge” was a 26 city race that Nike held this past summer called The Nike+ Human Race 10k. On this one day, Nike+ runners around the world competed in the same 10k race by comparing data from each runner’s Nike+ shoes.

Tchao’s presentation felt like a long Nike advertisement, and he really didn’t give the Picnic audience much more than what is already on the Nike+ site (but, then that is what I’ve come to expect from most speakers here at Picnic). What is interesting about “connecting shoes” is that it brings us one step further into  augmented space. Networking is clearly moving beyond our laptops and mobile phones, striking “intellegence” into something as rudemenetry as a running shoe. Rafi Haladijian, who spoke directly after Tchao, has the motto “First connect rabbits, then connect everything else” (refering to his adventure in networking through toy rabbits). Haladijian spoke about how we can look forward to connecting the other 700,000 material objects in our lives – from keys to a loaf of bread. I see Tchao’s Nike+ team as an innovator for 1 of the other 700,000+ products that are yet to be connected. If Nike+ running shoes are a financial success, then it might not be long before Nike Techlabs started “rethinking” other athletic products: digital tennis rackets? or maybe a high-tech swim suit?