‘The accident of where one is born is just that, an accident; any human being might have been born in any nation.’1

With these words Martha Nussbaum emphasized back in 1994 the importance of replacing notions of patriotism by notions of cosmopolitanism in order to not have a primary allegiance to a particular nation, but to ‘the community of human beings in the entire world’.2  But what happens when, by means of social network sites (SNS), new kinds of loyalties are made and diversified around the world, which are created and refined not ‘by accident’, but deliberately and consciously? What about the implications of supporting SNS with the impetus and energy as if we were members of a particular nation? Do SNS imply new insights into the way diversified global (or local) communities (off-line or on-line) can be connected or do they represent the digital signature of the individualized encapsulation of on-line ‘imagined worlds’ and are therefore not bringing people together (in the sense of a really cosmopolitan bricolage), but bringing some chosen people together?

Frequently the goal of SNS is to share off-line connections between individuals instead of meeting strangers. As danah m. boyd and Nicole B. Ellison describe: ‘on many of the large SNSs, participants are not necessarily “networking” or looking to meet new people; instead, they are primarily communicating with people who are already a part of their extended social network’.3  This means that SNS initially attract homogeneous populations ‘[…] so it is not uncommon to find groups using sites to segregate themselves by nationality, age, educational level, or other factors that typically segment society’ as boyd and Ellison point out.4  In this sense, even though SNS could deliver (from a sociologist academic perspective, for example) deep explorations and interesting new insights into how certain communities (e.g. teens) are built and how they behave, the sense of the development of individualized on-line communities by SNS across users should not be underestimated. A sense of individualized social integration (from user’s perspective of societies’ selection) that might run parallel to Benedict Anderson’s ‘imagined communities’, which, just like nations, depend on sovereignty and on ‘the style in which they are imagined.’5

By this I do not mean that SNSs are rigid and structurally hierarchical as nations are mostly seen, but they are limited in the sense that even though users (could) never know much of their fellow members, hardly ever meet them, or even hear of them, it is the image of their specific communion (sharing music, photos, chats, etc.) what is still present in their minds (imagined).6 Of course the big difference (like I mentioned in the first quote) of Anderson’s imagined communities (nations) is that SNS are deliberately chosen by the individuals (instead of the latter being accidentally involved in a particular network site). As boyd and Ellison further point out: ‘social network sites are structured as personal (or “egocentric”) networks, with the individual at the center of their own community.’7 This implies an individualistic development in experiencing an exhaustive number of possible environments in which one can constantly join the creation and re-creation of on-line imagined communities (SNS), but it also raises questions about the implications of what these diasporic involvements with imagined on-line worlds could mean for the users.

For example, to what extent can switching worlds stimulate a phenomenon close to the cultural schizophrenia (in this case on-line), in which users could experience dissonance (in cognitive or emotional ways) when they realize that the ways they present themselves to these worlds (e.g. personal description, representations, etc.) are not always compatible with the ‘real’ world and/or differ between several on-line worlds (as the cultural identity dissonance experienced by expats when integrating in a different nation). Something close to comparing one’s personal presentation from on-line popular imagined worlds such as Facebook or Hyves to a profile made and behaviour performed on business sites such as LinkedIn or Plaxo (see post ‘Hyves’ and ‘LinkedIn’. My Schizo-life).

Websites such as swurl.com (see post What can we do with Swurl?) can make this involvement in imagined communities (SNS) explicitly present to the user’s eye, and in doing so increase an awareness of one’s own proliferation of SNS’s sovereignties. But this awareness can also be explored by visualizing networks and the way we penetrate and expand our digital identities through this new kind of geographically boundaryless nations-like social network sites. Selecting an SNS should not always be preceded by a pre-definition of an on-line identity status (searching for an identification to a particular SNS), as one can also randomly explore and establish a certain selection. In this manner explorations are prompted by accident, depending on where one is surfing; and therefore identity constitution meaning just that, an accident. 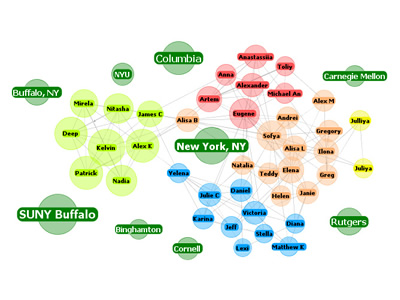 In the tradition of creating useful and engaging network visualization tools for various systems such as Amazon and Google, TouchGraph is now leveraging the power of the booming Facebook platform with its new TouchGraph Facebook Browser. The tool allows users to see how their friends are connected, and who has the most photos together. Users can also explore their own personal networks by graphing photos from anyone’s album, or view the connections between members of a group. 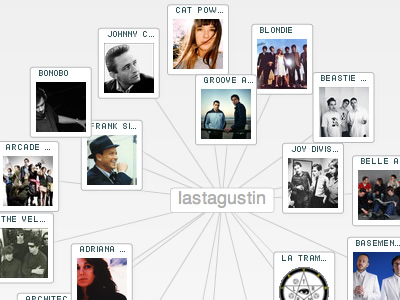 Using the lastFM API and the SpringGraph Flex component, this Flex application shows the relationships between music tastes of different lastFM users. You can either see pre- populated graphs of lastFM users, or search for any other user. The search feature works well, as you can keep on looking for your friends and comparing your closeness when it     comes to music taste. 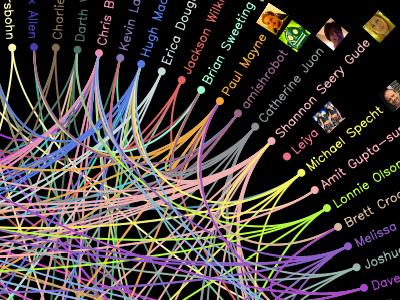 TweetWheel is a simple tool that allows an immediate visual representation of one’s Twitter network. Users can either go to the site and input their Twitter ID, or type directly intot he browser: “www.tweetwheel.com/yourTwitterID”. The tool then renders the user’s entire twitter network, and inner links, into a Radial Convergence layout.

See also:
==>    The imagined business community of they rule
==>    And the imagined terrorist networks of orgnet.com