A good chance that while browsing through the endless database of Twitter one could come across a line like this: “I have forgotten my umbrella”…in fact you will. 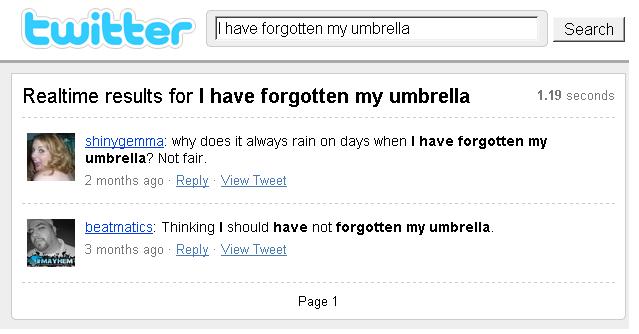 The expression of mundane or day to day activities and thoughts like these is where Twitter was specifically designed for. No “accidental” constraints of characters like SMS, no abbreviated snippets like Google Search or RSS feeds, but the intentional constraining of character input and direct publishing of brief statements, thoughts, morals or otherwise short articulations of textual brainfarts into a grand network of other publications, in other words, the post-modern version of the aphorism…the microblog.

The sentence “I have forgotten my umbrella” or rather “ich habe meinen Regenschirm vergessen”, is also found in the publications of notebooks used by Friedrich Nietzsche during his life. The anology between Nietzsche and Twitter goes beyond just a phrase found in his notebooks as a lot of his books are written aphoristically and he has written a great deal on the use if this “style”. To make a humble effort to simplify his ideas about the aphorism (if possible) one could say it frees the writer from the constraints of the context of a large exhaustive work and the burden of the authorship and enables the reader to better reflect on that what is written, to give room for interpretation. For Nietzsche it is an honest form of writing as he explains:

“If being honest means, more than anything, being honest about one’s own intellectual development, the aphorism is the perfect vehicle. For it demands that its author renew himself with each new addition, and allows for the growth of the reader. It also allows adherents to revisit the old aphorisms without the danger of forsaking the teacher”.(Nietzsche, Human, All-Too-Human)

When relating Twitter to Nietzsche (or vise versa) one could say the intended audience cannot be compared, where most readers of Nietzsche will look for philosophical insight (or rather insight into the philosophical), in Twitter the average reader is a follower, not seeking any deep insight, getting glimpses of other peoples day to day activities and thoughts. Nietzsche however did not intend to write for the philosophers of the future, even the mediocre mind could grasp phrases of the text without a full comprehension of the complete writing. He calls his writing fishhooks in his book ‘Ecco Homo’ and by using the aphorism his intention is to get as much fish on his hook as possible.

Whether the tweets in Twitter are meaningful or not is open for debate, I believe however that the articulations are honest, they are fragments of life and the reader will not be trapped inside a pre-given set or structure, it has been freed from its context. The master himselve might have enjoyed twittering as he states ‘I intend never again to read an author of whom it is apparent that he wanted to produce a book: but only those whose thoughts unintentionally became a book’. He is not interested in sublime skills or problem free writing and believes in building blocks which can also be “disposed” of when needed, he writes ‘Posterity discovers it in the bricks with which he built and which are then often used again for better building: in the fact, that is to say, that that building can be destroyed and nonetheless possess value as material’.

And in bricks we trust, said O’Reilly to his good friend Dougherty. It is in this building blocks, this web 2.0 construction site, where I come back to the forgotten umbrella. The sentence was not lost in the sidelines of Nietzsche’s notebooks as it has been included into the notebook publications (by his daughter) and noticed by another great philosopher, Jacque Derrida. Although Derrida refers to it as an umbrella which no one can use, his own use of it makes it useful. It shows that context has multiple levels. Whether or not aphorisms might free the text from its context, it is ultimately bound by another context, that of the Author, in this case Nietzsche. The mere fact of his authorship made it useful for Derrida and the mere fact of the authorship of Derrida made it useful for me.

In Twitter the text is in some way freed from this authorship, not on the level of the tweeds as they are cursed with the handles of the users, but on the level of the database. Twitter’s search functionality and its open API make it accessible to anyone who want to free it from its author. The context which makes it useful thus is the meta-author, the Twitter application. Aphorisms as buildingblocks of honest articulation which can create authorless and egoless poems enabling society, a thing which according to Nietzsche has been destroyed by Socrates and Plato in their ‘promotion of reason as one true panacea pushing music, poetry and drama to the background as entertainments, dangerous if regarded as more than artisan skills’. It is a database of thoughts, stripped of thinking. Nietzsche explains that ‘most thinkers write badly because they communicate to us not only their thoughts but also the thinking of their thoughts‘, and Twitter is just that, thoughts without its thinking.

What would happen if one would use the Twitter API to construct narratives like Jonathan Harris did in his “We Feel Fine” project, scraping the webs footprints, telling the Webs Secret Stories, displaying the need for expressing our feelings seen by Harris as binding us as humans. More and more Mashup tools are being written which uses Twitter as dataset and can result in unforeseen beauty or insight.

Reading through the rich text of Nietzsche, the deconstruction of Derrida and Steven Michaels analysis of Nietzsche’s aphoristic turn I have tried to relate their thoughts to the contemporary web in the form of Twitter. It has been an exploratory journey and invite people to read through the texts to make a journey of their own.