From compression artifact to filter

An archeology of a compression filter.
A couple of months ago I was approached by a company that asked me for my knowledge on glitch and compression artifacts. They were especially interested in recreating bleeding pixels. I recognized their ideas in the work of Sven Konig and send them to his website (on which in 2005 already, Sven published a script that can be used to create such artifacts). Later the company send me an email that said they unfortunately cancelled their project.
I made my own video though, and send it to Goto80, but in the end we also decided it seemed boring to just reuse a technique developed by somebody else – because it feels no longer as an experiment.
I kept track of the bleeding pixel effect and noticed its growing popularity, especially over the last few weeks. This lead me to write a small archeology of this particular compression artifact.

The bleeding pixel effect (or datamoshing) is located in a realm where compression artifacts and glitch artifacts intertwine. The artifacts caused by compression are stable, although unpredictable. Therefore, technically, they are not a glitch because the method is reproducible. They are however often perceived as a glitch (an error). The bleeding effect relies on deleting the information within one frame per 25 (more or less, depending on the frame rate) in a divx or xvid video.
I think the most interesting thing about using this effect is that it shows the materiality of digital film by translating the grain of the celloid into the digital pixel.
Here is a timeline. I know there are more works out there, but these works seem (for different reasons) more important or referenced too. 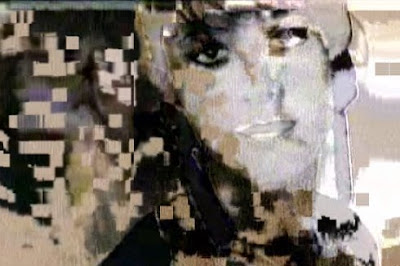 In 2007 Sven and Bitnik collaborative project Download Finished saw the light of day. Download Finished is a website that “transforms and re-publishes films from p2p networks and online archives. in Downloaf Finished, found footage becomes the rough material for the transformation machine, which translates the underlying data structure of the films onto the surface of the screen. the original images dissolve into pixels, thus making the hidden data structure visible. through Download Finished, file sharers become authors by re-interpreting their most beloved films.” 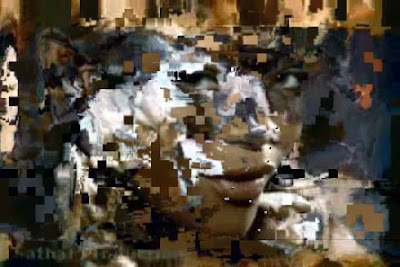 Since the release of the last three videos (by O’reilly, Chairlift and Kanye), there has been a lot of back-and-forth comment-talk on who was the first to use this effect. The Kanye video will not even be released because “there is another video out there using the same effect”. Even so, most of the video makes seem to be quite nice to me and didn’t get me tired of the effect yet.

Rosa Menkman
Abandoned compression video project, 2009
Made with the help of Download Finished

I think it is only a matter of time before we will see that this artifact is developped into an browser script, like we have seen with much praised image-glitch plugins and browsers like glitchbrowser (2005/2008) developed by dimitre, ant scott, iman moradi.
Then this enchanting artifact will be changed into just another default preset or cultivation.