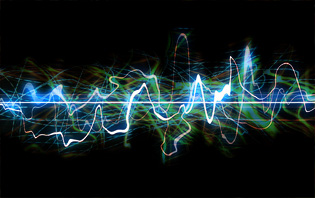 As digital audio files continue to flow freely on the Internet, music itself mimics certain inherent characteristics of the web best understood through Gilles Deleuze and Felix Guattari’s (D&G) rhizome metaphor. In A Thousand Plateaus, D&G introduce the concept of a “rhizome” to describe a representative model that extends in all directions and has multiple entryways; since then it has most commonly been used as a metaphor to represent the Internet. Understanding digital music as rhizomatic is important because it interprets the transformations of the digital music culture as a natural progression towards rhizomatic qualities – and provides us with an insight into what might be the future of “the music industry”.

A few of the defining characteristics of the rhizome are connectivity, heterogeneity, multiplicity and cartography. Music can be understood as rhizomatic when its characteristics mimic those of the rhizome; thus music becomes more rhizomatic when those characteristics are amplified. According to D&G, any point of a rhizome “can and must be connected to anything other”. So we might think of anything that blocks connectivity as a contributing factor in making something less rhizomatic. Firewalls and 404-errors are just two examples of obstacles that fulfill this role. Digital music is also subject to a large set of infringing obstacles, some of which include DRM, other restrictions due to copyright laws, and pay-only access for downloads. As we see these barriers disappear, we also see digital music becoming more rhizomatic.

While highlighting the defining characteristics of the rhizome…
I’ve suggested 5 examples illustrating how music has become more rhizomatic:

Over the past few years we’ve seen music search engines like seeqpod and skreemr increase our level of connectivity to music. These sites crawl the web for music and provide links to the MP3s they find. Songza is a music search engine that goes as far as to search YouTube and strip out the audio tracks from uploaded videos. Music search engines look for data already present on the network and create new lines of access. If we think of the Internet as a large map, then by uploading music to the web we extend the map; and by using music search engines we create more connectivity. And because on the web music is “unbundled” from the album, we are free to connect directly to the music that interests us the most and ignore everything else.

The price of music continues to approach zero. This theory is supported by Michael Arrington in his post “The Inevitable March of Recorded Music Towards Free”, as well as by Seth Godin, British economist Will Page and myself on musicNeutral (to name a few). As music moves towards free, the pay-to-download price barrier is eroded, fostering greater connectivity between users and musicians.

3) The Persistence of File Sharing

The persistence of file sharing spreads more music around the web, thereby extending the territory of the rhizome. According to D&G: “a rhizome may be broken, shattered at a given spot, but it will start up again on one of its old lines, or on new lines. You can never get rid of ants because they form an animal rhizome that can rebound time and again after most of it has been destroyed.” This trait is defined as “asignifying ruptures”, and it is exemplified in the persistence of music file-sharing sites. When one file-sharing site is shut down, two more turn up to replace it. The RIAA may have helped shut down popular music file sharing sites like Napster and Oink, but ultimately they can’t shut down P2P and BitTorrent technology.

The characteristic of cartography is also present in the spread of music files online. We can draw a parallel of music “leaking” on the Internet to D&G’s depiction of the rhizome plant: “Go first to your old plant and watch carefully the watercourse made by the rain. By now the rain must have carried the seeds far away. Watch the crevices made by the runoff, and from them determine the direction of the flow. Then find the plant that is growing at the farthest point from your plant. All the devil’s weed plants that are growing in between are yours.” The most recent example of this phenomena is with the new U2 album No Line On The Horizon: it was mistakenly available for download on the Universal Australia site two weeks before release and since has spread around the Internet (for example, here on the pirate bay).

D&G in their description of the rhizome state that “Music has always sent out lines of flight” and it is because of these “ruptures and proliferations “ that the musical form is “comparable to a weed, a rhizome”. The “lines of flight” may refer to the fact that a song can never be re-played exactly the same by a musician (e.g., no matter how minuscule, there will always be some variation in tempo or timbre), but in addition the lines of flight also encompass all of the derivatives. ‘Remix culture‘ is closely associated with DJs that cut-up, rearrange and sample music tracks, but it also extends to the many derivative works sung by amateurs on sites like YouTube. Remix culture thus expresses the rhizomatic qualities of heterogeneity as well as multiplicity*.

The open-source music player Songbird allows you to browse the web for MP3s and download music to your local library. The remarkable thing about Songbird is the set of add-ons that instantly connect your music to relevant data called from around the web. Within the Songbird interface you can match upcoming concerts, lyrics, photos and reviews to the tracks you are listening to. Songbird’s add-ons facilitate direct connectivity and re-use of data that–in comparison–frames iTunes as a music prison.

In conclusion…the interesting thing about these five examples is that they’ve all emerged within only the past decade. Looking forward to the next ten years, musicians should embrace trends that support connectivity, heterogeneity and multiplicities if they want to stay ahead of the evolutionary curve of digital music, which in my opinion means supporting initiatives like Creative Commons and the free culture movement. Evidence has shown that digital music follows the path of least resistance – and ultimately it strives to be more like the rhizome.

*multiplicity includes not only the multiple, but also the variations of the original