Some people get very nervous using Twitter; they find the constant stream of (seemingly) unimportant personal exclamations incredibly annoying. They say: how on Earth are you supposed to keep track of all that information? Well, those people should try using TweetDeck, a desktop application meant to organise your Twitter activities. If you think regular is Twitter a lot of information to deal with, TweetDeck is on a completely different plane altogether.

I am involved in the online campaign of the Dutch left-liberal party D66 for the elections for the European Parliament in June. I use TweetDeck to keep track of all the Twitter users affilliated with our party, to skim their tweets for interesting points, and generally keep the dialogue going with our supporters. See the screenshot below for an idea of how this works. Imagine having to filter all these tweets, then retweeting, dealing with direct messages…

Using TweetDeck is like having the “hive mind” of the Borg on Star Trek. The Borg are an alien species who form a perfect network: each individual Borg drone is connected to “the hive” which shares all the information known to each individual. Kill one node in the network and other nodes take over. In fact, the Borg are a direct reflection of the model of the original Internet, ARPAnet: the US defence network designed to be impervious to Soviet attacks because the information contained in one network node was shared with all other nodes.

Anyway, using TweetDeck feels a little like tapping into the consciousness of dozens of people. On work days, I can use TweetDeck and get an idea of what each of our candidates for the European Parliament is doing that day, because they tweet so often what they are doing. Of course, they only tweet what they want other people to know, but still.

Of course not all tweets are relevant. There is a lot of tweeting “noise” that is irrelevant to me. Using TweetDeck is an easy way to get information overload, a phenomenon that is apparently so prevalent now that it has its own research group: http://www.iorgforum.org/. Some people might feel that using TweetDeck is more like navigating an Internet galaxy full of unconnected bits of information. Or they may feel like Danny in Kubrick’s The Shining, navigating the endless maze of corridors of the Overlook Hotel that ultimately goes nowhere and leads you back right where you started. Well, unless you meet someone screaming “red rum”, that is.

TweetDeck is not for people who do not like handling large amounts of information simultaneously. However, if you have to navigate a large body of simultaneously published information, it can be extremely useful.

Happy Easter everyone! And don’t forget to check http://www.twitter.com/d66. Keep up the good work here at MoM. 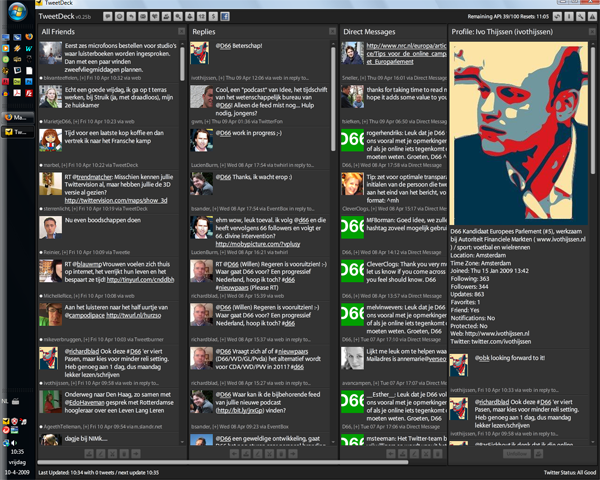