About Hania Piotrowska
My New Media interest grew out of studying Media Studies and Marketing during my undergraduate education at Maastricht University. After obtaining my Bachelor's degree I took a year off to work at a Public Relations company in Warsaw, Poland. This is where I had a possibility to Media Studies with Marketing, as the company's PR projects were executed mostly online. Using Internet platforms like blogs, Facebook, flicker and such to create a company's image was a really interesting experience and I think I'd like to further explore possibilities of combining New Media with marketing.

UBERMORGEN.COM might be always trying to combine some nice entertainment with very intellectual European subversive art, but God Christ, we need to relax sometime and sell Google ad space on eBay and write a book about it and sell that on Amazon and twitter everybody about it and be totally modern, postmodern and lostmodern (1).

The book UBERMORGEN.COM is a two-part art catalogue documenting all of the projects conducted by Hans Bernhard and lizvlx, founders and main activists of the UBERMORGEN.COM group. Vastly illustrated and providing much informative material, the book is an excellent read.

After examining the projects carried out by UBERMORGEN.COM readers should not be at all surprised to find: psychological complexity (bipolar disorder syndrome), videogames of the 80’s, use of recreational/medical drugs and interpretation of the screen as an infinite space amongst Bernhard’s main influences. The art duo seems to be taking their audience on a psychodelic trip into the altered reality of digital present and digital fantasy future, and we’re all in for a ride.

You might recognize Hans Bernhard (YouTube channel/blog) as the historic net art pioneer who was involved with the legendary group etoy (2). The anti-corporate rhetoric of etoy can be seen reflected in the nature of UBERMORGEN.COM’s projects. They can be described as dystopian, as no redeeming light can be seen on the horizon of their undertakings and most of them have an anarchist feel. Corporative methods and propaganda are systematically adopted and deconstructed, as UBERMORGEN.COM create mostly politically intertwined art. However, they don’t engage in a dialogue, rather simply throwing statements at confused audience („[…] all of UBERMORGEN.COM’s work […] offers no answers, just raises questions“ (3). I suppose this is what makes them artists, as opposed to political activists.

The most powerful art project ([V]ote-Auction) cost the collective 70.000 Euro in legal fees and a ban to ever enter the territory of the United States. What is especially impressive of UBERMORGEN.COM’s debut work is that it caused enough panic for CNN to broadcast a half hour programme on the project.

You can watch the video here.

Set-up just before the US presidential elections, the website http://www.voteauction.com declared its desire to „bring capitalism and democracy closer“ by enabling American citizens to sell their votes to whoever would like to pay the most. The site further explained: „Voteauction.com […] is now owned by an Austrian holding company that has invested in many of America’s new, emerging industries. We feel that the American Election Industry provides unique new opportunities for the foreign investor. We purchased voteauction.com in order to investigate the profit-making potential of the American Election Industry“ (4). Media outburst caused UBERMORGEN.COM to answer an average of 30 telephone and 15 email interviews per day.

In reality it was indeed solely an art project and not a business endeavour. All statistical data (e.g. price per vote) was phony and no one could actually buy or sell their votes. The website was designed more as an aesthetic forum for rethinking democracy rather than anything else. UBERMORGEN.COM refused to engage in a political dialogue condemning or protesting against political art or activism.

Asked by CNN reporter Van Sustern about the difference between lobbying politicians and selling votes, William Wood, Chief Counsel of state of California, said „It’s absolutely different because it’s fundamentally different“. This thought inspired UBERMORGEN.COM to use as their slogan for [V]ote-Auction.

Alessandro Ludovico, a media critic and editor in chief of the highly respected Neural magazine, provides the readers with a very interesting Introduction to the main book of the set. He states that:

„Most of UBERMORGEN.COM’s installations show something plausible, tangible and perfectly (dys)functional, which has apparently been (unlawfully) appropriated from a future that is just around the corner. These objects are not really prototypes, but complex abstractions that seem to have arrived ahead of their time in their social and/or economic setting. UBERMORGEN’s anomaly is here to make a difference in how we perceive „reality“ – now and at least until the day after tomorrow“ (5) (UBERMORGEN meaning tomorrow or the day after tomorrow in German).

I believe that this is a very good observation. Projects described in this book are too plentiful to be all discussed in detail but let’s take a look at a few of those (dys)functional installations.

Generator Tetralogy projects were mostly inspired by the legal outburst accompanying the [V]ote-Auction project: domains being shut down, legal fees to be paid and a lot of legal correspondence being sent by email.

All of the four generators create [f]originals (forged originals) – prescriptions (Psych | OS Generator), court orders (IP NIC – Injunction Generator), bank statements (BANKSTATEMENTGENERATOR), and torture protocols (Superenhanced Generator). The term [f]original is used to describe „any document or legal paper that in the narrow sense of the word is not an original any more, as it has been generated by a machine (…) and is „valid without a signature“. (…) [F]originals claim authenticity but on closer inspection they turn out to be the product of „consensual hallucination“) (6). Again, the generators leave the audience with no commentary but we can already deduce what the artists are trying to tell us. They came up with a creative reaction to running into a lot of legal and financial inconveniences during the [V]ote-Auction project. Even though emailed documents aren’t legally considered official UBERMORGEN.COM had to bear the burden of consequences. As a response they created a series of generators to forge different types of documents usually issued only by professionals, just as in their opinion emailed documents are forgery. 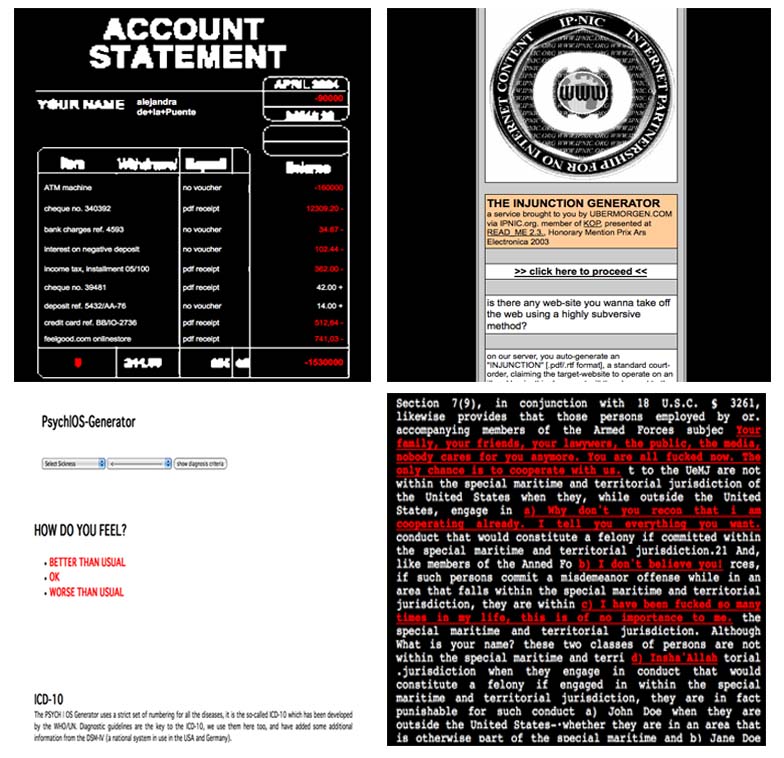 The trilogy deals with e-commerce and uses the dialectics of Google (GWEI – Google Will Eat Itself), Amazon (Amazon Noir – The Big Book Crime) and eBay (The Sound of eBay). Allegedly admiring and being attracted to those websites, UBERMORGEN.COM (ab)use them in very interesting ways.

GWEI – Google Will Eat Itself project uses the AdSense mechanism. Every time a user clicks on one of the GWEI-networked sites, UBERMORGEN.COM receive money from Google. Then, they use to money to buy shares of Google itself. It is estimated that it will take 202.345.117 years

Amazon Noir – The Big Book Crime uses the „Search Inside the Book“ mechanism to decode the full content of a book. A sophisticated robot-perversion-technology accesses the books using different identities, copies contents of each page and reassembles the book automatically into a single PDF file. Then the book is shared through peer-to-peer networks. 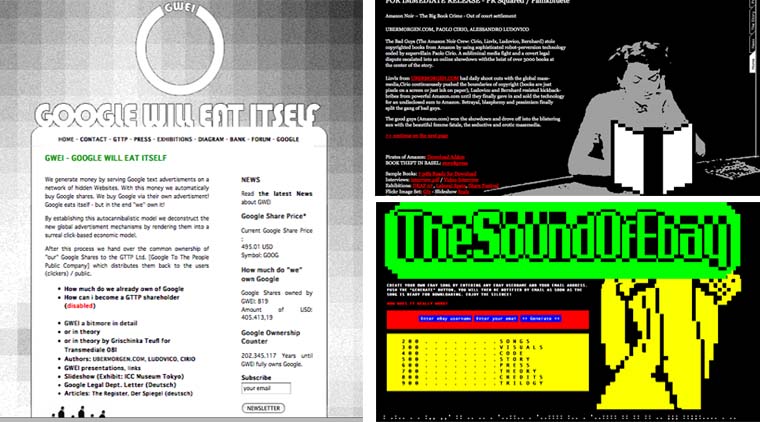 I would most definitely recommend this book to anyone interested in digital media art, especially if the person leans slightly towards anti-consumerism or maybe even anarchism. Plenty more projects are described in the book and weren’t mentioned in this article. I would definitely say that if not of very high artistic value, they surely are interesting to read about and can provide substantial amount of entertainment, if only to those with indiscriminate taste. I enjoyed learning about each and every single of the projects.

Just to give you an example of what else can be found in the book:

–       Webpaintings. An Internet site which looks like a website but has no functionality and therefore exists only as a painting. Some examples from the gallery: THE_WHITE_WEBSITE, THE_BLACK_WEBSITE, AnuScan Inc.

–       Chinese Gold. A project about Chinese „Gold Farmers“ – teenagers who are employed in digital sweatshops to play online games such as World of Warcraft. They produce in-game currency, equipment and characters which are later sold by the companies to American and European gamers via eBay.

The double feature of the book leaves me a little puzzled. It seems that the main book consists mainly of media material describing each project, while the accompanying book functions as artists‘ commentary on the projects. I find this division slightly confusing. If the reader wants to grasp information about a specific installation, they have to browse through two separate books, chapters of which are not coordinated. Not only are they not coordinated but also the accompanying book doesn’t contain information about all of the projects – just a selection.

Editing of the book also leaves a great deal to be desired. It should be decided once and for all is names and countries are to be spelled with capital letter (preferably yes, but if small case has to be used I would prefer to equalize this patter through the whole book).

Those complaints are only minor in my judgement, as the overall content of the book left me wanting to read it cover-to-cover. A nice bonus for those especially curious can be found at the back of each book – quite a big selection of texts written about UBERMORGEN.COM by journalists and numerous exhibition pictures (main book).