Hybrids for the Commons

Our notion of the commons hails from England, where a maze of paths precluded farmland from encroaching on collectively-owned sites, allowing people to trade, gossip, and entertain each other. These sanctioned areas were only shut down if they weren’t used.

Fun, right? But the new commons is also a highly contested site. Eric Kluitenberg, head of the media program at De Balie in Amsterdam, delved into some of the disputes in a presentation he gave at UvA on September 22. He explained that while traditions of public media certainly pre-date the internet (the glory days of cable access and zines) today’s greatly-amplified commons is reshuffling economic and cultural institutions, forcing us to reconsider the idea of public domain.

The problem is political (“knowledge is power”), but it’s also economic. The most obvious issue at stake is copyright; corporations feebly continue to clamp down on youtube uploads or p2p file sharing.

But there’s another critical issue: How can we keep materials free and accessible to the public, yet still help authors, artists, musicians, writers and other cultural producers make financial return? How can institutions – civic archives, libraries, universities – continue to afford expensive but valuable digitisation projects? Is there a way to make value out of the digital commons?

Kluitenberg proposed a few ways to subsidize our collective knowledge pool, including the older models of public financing, or advertising. But more interesting was the notion of innovative hybrid business models. Here are a few examples of this, though I’d like to find more – it’s a fascinating area to keep tabs on:

–Lastfm: a free internet radio site. The site makes money by a combination of ads, user subscriptions and donations.

–Open Access publishing. Free online scholarly journals that either require payment on the behalf of the author (in exchange for exposure) or are subsidized by academic institutions or the government. http://en.wikipedia.org/wiki/Open_access_journal.

–Prelinger archive. 48,000 films that you can download for non-commercial use for free, but profits from fees paid for a licensing clause.

-Publish-on-demand sites, like Lulu.com. Allows for free-of-charge self-publishing by uploading content to the site, then charges a fee to print the material based on print costs, the author’s margin, and distribution costs.

There’s more information about this issue on De Balie’s website. 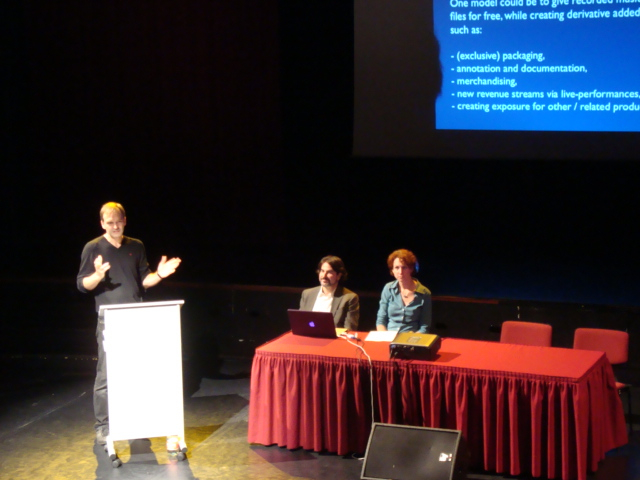 5 Responses to “Hybrids for the Commons”
Leave a Reply