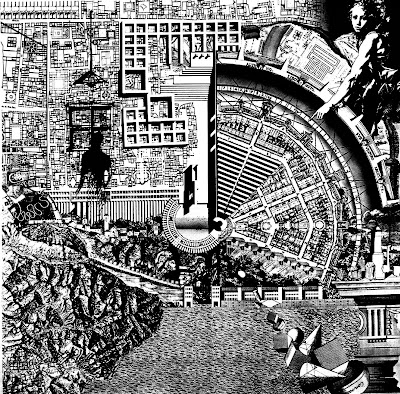 In his short story Tlön, Uqbar, Orbius Tertius the argentinian writer and poet Jorge Luis Borges imagined a place with a completely different perception of reality than ours.

In Tlön “the prime unit is not the verb, but the monosyllabic adjective. The noun is formed by an accumulation of adjectives. They do not say “moon,” but rather “round airy-light on dark” or “pale-orange-of-the-sky” or any other such combination.” Also, lacking the concept of subsequentiality brought by verbs (and heavily discussed by scholars like Marshall McLuhan and Derrick De Kerckhove), “they do not conceive that the spatial persists in time. The perception of a cloud of smoke on the horizon and then of the burning field and then of the half-extinguished cigarette that produced the blaze is considered an example of association of ideas”. This also reflects on Tlön’s philosophy: “The metaphysicians of Tlön do not seek for the truth or even for verisimilitude, but rather for the astounding. They judge that metaphysics is a branch of fantastic literature.”

To read the story many years later it’s kind of easy to think of it as a metaphor for the internet, even though there are some important differences between Borges’ imaginary land and the World Wide Web. Google continuosly caching the web makes time stand still, but the importance of real-time has been re-established after all the Twitter Search buzz that shook SEO blogs a few months ago. Also, sequentiality of events still matters a lot: any happening carries its own trail of cascade sub-events, parodies and top-down debate or conspiracy theories on the internet, and while blogging we’re desperate to link as much as possible.

Still, a crucial similarity to Tlön is the process of tagging. The self-selecting nature of meta-data, driven by user-generated tags and keywords ruling both Google’s ad services and the much more innocent knowledge-focused social bookmarking networks like Delicious, is one of the main features of Web 2.0 and the semantic web.

Just like “the classic culture of Tlön comprises only one discipline: psychology”, to plug our content in the furious information stream we all navigate by we need to use a shared – yet personal – folksonomy. Such categorization takes place spontaneously and in slightly different forms: via Twitter’s hash-tags, Delicious’ no-commas tag lists, Wikipedia editing and of course also via the detailed self-representing meta-data portraits we paint on Facebook to impress our friends and potential partners.

Social bookmarking constitutes a sort of super-structure stemming above the Google result-level, a savvier and more localized look for the wise internet user. Of course the over meta-stratification will see social bookmarking networks popping up overnight and being social-bookmarked themselves, but that’s also for the sake of the critical emancipation of users. Well, so we hope.

The Pagerank Era might be ending, and the big G’s metaphysics are now endangered by information-crazed users who seem to be all about selecting, filtering, passing messages – often before even reading them. Because, on the internet, spreading the word is more important than spreading conscience, and the Michael Jackson-related post mortem Twitter spree overtaking the Iran elections hype is an example of the volatile attention of the web crowd.

One thing I encountered myself in my Delicious and Twitter activity is selection, just like communication, becomes mandatory and hysterical pretty easily and the standards by which they work get lower and lower. Sharing links becomes a way of appearing, even if just for a flash, in someone else’s newsfeed, thus bringing traffic to your page. Ignoring the meaning of bounce rate, most of us think having complete strangers peeking in our little web-shrine will get us more friends, but we’re wrong.

Anyway accurate web content is still possible, available, and worth spreading, so it’s a bit of a pity the internet’s custom to over-do is also spoiling this second layer of user-selected information, pushing content up to a third level to which a next one will follow. The valid content might stay in the surface, but it’s harder and harder to keep track of it, especially when folksonomy itself is not an exact science. Tags are arbitrary and subject to capitalization and typos, plus each platform has their own comma and space standards. Needless to say, stuff gets left behind.

Web 2.0 is great and we all love it, but it also constitutes the turning point after which taking part in this folksonomy and contributing to such a collective knowledge become an urge, an almost mandatory command to be there. There is an egotistical aspect to distributing (selecting+sharing) information through social networks, an unhealthy frenzy to communicate something you haven’t had time to make your own. The rise and fall of so many Twitter hashtags is just the most recent phenomenon of a deeper change in internet use.

“The contact and the habit of Tlön have disintegrated this world. Enchanted by its rigor, humanity forgets over and again that it is a rigor of chess masters, not of angels. Already the schools have been invaded by the (conjectural) “primitive language” of Tlön; already the teaching of its harmonious history (filled with moving episodes) has wiped out the one which governed in my childhood; already a fictitious past occupies in our memories the place of another, a past of which we know nothing with certainty – not even a that it is false. Numismatology, pharmacology and archeology have been reformed. I understand that biology and mathematics also await their avatars… A scattered dynasty of solitary men has changed the face of the world. Their task continues. If our forecasts are not in error, a hundred years from now someone will discover the hundred volumes of the Second Encyclopedia of Tlön.

Then English and French and mere Spanish will disappear from the globe. The world will be Tlön.”

Or maybe not. I know no internet user who would have the patience to read a hundred volumes.