While thinking about what the future of social networking sites might be, I became curious about what Wired or Forrester think on the topic, what’s the trend?

Wired also mentions that Google has taken a step toward bringing down those walls, when they announced the Google Wave and the promise of a single log-in open platform for real-time communication and sharing media, where any user content poured into a Wave based system will be accessible by anyone that the user has granted permission to.

According to Wired’s article the future has single sign-on and is a myriad of services built on an open garden platform that depends only on what content users want to share and with whom.

As I see it, this might lead towards the googlization of social networking sites, pretty much what Google has been trying to do with Android on the mobile market.

Then I found out a Web Strategist article on this subject that portraits users as consumers. It also mentions a disjointedness of their social experiences because of their separate identities in each social network they visit, and once a step in technology is done to enable portable ID, begins the transformation that will create an evolution of social networking sites, going from separate social sites into a shared social experience, transforming ecommerce and advertising.

During the PICNIC event I experienced the way participants worked and played together, using an RFID device, which allowed the PICNIC website to publish the results of such joint venture online in real time, and moreover connecting instantly those participants in a social networking way.

It was based on this and on the previously mentioned concept of a portable ID, that I thought about how much I love the idea of RFID as a tool that helps users to meet new people in a different way. A new kind of social networking sites and a new kind of experience for the users.

A kind of a reverse social networking experience: you connect with someone based on a physical world collaboration, not shared interests per se (like music, professional experience, etc.), someone whom you might after the collaboration not even know the name/nickname of, and then, if you are interested in knowing more about that person or even contacting him/her, you have the online connection to find out.

Even though it might appear to be just a slight change of the social experience, it opens possibilities for different types of interaction.

So I searched for some examples of what such enhanced version of Social experiences would be and found some interesting examples.

On the 25th Chaos Communication Congress that took place in Berlin last year in December, the congress attendees had RFID badges and there was a system that featured a real time proximity detection, so the attendees could see which other users were nearby, and then a web interface provided participants with the ability to find people with similar interests, see where they’ve been, what they’ve been doing and with whom.

A step forward on this type of social experience that links the physical world to the online world in real time was the one that took place in the Hypertext Conference in Torino this year. The attendees of the event enrolled in Live Social Semantics (LSS) by volunteering to wear a RFID badge that detected face-to-face proximity. 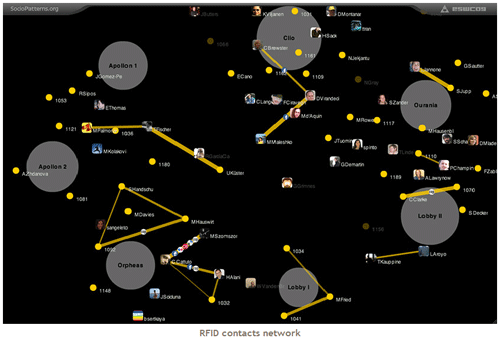 The physical world identity of an attendee was associated with multiple online identities (Facebook, Flickr, Delicious, and Last.FM) of their choice by creating a user profile in the LSS web interface. After having created the profile, the system gathered data from these systems in the background and recorded online friendships and shared interests.

By acquiring and integrating all this information from the attendees, mashing up physical world social contacts and online friendships and interests, in real time, and showing it on a live web-based visualization chart, offered the attendees a new level of networking services.

This experience provided the visualization of real-time social interactions of the attendees during the conference, and they could for instance invite to Facebook other attendees that they met face-to-face earlier. It also enabled them, before the conference, to have access to the list of persons within their social networks that would be attending.

Surely these experiences have a very well defined context and serve a purpose: to enhance the experience of the attendees in a certain event. On the other hand there are also issues about privacy that might prevent this kind of experience to jump from a closed environment to other and wider contexts that would bring together our physical world experience with our online experience, where we could share our thoughts, friends, consumer preferences, etc.

It would be interesting to explore if, when using an open platform that aggregates applications with different purposes, having RFID as one of its information gathering inputs, what kind of privacy issues such system would raise, based on how much have we already given up on our privacy with the social networking sites as we know them today; how much the governments might legislate and how much are we still willing to give.