Time to get social online, but why?

Why do we socialize online? Because “human beings are social animals,” Aristotle would say so. What he meant was that our identities and realities are shaped and formed within a society, in transactions with other people and structures in the particular context; More than two thousand years later in 1985, a man called Alasdair Maclntyre choose to interpret Aristotle’s idea in a brand new way; he claimed that we humans are story-telling animals: who we are, how we are, where we happen to be, and whom we are with depend on what kind of coherent narrative of our search for a good life we seek to tell and maintain. These two different approaches help explain why people today still have strong needs to socialize with each other, even though most of our activities are highly connected to computers in the digital age.

With the rapid development of current social networking sites, we are now replacing more and more face-to-face interaction to virtual ones with the aid of internet. Social networking sites are mushrooming not only because of avid programmers, entrepreneurs who look for opportunities, but marketers, celebrities, and politicians also hope to reach out to the general public.

Research to this field mostly involves with strategies for marketing and promotion, as well as critics of privacy and freedom. Nevertheless, internet users’ social needs for being part of the online social networks are seldom mentioned. Are social networking websites created to shape our social realities, as Aristotle claimed? Or are internet users abusing SNS websites to fulfill their social needs for free, like Maclntyre stated that human beings are naturally story-telling animals?

Then, what exactly are human’s social needs? As internet users gradually accumulate their patterns of behavior in this computerized petabyte age, it is obvious that Maslow’s hierarchy of needs doesn’t seem sufficient to explain some of the interesting phenomenon happening in today digital world. Here are two examples of how internet users reveal a niche but strong participation as observed in Asia’s popular social networking websites:

Like Twitter, Plurk provides micro-blogging service that allows users to send instant updates through short messages or links, which can be up to 140 text characters in length. What distinguished Plurk from Twitter is its display of a user’s profile page which shows a timeline which lists all the updates received in chronological order.

Printscreen of Plurk page, from Mr. 6 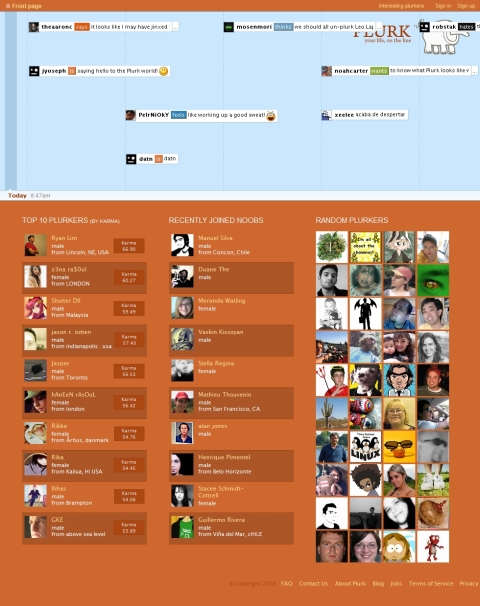 The Canada-based Plurk was launched in 2008 and have attracted more than 2.5 million registered users. Plurk is most famous among Taiwan, Indonesia, Philippines, USA, and India[1].

The frequent, instant interactivity between users has turned simple babbles into an online chartroom, and it is one of the popular features that attract more babbles because it is Plurk users’ intention to make the wave (as a Plurk message) bigger.

Nico Nico Douga is a video-sharing platform like YouTube. The most spectacular innovation of Nico Nico Douga is users may post comment directly on top of the video image itself. The format of comments is editable and users can see other users’ comment appear on the screen for 4 seconds or so.

Printscreen of Nico Nico Douga , from Marshall Kirkpatrick of readwriteweb.com

This Japanese website is ranked top 14 domestically[2]. Among its 8.4 million registered users, more than 500 thousands of them pay for upgraded services[3].

Different from Youtube, Nico Nico Douga creates an instant communal environment for users who watch that video. Users are encouraged to jump in the video and make comments right at the moment during the video.

Both of these two social networking websites has something in common: 1) the importance of instant feedbacks, 2) the neglect of user authenticity or identity. And 3) what distinguish Plurk and Nico Nico Douga from other SNS website is that user-generated content is visualized (see a commercial video on Nico Nico Douga) and can become piece of art in their platform. None of the above actually relate to Maslow’s interpretation of ‘social needs’ which look for friendship and intimacy. A further contemplation for us to understand if there is a difference between people’s social needs in the real and the virtual world.

Social media is powerful because networking is predominant in today’s digitalized world. David Reed in 2001 predicted that the ‘network effect’ of potential group membership can eventually dominate the overall economics of the system, even if the utility of groups available to be joined is very small on a peer-group basis[4]. This is based on the Reed’s Law which claims that in a Group-Forming networks (GFN) with n members, the number of possible sub- groups equals 2n. As well as Barry Wellman, the Canadian social networking scholar, foresees even earlier than Reed that “the person—not the place, household or work group—will become even more of an autonomous communication node[5] “

In sum, what we can research in social media should not limit in the technological development and its impact of these companies; rather, we may expand from user behavior to the hidden social needs. Through a better understanding of the different needs of one’s real and virtual life, it would help bring us a broader perspective of the current new media theories which are under discussion today.