“Who Do You Think You Are?” —-Everyone is Narcissist

I admit that I am a fanatic. When I began to use twitter this week, I do find a new world: wow! I can communicate with celebrities! A lot of them use twitter to tell us what they are doing, eating, awake or not. Celebrities even become a big drive for twitter’s popularity.[1]At least for people like me, following celebrities and waiting for their replies become an important thing in my daily life. I don’t have many friends of real life in twitter, 90% of people that I follow are celebrities. I believe that they are real ones and tweet them continually, looking forward to their replies.

At the same time, there are more and more normal people become my followers, I never know them before and don’t know how they find me as well. But it is obviously that people enjoy updating their tweets, and enjoy being replied. The way they follow others is in fact to help themselves being noticed. It is not hard to find that every second there are hundreds of thousands of tweets updating, but here I want to ask twitter users, do you really read others’ tweets and reply to them seriously?

Personally, in order to be polite and respective, I always follow back to people who follow me, even I don’t know who they are. Nevertheless, there is one thing I am sure is that replies make me happy, no matter who do the reply. The more I use twitter, the more I feel that I am in the spot. Although I am not a star, I would like to tell the whole world what I am doing and what in my mind. Twitter creates an illusion that there must be some people noticing me. Then I read an article from the new york times, and suddenly realized that “Everyone is narcissistic.”[2] It says that “‘ Narcissist’ is among our current favorites. It has been splashed at bad boyfriends, successful executives, reality show contestants, users of YouTube and Facebook, and, obviously, celebrities. ” Which makes sense that narcissism is the main cause that leads twitter become popular. With the development of the modern society, various platforms make it possible that people could be paid attention in public. Although some people are common in the real world, they could be welcomed in virtual internet work. In twitter, no one cares exactly who you are, but you can feel that you are “really exist”. Replies and the number of followers arouse the “loving one’s self” egotism, satisfied people’s narcissism, not even mentioning those celebrities!

Celebrities like living in the spot much more than others. Exposures increases celebrities’ popularity, no matter in the public or in the virtual social networking sites. It is definitely that the reason for celebrities using twitter is that twitter satisfied their narcissism as well. So what will happen when celebrities’ narcissism meet normal people’s narcissism on twitter? Like what I referred in the first paragraph that I followed and replied a large number of celebrities. However, 5 days past, I haven’t received any reply from any celebrities. They asked questions through their tweets, and I tried my best to reply them as soon as possible, but they all ignored me. Suddenly I feel so frustrated. I searched on the internet, found that lots of people as me feel annoyed by this, and even tried to find a way to make celebrities notice them. Here is page about “How to Get a Celebrity to Reply to You on Twitter”to help normal people to get reply by five steps. And there are even some websites (for instance “celebritytweet”) about real-time tweets of celebrities so as to stalk them, you can also find the chances of friendship with celebrities by digital calculation on their replies. 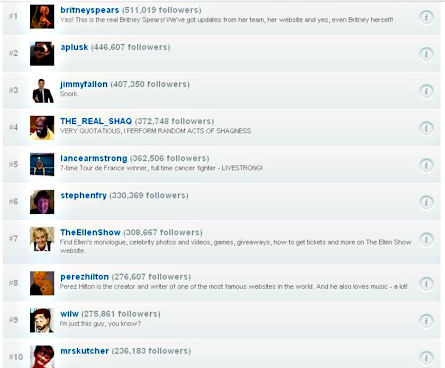 Except celebrities, I only see the homepage changes quickly since other normal people are updating their tweets, but I am so sorry to admit again that I always ignore them because I only focus on myself. I focus on what I will write my tweets and focus on my replies. Yes, this is narcissism. Celebrities feel the same way as we feel, and their large number of followers will of course make them enjoy a lot. The way people following celebrities is just one-side affair, maybe in only 2 minutes our tweets will be in the second page of the celebrity——because there are thousands of followers

Everyone is narcissistic, “twitter” offers people an enough environment of narcissism for us, but at the same time, celebrities use their twitters to tell us a truth ——“Who do you think you are! ” A lot of my friends don’t use twitter, they think it is boring and tedious. Maybe they have realized the truth. It is possible that all the time you just update your tweets to yourself, you just perform in front of yourself. So I decide not to be silly, I would rather give up using twitter than wasting my time to wait for celebrities, hoping they would satisfy my narcissism.

So I wrote down these things above with frustration and unhappiness. Before quitting using twitter, I entered twitter again just to take a last look. But guess what?! I even screamed out! Coco Lee—-one of the most popular Chinese singers replied me! Although I have to admit that I have tweeted her more than ten times before, now I still get what I want to get. Who do I think I am? I am just a little person, but I can feel I am alive and real exist. At least there is one celebrity replies me. If we could live happier with our narcissism, why not use twitter?