A lot of journalists discussing Twitter seem to fall back on an old habit, criticize. I guess it is a journalistic-reflex, maybe even a purpose to criticize. But in case of Twitter it is regrettable the discussion didn’t moved forward. The role of journalism might start with a critical look, but it definitely shouldn’t end in criticism only. 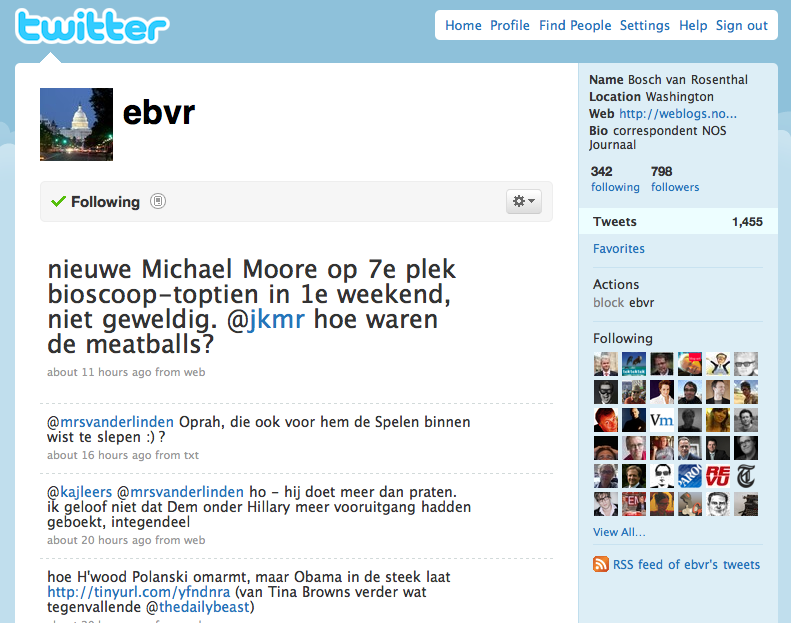 It might be just a ‘journalistic echo’, but most criticized is the lack of meaning and purpose of Twitter. “I don’t care what people are doing right now”. In my opinion this is a high culture reflex and can placed next to ‘stupid morons watch garbage on their televisions.’  First it is a reflex because it seems to be smart to criticize. Secondly, most journalists didn’t even discovered Twitter well enough to tell what Twitter is, not to speak about thorough research at all.

I think Twitter is fun to a lot of people, and Twitterers are not stupid in general. Of course, you can use Twitter in various ways, like you can watch ‘garbage’ on television. But on Twitter, the follow button even gives more control compared to the remote. Twitter is (to some extend) what you would like it to be. (So if you would like to see garbage in it, you can). But it is always (more or less) personal. The journalists seem to equate personal to useless. In that way speech would be useless as well. Again, you can use Twitter, or any other form of communication, for useless and useful purposes.

In my humble opinion the personal aspect of Twitter offers opportunities, ironically especially to journalists. The Dutch news correspondent Joris Luyendijk expressed his concerns about journalism in his famous book “Het zijn net mensen”(2007) (later translated in “Fit to Print”). Luyendijk discovered, during his work as correspondent for various media, the impossibility to (dis)cover and report the ‘facts’. The book examines the limitations of journalism. There are always two sides of the story, but the media doesn’t give enough space or time to cover both well. A journalist, according to Luyendijk, is always coloured by his own experiences and limited to borders of journalism. The world doesn’t always fit to journalism, and we should be more clear and fair about that, wrote Luyendijk.

In my opinion the Dutch USA-correspondent Eelco Bosch van Rosenthal (on Twitter @ebvr) shows that Twitter can help to achieve Luyendijk’s ‘mission’. Bosch van Rosenthal uses Twitter to extend his reports like he also uses a blog. Twitter’s special characteristics add a dimension to other tools like the blog. First Twitter seems to be more personal in general; again it depends on the Twitterer. The conversation benefits in two ways; people seem to be more polite and give a more personal view. Secondly Twitter is easy and ubiquitous. You install an application on your mobile phone and computer. Writing a ‘Tweet’ is much easier than writing a blogpost. You can see these characteristics in Bosch van Rosenthal’s tweets. He writes about his work, what he reads and finds interesting. For example:

“typed the words Iranian regime and realize all of a sudden that we also never speak of the American regime. Pavlov. Shame.”

But he also replies to and talks with other twitterers. It doesn’t only make him more accessible, but you are also able to place his items in the news better in its context. You might not know him in person, but you can see what influence him, and where some conclusions come from.

Twitter is not the only and definitely not the perfect or complete solution to the journalistic problems Luyendijk pointed out. Eelco Bosch van Rosenthal is not a journalist in the complicated Middle East. The journalist still makes (journalistic) decisions what he will (and would like to) tell. But at least it makes it easier to place the journalistic story in its context. The larger public don’t use (or even know about the existence of) Twitter. Last but not least 140 characters can easily be misunderstood. But the better journalists experiment with new possibilities to inform better, instead of their critical reflex to the new.

Twitter can enrich a view on complicated problems in the world, and can make journalistic work easier. Most theorists (Castells 2009, Zengotita 2007)  acknowledge a huge role for media in society, often even seen as information society (Webster 2006). The least we can do is research new possibilities well, instead of lean back in our comfortable habits. Even if it can only solve journalistic problems a little, and I think it can, it would be worth to experiment with Twitter.