Before the rise of twitter there already existed older -digital- communication devices that shared the same idea: short and fast communication between people. Those were mainly writing, faxing, emailing, chatting and later sms text messaging. In the case of chatting these messages formed whole conversations while short text messages (sms) were at the beginning mostly sent to let someone know he wouldn’t make an appointment on time or to ask how someone is doing. When the mobile phone rates became lower people started to use sms more to ‘slow chat’. Twitter is the accumulation of this. It is used to let people know what you are up to and where you think about at any moment in time and people can easily react on this.

All these devices are not without consequences for the general communication between people. The advantage of Twitter on sms is that you don’t sent a message to one person at a time anymore but everyone who wants can receive and read it and react on it immediately. This is possible because everyone can select whoever they want to follow on the website. The downside of this is that it increases the possibility that people read things about you they were not supposed to. It also makes communication a lot more impersonal because you don’t write messages that are written for one person in special anymore. 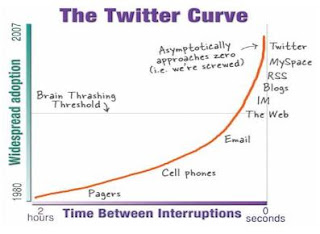 These electric communication devices also replace actual conversation more and more. People don’t get together anymore to talk but communicate by telephone, Skype and most of all their cell phones. Because almost everyone has unlimited internet on their phone nowadays Twitter has been capable of coming a widely, easy and cheap way to communicate.

People are attracted to all these devices because they have a natural desire to express themselves. Expression hereby matters as a form of believe as is stated by Tolstoy.1 People have to discharge their feelings and thoughts and communication is hereby therapeutic. Twitter takes this to the max by telling everyone everything in a easy way.

So at one point Twitter helps people to express themselves. On the other hand it makes this communication more unpersonalized than older devices. This alienation is a specific characteristic for modern society. This is caused by the professionalization of humanity. Messages are no longer personal. The life of individuals is captured in a network of professionalized processes that get more and more complex as is stated by van den Breambussche.2

In the future communication will change even more in my opinion. The image will become a more important medium to communicate because one picture can carry a lot of information. It is also evident that people remember more information from images than text. The transition from text to image is already a long time evolving but I think this will be the next main development after Twitter since shorter text messages are not really possible so we have to find other ways to express ourselves even easier in the future. A good example of this are emoticons that already exist for a while. They enhance the emotions expressed in a message that is send and can even be responsible for the correct understanding of a message. This is a way of expression by representation. Emoticons hereby bear the trace of a particularly humanized presence.3 In the future these images will probably be moving though. Images are also very important to use in our messages because as is stated by Gunkel emoticons form the artificial warrant and guarantee of the human in cyberspace.4 This will become more important in the future when our world becomes more and more controlled and inhabited by robots and other computers in the professionalized processed world we live in nowadays.

So although Twitter seems the ultimate communication device I think in the future we will become more dependent on images to express (and prove) ourselves. Hereby we must prevent that personal communication will disappear.

Eldridge, R. An Introduction to the Philosophy of Art. Cambridge: Camebridge University Press, 2004.

1 R. Eldridge, An Introduction to the Philosophy of Art (Cambridge: Camebridge University Press, 2004), 97.