South Park and the Demise of the Big Other

Unsurprisingly, yet another South Park episode has made the news recently. And as usual, the comments have ranged from praise and approval to shock (and even subtly worded death wishes?).
In pure South Park fashion, “Dead Celebrities” is a controversial mix of media/social critique and relentless celebrity-bashing, in shape of a Sixth Sense parody.
This time, the reason for media commentary is the daring politically incorrectness featured in the episode, which included a dead Michael Jackson finally realizing his dream of becoming a white girl in his afterlife and American TV salesman Billy Mays selling a washing product for blood-stained underwear (without mentioning a rather tactless appearence of David Carradine in stockings with a rope around his neck).

Parker and Stone’s fine-tuned postmodern pastiche formula didn’t fail to amuse and get the usual media coverage, but fan reviews are kind of mild and the accuses of poor taste/bad writing are no news. Most likely, there will hardly be any reference to “Dead Celebrities” in your newsfeeds next week. The reason why South Park has been so long lasting and true to itself for so many years now is the unprecedented freedom its authors are able to get from Comedy Central. Apart from a few notable examples (like the Scientology-bashing “Trapped In The Closet” – which allegedly led Tom Cruise to take action and have Viacom, Comedy Central’s owner, pull the episode’s second airing – or “Cartoon Wars” – where the network itself didn’t dare showing a depiction of prophet Muhammad right after the infamous riots occurred in the Islamic world after the publishing of disrespectful cartoons by a Danish newspaper), the show has lived a relatively undisturbed life so far and lives on in its very own niche on cable TV and the internet.
The show’s particular location in the global mediascape is crucial to both its freedom and attitude: cable viewers know what they pay for, and the decision to make the show go online only hours after the TV airing is proof of the network’s respect for the internet audience, which has been supporting it from day one. South Park not being “mainstream” is then not just a concern for Parker and Stone, but also the very reason of its “being South Park”.

The series is a perfect example of pluralization in contemporary media. In his book South Park Conservatives, right-wing journalist Brian C. Anderson lists it as one of the many examples (along with FOXNews, talk-radio and so on) of the downfall of liberal bias in mass communication.
Although Anderson’s interpretation of the show is quite biased itself (the show definitely tends more towards a libertarian position), his point on its media collocation strikes a nerve. The horizontal, de-centered, postmodern nature of today’s media (especially the internet) makes them a perfect ground for the show to prosper without compromising too much: not only are its explicitness and hysterical display of the unshown and untold typical of porn and gore (two major drivers of internet attention), but South Park’s libertarian values (see “Gnomes“) also perfectly match the free market and free thought utopia embedded in the globalized web.
Despite its zen-infused morals (Parker’s father tried to raise him a Buddhist and both him and Stone worked on a series of animated cartoons illustrating some of Alan Watts‘ speeches), the show comes across as cynical and disruptive, an in-your-face satire always negating two opposite and equally wrong positions to defend a middle-ground “truth”, a sort of compromise of good living.

Both South Park’s urge to destroy illusions through irony and its more subtle proposal of a middle ground are precisely the type of postmodern practices philosopher Slavoj Žižek has been warning us about with his writings.
Through advocating a return to Hegelian dialectics, Žižek’s work reminds us of the importance of the Symbolic (“the realm of radical alterity: the Other”) in keeping ourselves safe from the “unbearable freedom” of the Real (“that which resists symbolization absolutely […] it is impossible to imagine, impossible to integrate into the symbolic order”). The Real cannot be understood, it can’t make sense to us and we have to filter it by forcingly dividing it into significants. A way of doing this is the creation of our subjectivity via the definition of the Other, a “communal network of social institutions, customs and laws” that are really a “kind of collective lie to which we all individually subscribe” (all quotes come from this page here).
We need to define the Other by opposition in order to know who we are, not to be blown away by the terrible and traumatic wholeness of the Real.
The philosopher’s critical views on liberal capitalism, New Age religions and ecology, as utopian tools to perfect the homogenous system of the globalized world, are also in strong contrast with Francis Fukuyama‘s argument on the end of history and call for a revitalization of the Symbolic, now barely kept alive by conspiracy theorists and paranoia. 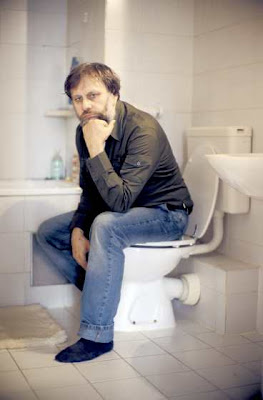 Although one of the smartest, most powerful and interesting features in South Park is media criticism, by resisting censorship (or conveniently playing the role of enfant terrible under the corporate banner of Comedy Central), what the show does is “filling the gaps”, “saying it all”, exemplifying at the same time the unity between the show itself (legitimated by air space and success) and its not-so-Other counterpart, the media it criticizes.
The symbolic value of the Other, the possibility of censorship or the actual likeliness of a cancellation are de facto disintegrated by an eager viewership, no matter how specific or limited in comparison to the huge spectrum of the mediascape.

Unlike comedy pioneer Lenny Bruce, who got arrested and eventually defeated by the Law, South Park keeps prospering on a much more media-savvy, success-bred crusade in which the most important value is enunciation itself, the possibility to answer an urge to speak so typical of us internet-using generations. But such prosperity is hardly as effective in generating the dialectic opposition with the Other that Bruce famously raised: a petition in his favor was signed by the likes of Bob Dylan, Susan Sontag, Henry Miller and Allen Ginsberg, along with comedians like Dick Gregory, Godfrey Cambridge and Woody Allen.
If we think about it, this is not really surprising if we think typical ’60s-fashioned countercultural people were looking for something “far out“, whereas the South Park generation is laughing at “inside jokes”.

The Demise of the Big Other is of course not Parker and Stone’s fault, they simply live in a different historical period and work in a much more diverse media environment than comedians used to a few decades ago. Still, by critically reflecting on its limits, South Park can help us all better understand the crucial turn we are taking.