Cell phones applications for development might be what sociologist Saskia Sassen calls countergeographies – they piggy back on mainstream infrastructure produced by a global corporate economy, but for their own aims, including political struggles (or crime). It helps to look at two examples of cell phone applications that illustrate what she means.

But first some theoretical context. Sassen is a leading theorist of globalization, dismantling and reconfiguring traditional scholarship on the topic [1]. In Territory, Authority, Rights (2006), for instance, she looks specifically at globalization’s affect on local actors, once-powerless individuals who can now participate in global politics via the internet without having to leave their communities. They build powerful, transboundary networks with other local actors around the world who deal in similar struggles. These networks route around global institutions or hierarchies of state, making cyberspace a potentially more effective arena for local politics than the local political system itself.

Sassen’s ideas challenges traditional sociological work in a few obvious ways. Whereas the local is typically defined as place-bound and nested in hierarchical state systems, today’s locals fan out into horizontal global networks of autonomous actors connected by the web. The local scales laterally and becomes what she terms “multiscalar.”

Sassen also shakes up the discourses trumpeting digital networks’ compression of space and time -their supposed ability to break down all barriers. She shows a more complex dynamic. Local context plays an enormous role in shaping the technical capacity of any device – technology is embedded. In turn, these technologies “also have the effect of revalorising locality and local actors.” [2]  The internet’s transboundary reach doesn’t relinquish the particular conditions of the people who utilize it; instead, local practices can retain their specific identities even as they scale. They are “deeply local yet intensely connected digitally” [3].

While Sassen investigates these ideas using the internet specifically in Territory, Authority, and Rights, you can apply her same concepts to cell phones, and in particular new cell phone applications. 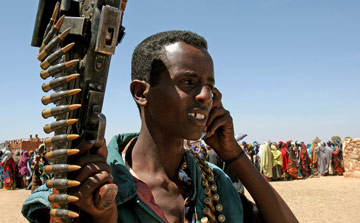 The Economist reported last month that there are now 3.6 billion cell phone owners in the world, with three quarters of these in developing countries. These burgeoning markets in the global south give rise to new trends in the telecom industries itself, including a growing number of new mobile phone applications in poor countries. These are two-way services that provide and collect information on agricultural advice, health care, money transfer, and market reports.

One of these appliations is Frontline SMS, a free software that uses the simple sms messaging as a platform for complex tasks: running surveys, providing automated information, broadcasting announcements, conducting general communications for groups. Frontline SMS was developed for countries with low bandwidth and less ability to organize via the web; it illustrates how context drives technological innovation.

In 2008 Kubatana.net, a Zimbabwean human rights group, used Frontline SMS to set up an sms election service to text up-to-date election information and results. The app could also to receive responses from individuals, which were then compiled and distributed by an electronic newsletter as well as posted Kubatana’s website.

But you can also see how Frontline SMS can affect scale. The activities in Zimbabwe can inspire other NGOs to use the application in response to democractically challenged elections in their respective vicinities. Each instance can learn from the one before, and movements can gain strength by a growing global network of localized, horizontally spread activism.

Grameen Foundation is a microfinance NGO that also develops phone applications for the poor. In Uganda, Grameen’s applications help rural farmers track crop diseases by sending digital photos and GPS coordinates to scientists in Kampala. The data aids in scientific understanding of certain environmental conditions and can also be used by international NGO databases, in turn building a wealth of free, accessible knowledge useful to other NGOs and governments.

Grameen also aims to train locals as “community knowledge workers” – a microbusiness of local information specialists whose cell phones retrieve helpful data for their communities. This includes updating farmers on fair market prices or pairing local stocks of food or goods to potential area buyers. This creates microeconomies and local knowledge centers with the potential to challenge former structures of top-down power. After evaluating the application’s effectiveness in pilot countries of Uganda and Indonesia, Grameen will introduce them elsewhere, making way for a global network of community knowledge workers – domestic actors participating in emerging international solidarities.

This dynamic between local actions and cell phone apps creates new political potentials. Local actors can constitute themselves by an awareness of a global audience. As Sassen writes, “The technologies, the institutions and the imaginaries that make the current global digital context, inscribe local political practice with new meanings and new potentialities.” [4] Citizens engaged in a housing struggle, for instance, can now know of multiple other localities around the world engaged in similar struggles – a self-reflexivity that can shape local political practice. For today’s local political actor, scaling itself becomes part of the political strategy.

[1] In The Global City (Saskia Sassen, The Global City: New York, London, Tokyo. Princeton, NJ, 1989), for instance, she deflects the conversation away from multinational entities (the UN, WTO, the World Bank, the global financial market, globe-spanning digital networks) to investigate the agglomeration of the service industry in major cities, where the physical headquarters of multinationals gave rise to concentrations of new services  (hotels, restaurants, repairs, travel, care rental, insurance, and a new marketplace of non bank financial institutions) that help multinationals manage decentralized production. While most sociologists characterized globalization via this spatial dispersal of production, Sassen looks at a centralization of ownership and the services needed to produce it.
[2]Dale Leorke. Power, Mobility, and Diaspora in the Global City: an interview with Saskia Sassen.
[3] Saskia Sassen, Territory, Authority, Rights: From Medieval to Global Assemblages. Princeton and Oxford, 2006, p369.
[4] ibid, p 370.